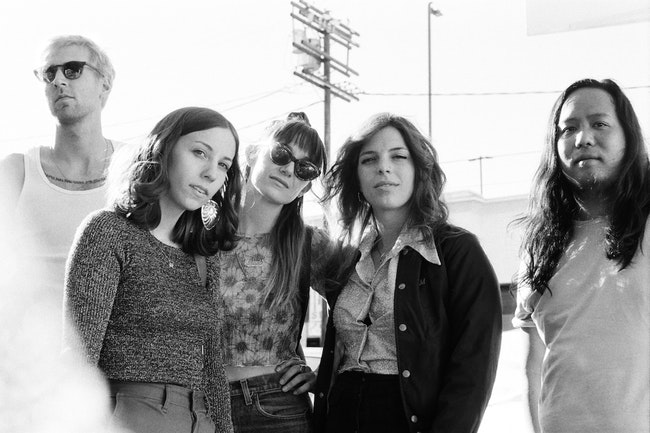 The Wild Reeds’ sound is highlighted by the interweaving vocal harmonies of three phenomenally talented front-women – Kinsey Lee, Sharon Silva and Mackenzie Howe – who swap lead vocal duties and shuffle between an array of acoustic and electric instruments throughout the set. They are backed by a rhythm section of Nick Jones (drums) and Nick Phakpiseth (bass).

Each with their own style, The Wild Reeds’ three songwriters make music that is dynamic and unpredictable. They write lyrics and melodies with the thoughtfulness of seasoned folk artists, and perform with the reckless enthusiasm of a young punk band in a garage. Warm acoustic songs and harmonium pump organ seamlessly give way to fuzzed-out shredding and guitar distortion.

With the upcoming release of ‘The World We Built’ on April 7, the Los Angeles-based quintet continues a national breakthrough that has been rapidly growing since the release of their EP ‘Best Wishes’ this summer. NPR Music critic Bob Boilen championed the band, saying “great singers aren’t easy to come by, so finding three in one band is something special.” The New York Times praised their live show, saying “the communal experience was amazing,” while KCRW (Los Angeles) called them “top-notch vocalists.”

Tickets to their forthcoming Neumos performance can be found here.