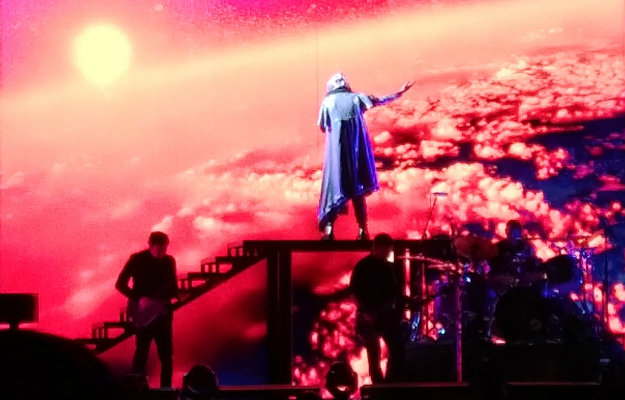 I’ve been a fan of The Smashing Pumpkins ever since their album Siamese Dream dropped in 1993. From there I discovered Gish and jumped on board for their next few albums and releases. I listened to that band for hundreds of hours in high school. In truth though, I really lost interest after the mega-hit double album Mellon Collie and the Infinite Sadness. That’s when the band started to go downhill in my opinion, the hits stopped churning out, and one-by-one the band members left the group for various reasons.

Billy Corgan continued The Smashing Pumpkins train for many years with other musicians and he stood alone as the sole member of the band. While I saw the band once back in their hey-day in 1997, I never bothered to see them again after that until this past Saturday night at Key Arena in Seattle. This was their (mostly) reunited tour with original band members James Iha and Jimmy Chamberlin back in the band. Going into the show, I really didn’t know what to expect.

Below is a list of what I didn’t expect and a summary of what happened:

Lastly, I didn’t expect the show to be as good as it was. I was skeptical that this was just a cash-grab from an aging band and that they can’t bring it anymore. But last month I listened to Siamese Dream three times in a row on repeat during a road trip and fell back in love with that album, so I wanted to give Corgan and the crew a chance. I’m glad I did because this ended up being one of the best shows I’ve seen all year. Yes, Corgan is obsessed with himself and if you’ve read any of his interviews over the past few years, he’s apparently crazy. But sometimes the best artists have a bit of crazy and awkwardness and it’s a trade-off for what makes them so good at their craft. I gained a new respect for Billy Corgan and what he’s doing as a musician and performer.

If you were ever a casual fan of The Smashing Pumpkins then I strongly suggest going to see this re-united unit. And if you were or are a huge fan of the band at any point in their career, then this is a must-see. It’s a little bit expensive, but you’ll get your money’s worth.