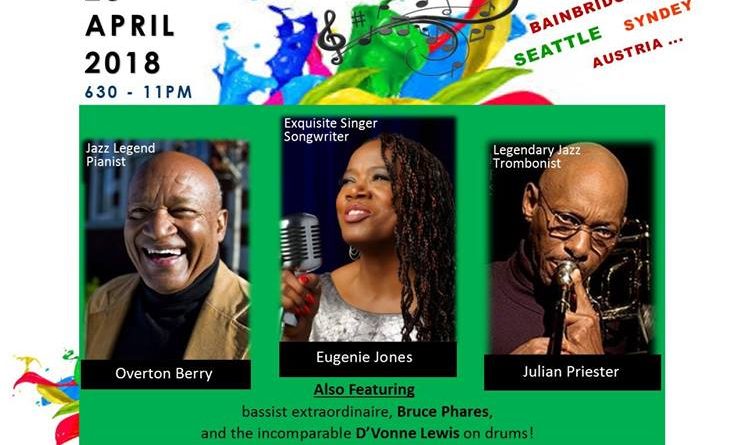 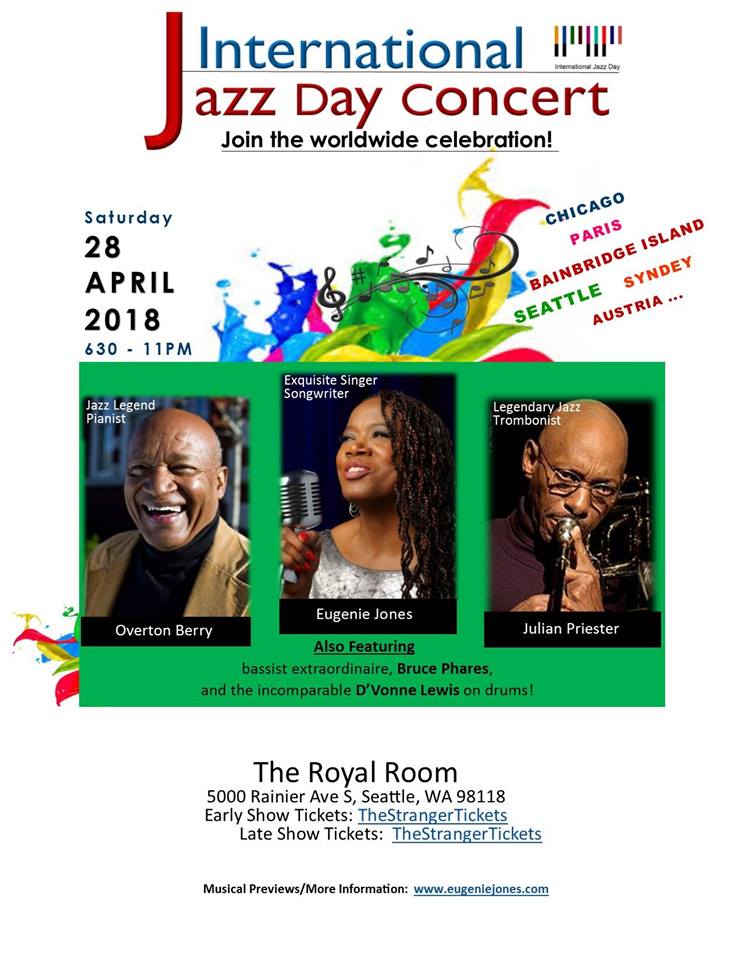 Launched by UNESCO and the Thelonious Monk Institute of Jazz; celebrated in Saint Petersburg, Paris, Sydney, Austria, and in cities around the world – International Jazz Day is a celebration of jazz and its immeasurable legacy.  A simultaneous, worldwide celebration of jazz, this event is Seattle’s contribution to the party. The evening features: Eugenie Jones; Overton Berry; Julian Priester; D’Vonne Lewis; bassist Bruce Phares.

EUGENIE JONES, singer/songwriter/producer/promoter is described as an artist that breathes emotion into music. Her “credentials are surprisingly impressive, considering she’s late to the game of jazz performance…In short order, the jazz newcomer racked up two Earshot Jazz “Golden Ear” Awards — 2013 “NW Recording of the Year” for her self-produced, debut album, Black Lace Blue Tears, and 2016 “Vocalist of the Year,” …as well as reaching the upper echelon of Jazz Week Review’s charts……”- Carol Banks Weber, AXS

OVERTON BERRY is described in the Pacific Northwest as “a living legend”, and his wealth of experience and generations of fans bear witness to this affectionate accolade. A beloved and respected presence through much of Seattle’s jazz history, the dazzling pianist has plied his trade in such roles as music director for Peggy Lee and mentor to rising local stars like guitarist Larry Coryell and vocalist Diane Schuur.

D’VONNE LEWIS is a first-call drummer to many bands and legendary musicians, nationally and worldwide. Lewis resides in Seattle, yet extensively tours and performs various gigs in styles ranging from jazz, funk, hip-hop, rock, Brazilian and African. Lewis composes for his own band’s: ‘D’Vonne Lewis’ Limited Edition’ and the hard-hitting, cutting-edge, 2014/2015 Earshot Jazz group winners and 2014 ‘Genius’ award-winning band, ‘Industrial Revelation’. In 2006, D’Vonne received the Earshot Golden Ear Award for Emerging Artist of the Year’ and has also received the 2013 Earshot Golden Ear Award for ‘Instrumentalist of the Year.’