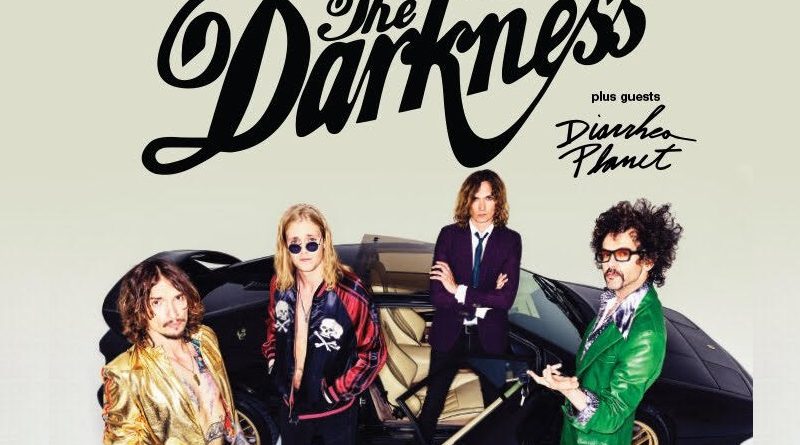 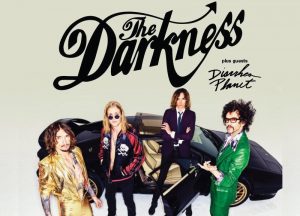 England’s most distinctive, multiple award-winning, platinum-selling, hugely entertaining rock gods and international pleasures THE DARKNESS – Justin Hawkins (vocals / guitar), Dan Hawkins (guitar), Frankie Poullain (bass), Rufus Tiger Taylor (drums) – released their fifth album Pinewood Smile on October 6, 2017. The Darkness is set to ignite stages across the land on the North American leg of their Tour de Prance, with special guest Diarrhea Planet, kicking off on March 29th in Los Angeles at The Fonda Theatre and wrapping in Dallas on May 2nd at South Side Music Hall.

Produced by Grammy Award-winning Adrian Bushby (Foo Fighters, Muse), Pinewood Smile finds The Darkness in electrifying form, delivering some of the most sharp-witted, infectious, humorous and dazzling songs of their career. Yahoo! raves, The Darkness are “back with an album of guitar-shreddery and Bic-flicking badassery,” Shockwave Magazine praises, Pinewood Smile is “Downright brilliant,” New Noise Magazine calls it “Completely mind-blowing” and Metal Nexus swoons, “The songs are expertly crafted nuggets of kick-ass rock and roll, stuffed to bursting with beefy riffs, intricate melodies, and cocksure swagger.” Kerrang!, Mojo, Q, Planet Rock, The Sun and Daily Mail give the album a perfect 4-Star rating.

Pinewood Smile boasts the glorious, hard-rocking, autobiographical “All the Pretty Girls”, the swashbuckling “Buccaneers Of Hispaniola,” the expletive-strewn howl of frustration that is “Southern Trains,” feel-good anthem “Happiness”, the hugely emotional “Why Don’t The Beautiful Cry?,” the globally anthemic “Japanese Prisoner Of Love” and the ode to pumping out smash hit after smash hit “Solid Gold” – in which The Darkness address the turbulent nature of the music industry and how they have enjoyed its flamboyant highs and spectacular lows.

Record Collector gushes about their live show, “Full of humour and foundry-hot-playing, other rock bands should learn from The Darkness.”