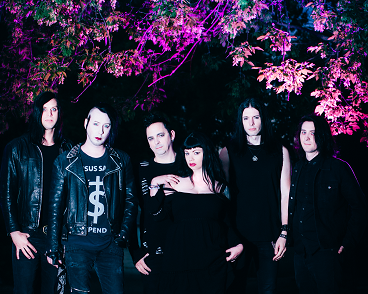 The Birthday Massacre to play El Corazon on October 13th

New wave/goth revival outfit the Birthday Massacre formed in London, Ontario in 2000 — originally dubbed Imagica, the founding lineup comprised frontwoman Chibi, guitarists Rainbow and M. Falcore, bassist Aslan, keyboardist Dank, and percussionist O.E. After recording a seven-song demo session, Dank left Imagica and the remaining members relocated to Toronto, where a second demo release followed in mid-2001. Upon renaming itself the Birthday Massacre, the group released its debut LP, Nothing & Nowhere, in the summer of 2002. With the resignation of O.E., the lineup welcomed keyboardist Adm and percussionist Rhim prior to recording a follow-up EP, 2004’s Violet. Adm quit the Birthday Massacre prior to an expanded European release of Violet on the German Repo label; in 2005, the band signed to the Metropolis imprint to issue the disc in North America and the U.K., adding keyboardist O-en for a tour of Western Europe. In 2007 the band released its third album, Walking with Strangers, on Metropolis, then set out on tour with Mindless Self Indulgence and Julien-K. Three years later, the band released 2010’s Pins and Needles, followed up quickly by an EP, Imaginary Monsters, in 2011. Following 2012’s Hide and Seek, which enjoyed modest chart success and a warm critical reception, the Birthday Massacre turned to their fans to help crowdfund their sixth album, Superstition. Released in late 2014, the album was supported by a major North American tour as well as tours of Brazil and the U.K. Compiling original four-track demos from their early days, Imagica was released in 2016. It was followed in the summer of 2017 by the studio album Under Your Spell.

They will be coming to El Corazon on this Saturday, the 13th.