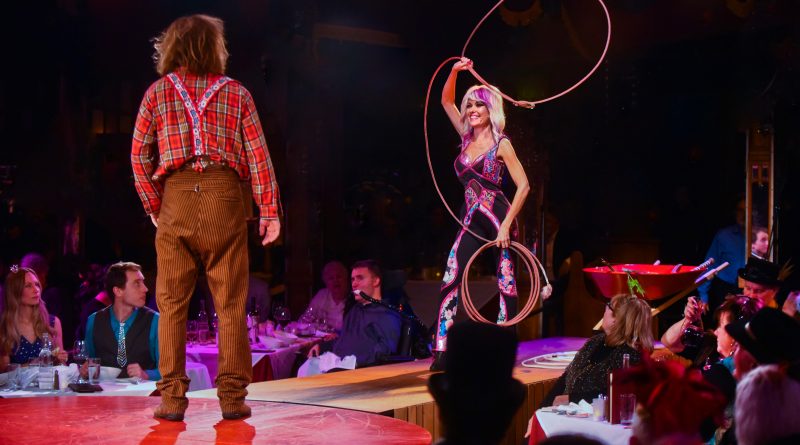 Teatro ZinZanni is the elaborate dinner theater production (tagline: “Love, Chaos, and Dinner”) that used to be sequestered under a large colorful tent adjacent to the Seattle Center. Given the hefty price tag (tickets start at $99), it’s the kind of show folks generally attend as part of a big night out, or to celebrate a special occasion like a birthday/mother’s day/etc. (humble brag: my first attendance at ZinZanni was as a guest of Soundgarden’s first manager Susan Silver, who bought out the house to celebrate her 50th birthday).

ZinZanni lost their Seattle Center home a few years ago, had a brief engagement at Marymoor Park in Redmond, and have now set up permanent shop (again, under that fabulous tent, which they call the spiegeltent) in Woodinville. In fact, Woodinville is the setting for the current show in the new space, Hollywood & Vine, “Hollywood,” in this case referring to Woodinville’s Hollywood District (the name taken from a place in the area known Hollywood Farm, now the site of the Chateau Ste. Michelle Winery). The joke is that the show’s characters, the boisterous Romanelli sisters, fresh from the Jersey Shore, think they are heading for Tinsel Town, and instead wind up in Woodinville, at that rural outpost, the Squak Saloon.

Cue the jokes about the backwoods hicks, local yokels, and Bigfoot. Which actually feels a bit archaic; surely in this day and age, the Romanellis would’ve found themselves amidst a group of suburban wine tasters wearing polo shirts and nibbling on cheese? Never mind. Like a musical from the 1930s or 1940s, the negligible storyline is merely a means to get you from one performance number to the next. But in this particular production, I felt there needed to be some more variety here; the majority of the performances seemed like they were acrobatic acts. Well executed to be sure, with nimble folks twisting themselves on ropes and hoops just above your head — but rather too many of them.

Another thing I felt there was too much of; audience participation. It’s something I’ve never enjoyed, because it’s all about having a laugh at someone else’s expense (“I find jokes about you funny. Why don’t you find jokes about you funny?”). Hollywood & Vine has three painfully long audience participation sequences; surely one would suffice? Christine Deaver proves to be quick with the improv quips though. “You’re all a bit monochromatic,” she observed of the audience’s attire at one point. “You going to a funeral tonight?”

One of the more notable non-acrobatic acts was Alesya Gulevich, who whirls more hula hoops than you ever thought possible around her lithe body (and has apparently set a Guinness World Record doing the same). There are some straight singing acts too, with Jen Ayers (of Seattle band Honey Tongue) being the showstopper in the later half of the evening. There are plenty of songs that crop up during the evening; here’s some titles I found scribbled in my notes: “Sisters Are Doing It For Themselves,” “One Way or Another,” “Thank God I’m a Country Boy,” “Me and Mrs. Jones.”

There’s a live, four-piece band; none of your pre-recorded nonsense here! Music Director Hans Teuber notes that this show has more of a rock feel compared to other ZinZanni productions, and he has no shortage of rock experience himself, having contributed sax to Mudhoney’s Under a Billion Suns album as well as appearing on records by the Briefs and Ani DiFranco, among others. Bassist Keith Lowe has journeyed from jazz to rock and back again (Wayne Horvitz, Stone Gossard, Bill Frisell), guitarist Igor Abuladze also plays with Nosretep, who just released their first album, and drummer Jose D. Martinez comes from a jazz background. It’s a solid, lively combo.

Now, on to the food. For those of you not familiar, you’re served four courses throughout the evening, in between acts. I was also given wine pairings for each course. The first course was a healthy appetizer of crunchy vegetables and hummus dip; tasty. The second course was a butternut squash/carrot soup with potato and ricotta cheese gnocchi; nice on a chilly night, though a bit bland. My server forgot to bring me the wine pairing for the first course, so I ended up getting both of them during the second course. First up was a Lambrusco de Sorbarara; not to my liking. Then a Rosso di Montalcino/Sangiovese; better.

Things really got cooking with the entrée. I opted for steak, and note that if you do the pairings you get two pairings with the steak dinner, and only one for those fish/veggie/vegan offerings. Both pairings were blends. I preferred DeLille Cellars’ blend to the Sparkman Cellars offering, the latter having a somewhat unsettling description as having “aromas of blackberry, ganache, wild game and graphite.” Um, graphite? (a server later suggested it was a reference to “soil”). The tiramisu dessert came with a sherry described as having a “viscous palate … rich in flavors of cherry pie, cigar box, toffee and roasted date favors.” Excuse me, cigar box? I couldn’t finish it, and opted for a nice Courvoisier instead.

Overall, I would give this current ZinZanni production a mixed review. The pluses: tasty food and service, energetic performances, some dazzling feats of derring do. The minuses: corny jokes, not enough variety in the acts offered, too much audience participation. I would also go without the wine pairings and just order what you like (there’s a full bar stocked with all kinds of alcoholic and non-alcoholic options). Hollywood & Vine runs through April, but Teatro ZinZanni is here to stay; a new production will follow. The Northwest’s most elaborate dinner theater show lives on.