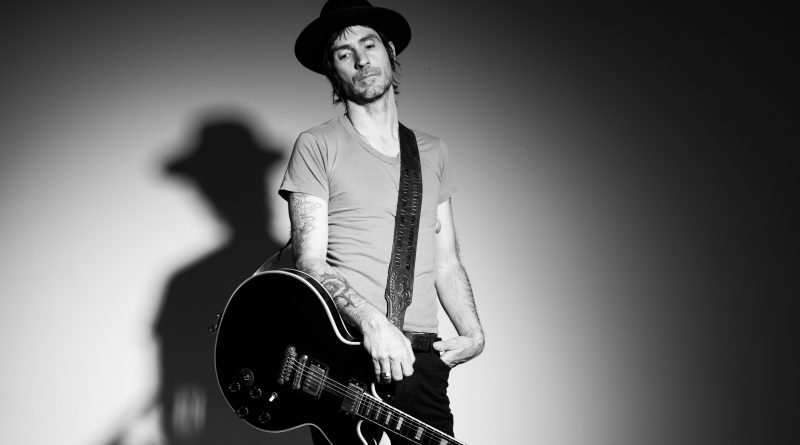 Picture a dim, dingy, hotel room. Cigarette smoke. A pistol under a leather jacket, a knife in a well-worn boot. Lipstick. Tattoos. Weary, wise eyes. A tinny old radio playing something gritty and evocative: bluesy roadhouse guitar, hard-driving rhythm section, biblical keys washing underneath like an urgent, muddy river. Someone here’s about to hit bottom, experience catharsis, or both.

That’s the shadowy, cinematic world a Walking Papers song creates, be it “Your Secret’s Safe With Me” or “Two Tickets” from the band’s eponymous 2013 debut record, or “Death On The Lips” or “I Know You’re Lying” from their new sophomore effort, WP2. It’s street-smart. It’s sexy. It’s dangerous. It’s the sound of a band that’s found its authentic signature, that’s thriving where others would sound cheap and hollow. It’s what you get when accomplished artists with wildly varying but equally dramatic life experiences form a band. It’s the sound of a true “supergroup”— multiple accomplished players who put zero stock in that label. These guys don’t care about fame. They get together to tell stories with rock.

Case in point: vocalist and guitarist Jefferson Angell, when talking with me in 2012 and again this month, focused on life experience, not previous success. Of his more household-name bandmates Duff McKagan (bass) and Barrett Martin (percussion) he said, “They put their pants on one leg at a time just like the rest of us. The only difference is they have each lived through a rock and roll shit-storm and come out the other side as gentlemen, with their senses of humor and humility intact.” That characterization aptly describes the lanky frontman himself. He sings the praises of keyboardist and fellow Missionary Position member Benjamin Anderson. He acknowledges past failures and the wisdom gained from them. He makes jokes and cites positives. He’s exceedingly intriguing—and kind.

Here Jeff explains how his own personal shit-storm informs his lyrics, how the band works around logistical challenges (like McKagan’s commitments to Guns N’ Roses), what they’re doing to remain accessible to fans, and where his songcraft might take him next. Beyond Walking Papers’ sold-out WP2 release show at The Crocodile on Saturday, that is. No question it’ll be someplace riveting.

NWMS: In 2012, you and Barrett talked about already having song structures for a second album. It sounded like you were aiming to release it in 2013, so…

JA: Wishful thinking! We had a solid batch of songs, but when more arrived, they were better. And then there were tour opportunities that kept piling on. So, I suppose we spoke too soon. We recorded [WP2] after our last tour with Aerosmith [in the] summer of 2014. Then life got in the way. Rather than sitting around waiting on other people, Ben and I made the Staticland record. We then supported that with a couple of tours in Europe and a couple in the States. When we fulfilled that contract, everyone agreed it was time to get the record into the ears and hearts of the fans, where it belonged. It’s definitely a better album because we waited.

NWMS: How did you all juggle your other projects to accommodate Walking Papers sessions?

JA: It was a lot like trying to keep kittens in a cardboard box. Everyone is off chasing a ball of yarn or licking their own fur. We all have dramatically different personalities with different interests, but when we get to work that diversity manifests into something that works for us. So, as in life, ya just do what ya can with the time ya got. Personally, I just try to do my homework so that when we’re together, if inspiration doesn’t show up I still have something to keep the ball rolling.

NWMS: You went with a different label for this record. Why jump from Barrett’s imprint?

JA: I hate sentences that start with “actually,” but… Actually, the first record was on Barrett’s label for the first 10,000 copies, and then Loud & Proud picked it up. We really enjoy them as people, so we’re tickled to be off on another adventure with them.

NWMS: “WP2” sounds like a sequel—and the self-titled debut was certainly cinematic. Were you guys thinking in those terms?

JA: I guess I like to think of it as one body of work, but not necessarily a sequel. I get lost in my imagination, and songs are me trying to find a way to translate what goes on in there to other people. I don’t know if you’ve ever done LSD, [but] when you do, your brain evaluates all these peripheral thoughts that it usually ignores. While you’re peaking, you feel like God is showing you the blueprints to the universe but when you try to explain what you’ve seen to others, you just can’t. Lyrically, these songs are as close as I can get to sharing the episodes that take place in my imagination.

NWMS: Both WP2 and the debut record are loaded with dark episodes and conflicted characters. What draws you to that feel, to knife-edge situations?

JA: I’ve had a life rich with experience. Some good and some bad. I wouldn’t trade it for anyone else’s. I feel that there is something looking over me that likes me and what I’ve done with my time here. I have faith that it knows what’s best for me and that’s what it delivers. I’ve tasted enough darkness to know not to wander too far into that shadow. I can still visit that place through the characters in the songs without sacrificing my dignity or letting down those who are looking after me. I know that sounds fucked up; that’s ’cause it is.

NWMS: I bet you have a book in you—maybe similar to Duff’s It’s So Easy. Are you exploring a new writing form with the “This Is How It Ends” comic? What’s that all about?

JA: If I have a book in me I’ll have to wait for some people to die before I can share it, because if I wrote it now, it would probably kill them! The song “This Is How It Ends” inspired the comic, but it’s Csaba Mester and Matt Hayward’s achievement.

NWMS: How did that and the band’s PledgeMusic association come about?

JA: Somewhere along the line, music stopped being an art and became an industry. People want experiences and they want to have a connection. I know I do. When I go on tour, I feel like I’m visiting my extended family. There are so many people I’ve met out there that I cherish and enjoy spending time with. With the PledgeMusic campaign, I can create art pieces and offer up handwritten lyrics. I put heart and soul into those, just like I would a song. Through that, I’m hoping we can make a deeper connection with our people beyond what the album already provides.

NWMS: When we talked in 2012, Barrett noted the “pretty limp” state of rock and roll. It hasn’t changed much since. Did that again inspire you to fill the void?

JA: Rock ’n Roll is all in the attitude of the motherfucker, and attitude is not something a sanitary, one-size-fits-all society knows what to do with. That’s what made Rock ’n Roll necessary in the first place. It’s gonna work itself out. It always does. When it arrives, it just might be hard to recognize, ’cause it ain’t gonna look like your grandpa’s Rock ’n Roll. If it was, it wouldn’t be Rock ’n Roll.

NWMS: “The Whole World’s Watching” (off the band’s debut record) touched on politics. Did the new, surreal administration and climate inform your writing for WP2?

JA: The record was made before Trump was elected, [but the] song “The Whole World’s Watching” was inspired by the Occupy Movement. The haves versus the have nots. Well, the haves own the media. And Trump is good television. He’s also a reflection of the worst of what America has to offer. It’s not who you vote for, it’s who counts the votes. And getting upset isn’t going to solve anything. People need to get organized! Shit, don’t get me started!

NWMS: Okay, subject change: What kind of unique, unexpected instrument or rhythm did Barrett bring in this time?

JA: I suggested he use the typewriter as a percussive instrument. It was cool, but we scrapped that song ’cause I couldn’t get the lyrics right. We recorded this album in Josh Homme’s Pink Duck Studio. While we were there, these tubular bells showed up that Josh had purchased from a high school or something. Barrett played them on a few songs before Josh got the chance [to use them]. The rest, as they say, is history!

NWMS: Does the band’s approach change when playing with/without your bassist?

JA: Duff had to leave in the middle of a tour, and Ben picked up the bass lines like he does in Staticland and the Missionary Position. He covered all the bass parts with his left hand and played organ with his right; it opens up some interesting opportunities sonically. He had two days to rehearse. His first show was in Basque Country, where we played after Gov’t Mule and Gas Light Anthem to 20,000 rowdy fans. Ben’s a badass, so naturally he killed it! Our attitude: turn the obstacle into an opportunity. All the pressure just added to the tension, which found its release on that crowd. It was one of my favorite shows we’ve ever done. That said, Duff is one of the best bass players on the planet. But time doesn’t wait for anybody.

NWMS: Will you guys tour beyond the Crocodile show?

JA: I’m rotating the crops. I’ve done a lot of music work. Seven records in the last 15 years, as well as a bunch of songs that have never been released. (I’ve got a good 10–15 that are looking for a good home.) Although I’m really proud of all the work, I don’t want to create a dust bowl. I have ideas and opportunities, but for this moment, I need to stop moving artistically and check in with myself.

Clint’s interest in the late-80s/early-90s “Seattle Sound” drew him to the city nearly two decades ago. He’s a copywriter by day and music writer by… whenever he can fit it in. He’s grateful to have melded his one true skill (writing) with one of his true passions (PNW music)—and in the process, met a lot of the artists he’s respected since high school.