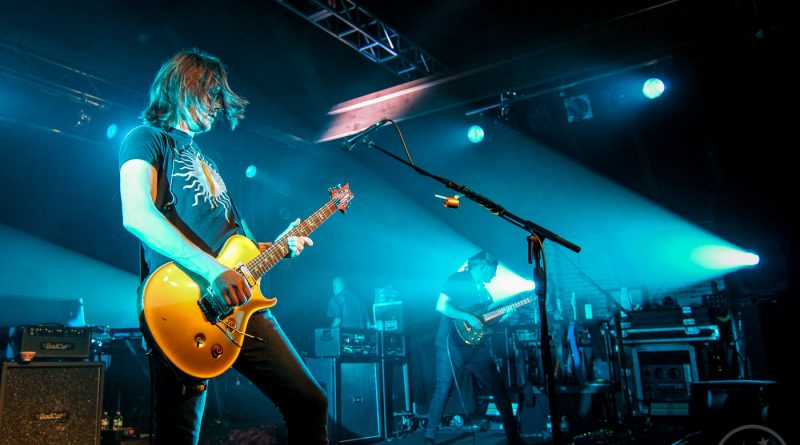 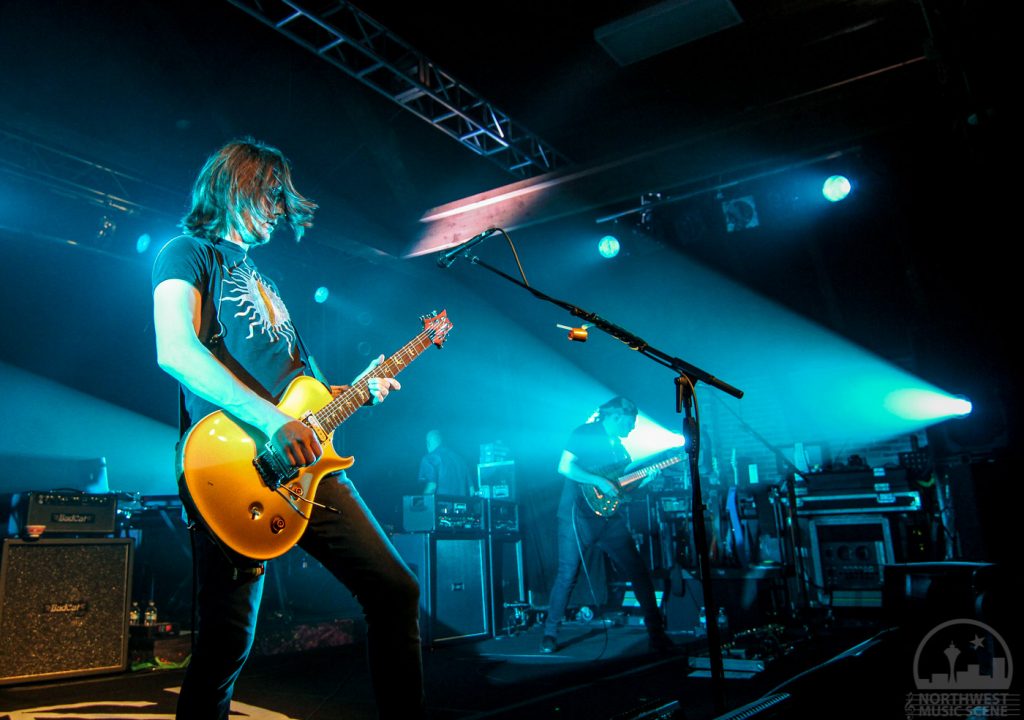 The last time the genre-bending genius that is Steven Wilson played in Seattle was the Moore Theater in 2015 and while the capacity the Moore and Showbox SoDo are similar, the layouts are drastically different. This current tour stop in Seattle in support of his latest album To The Bone would be held at Showbox SoDo and his show is more often than not seen, or I should say experienced, at sit-down theater settings, but the stand-up version of his live performance brought people closer and gave them a chance to move their bodies.

Opening the show was Ninet (Tayeb) and her talented band who have been on the road with Wilson and his own incredible band. Tayeb has plenty of history with Wilson in the studio and live so when this show was announced and her name was on it as the opener, it added a special element for the people that have been following Wilson and the work she has done with him. On Steven Wilson’s latest release, To The Bone, she is featured most notably on “Pariah” and while she would ultimately come out on stage to do that number with the headliner, her band had some business to do first. 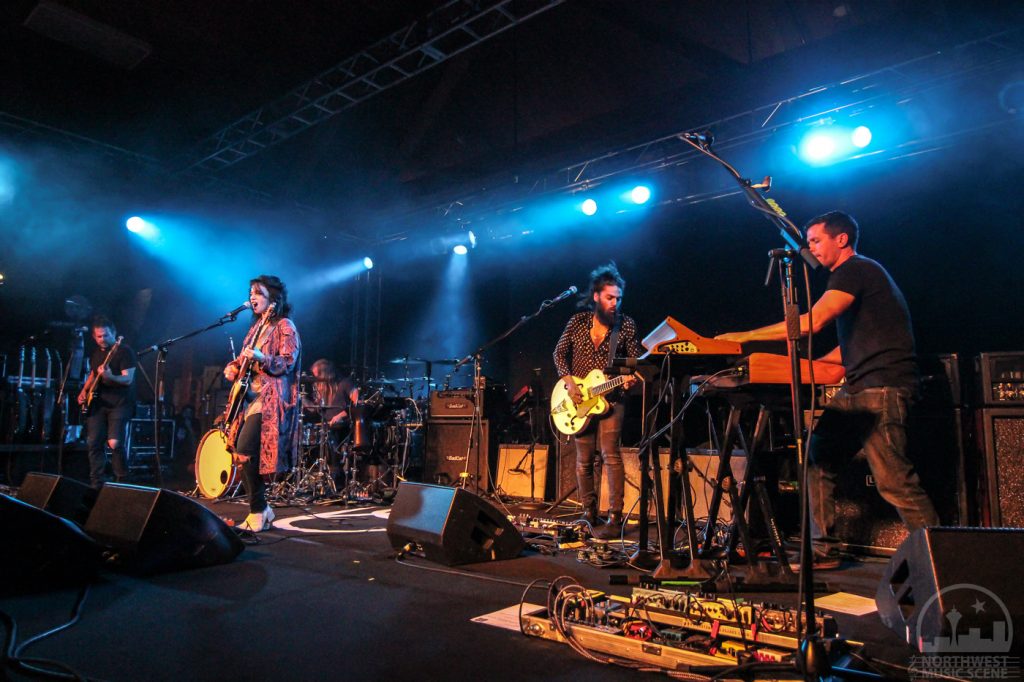 While Tayeb’s band is no doubt a rock and roll outfit, it’s not hard to pick up on the Eastern influences in the Israel native’s music. And while the band members are all great players, there’s little doubt that her voice, a powerful instrument of its own, is what powers that machine. She playfully bantered with the Seattle crowd about how much she loves the city and joked she might even move here. For most of her high-energy set she roamed the stage with cat-like prowess but at times took it down a notch, especially on “Sweet Euphoria,” which she dedicated to Chris Cornell. Judging by the reaction of the crowd near the front of the stage, they loved her.

After Ninet’s set concluded and promises made to return, a light blue translucent curtain was extended across the front of the stage while preparations were being made for the Wilson’s show. After a lengthy set change, the house lights went down and was time for the main event. The see-through fabric that concealed the stage allowed for glimpses of the silhouettes as the musicians began assembling and also doubled as a video screen displaying solitary words such as Love, Lie, Life….etc to get the concert-goers minds working. 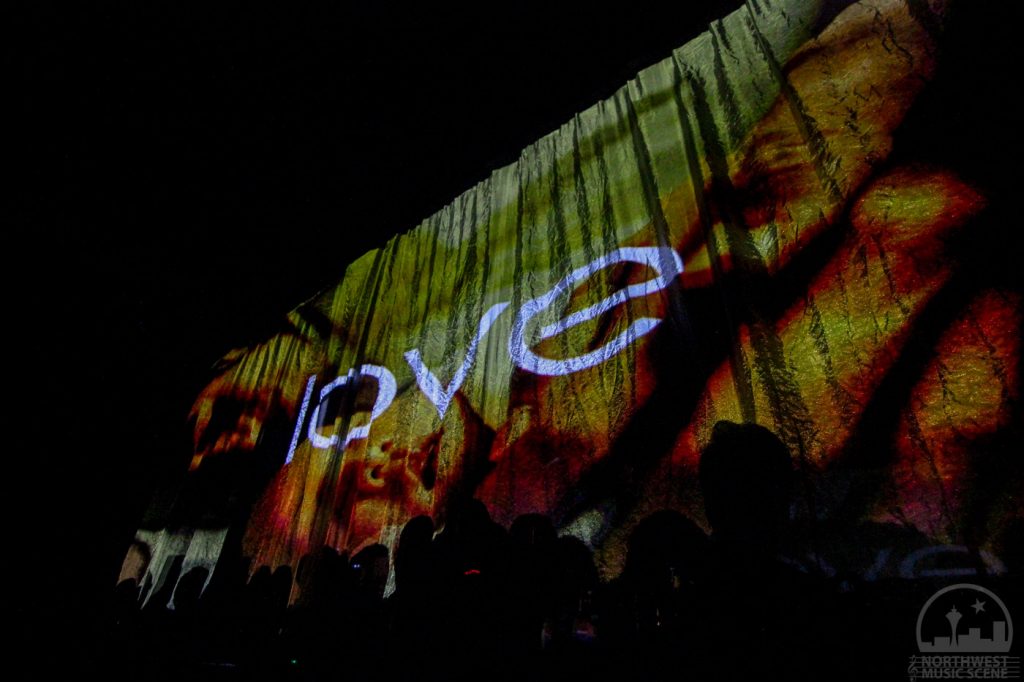 The first two songs of the night were played behind this front drop and while it’s not what I would call idea for us photographers, it created visually stimulating effect for the people in the crowd. The second song of the night was the aforementioned “Pariah” with Wilson calling Tayeb to the stage, resulting in a flawless performance that features a whole lot of Ninet’s incredible vocals. Their voices conjoined in beautiful harmony on the gorgeous song live, just as they do on the album.

With the curtain removed, Wilson introduced the next number, “Home Invasion” running in stark contrast to his previous duo with Ninet. Whenever someone that has never heard of Steven Wilson I point them to several songs to begin their journey with, one of which being this one off of the 2015 release, Hand. Cannot. Erase. With a haunting synth starting the blazing track off, they instantly found the groove and the tone was set. Wilson gets labeled a lot of things and while he certainly a firm grasp of the prog-rock genre when he wants it, this melody of this song seems to describe him and his band without words. One minute it’s prog, next it gives way to delicate vocals and dreamy guitars, before hitting you over the head with blistering rock or psychedelic jams. They then seamlessly went into “Regret #9” because the two songs have to be played (and listened to) together. 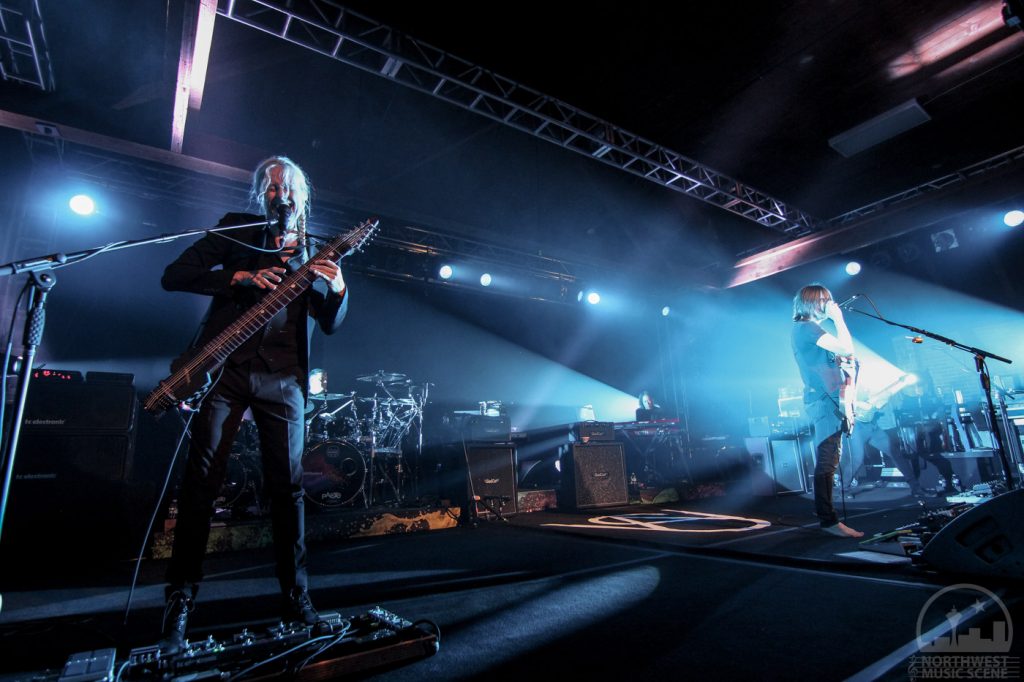 As the nearly three-hour set progressed, Wilson and his superior group demonstrated why even though if you walked the streets of Seattle all day long asking people if they knew who Steven Wilson was, you’d get nothing but blank stares, there were at least 1300 people in the Showbox SoDo. By the time the first intermission was upon the crowd at a little over an hour into the show, which seemed to come quickly, the attendees had already experienced one mind-blowing number after another. And for the people in the middle of the venue, the surround sound was dialed to absolute perfection and added another layer of awesome to the show.

After a fifteen minute break in the action and the “shower curtain” (as Wilson jokingly called it) was once again pulled across the front, the band returned to finish the job. 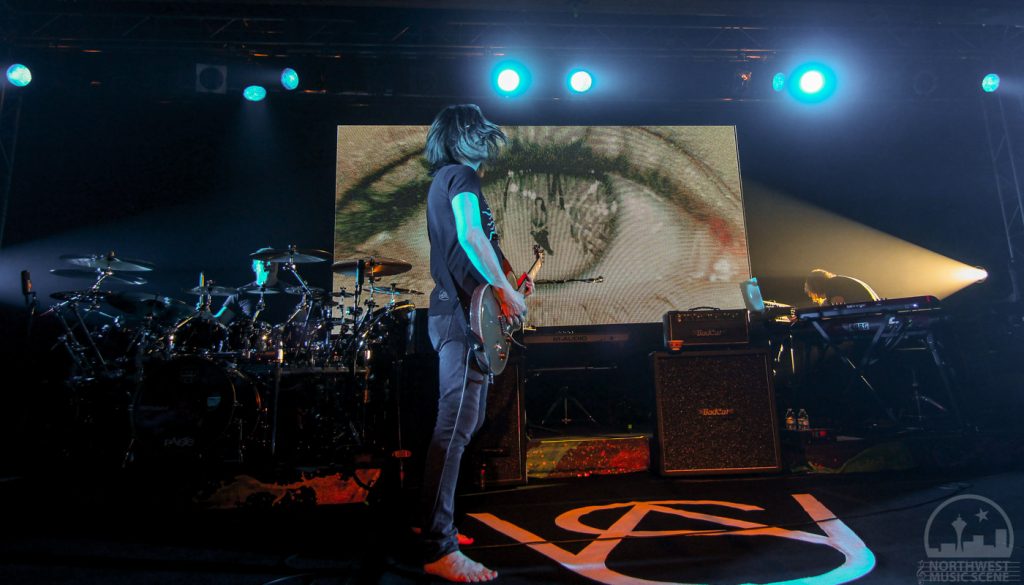 While you’d be hard-pressed to find a better band anywhere on the face of the earth and they deliver ferocious jams almost back to back all night long, a Steven Wilson concert is equally as visually stimulating. Wilson noted that they are normally in a theater type setting with a video screen the size of a small building behind the band, they made the most of the postage stamp screen (as he called it) and displayed brilliant, evocative content throughout the evening. The lighting was just as spectacular going from from pitch black to pin-wheeling kaleidoscopes from one side of the stage to the other.

Wilson engaged with the crowd several times during the two sets, explaining his love for Prince and why he thinks Prince was the greatest musician ever in the pop genre. At another point he asked for a show of hands for people under 21, which there were plenty. He let them know that what he was holding in his hands was a road-worn 1963 Fender Telecaster and jokingly stated that they used to be used in music a lot in the 20th century. That of course brought some laughter and soon after he proved he can play that guitar telling the crowd “this is as punky as I get.” 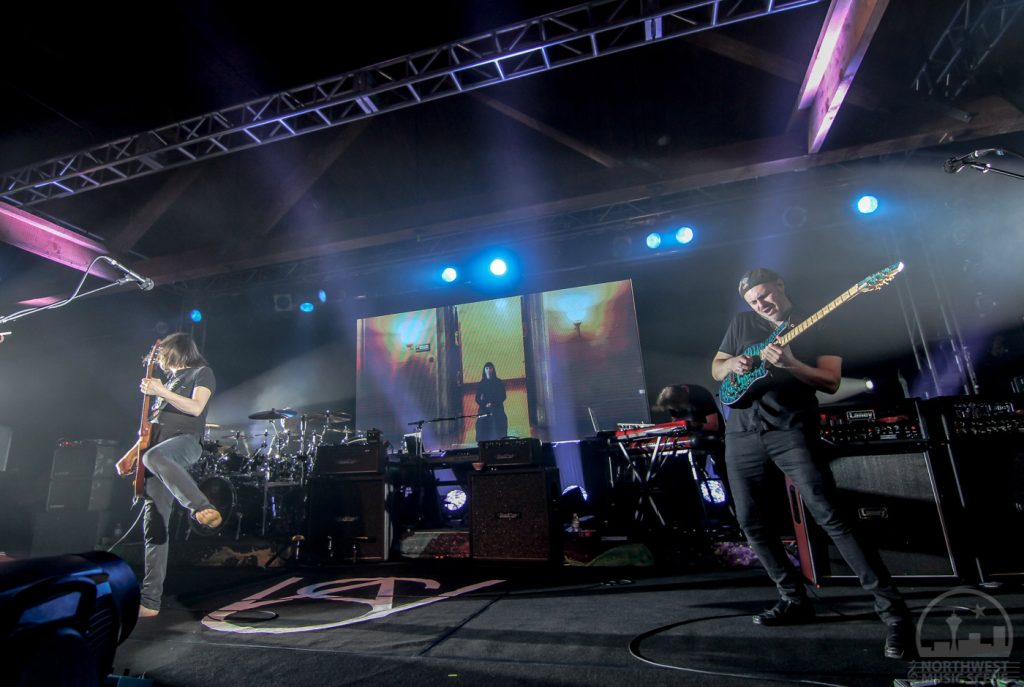 Nearly three hours after this world-class squad started playing, they somberly ended the night with “Song of Unborn” which once again found Wilson detailing exactly what the song is about. His message was clear, do something profound with your life, even as fucked up as the world can seem sometimes. As the last of the lyrics began to drift off, the final words “Don’t be afraid to be alive……..don’t be afraid” rang throughout the venue and he sent that message home as a memento to go along with the ticket stub.

Writing a review of a Steven Wilson show almost does it no justice without turning it into a 5,000 word essay but for the people that are fans of this amazing musician, they just know, they get it and they’ll be back again the next time he rolls through town.