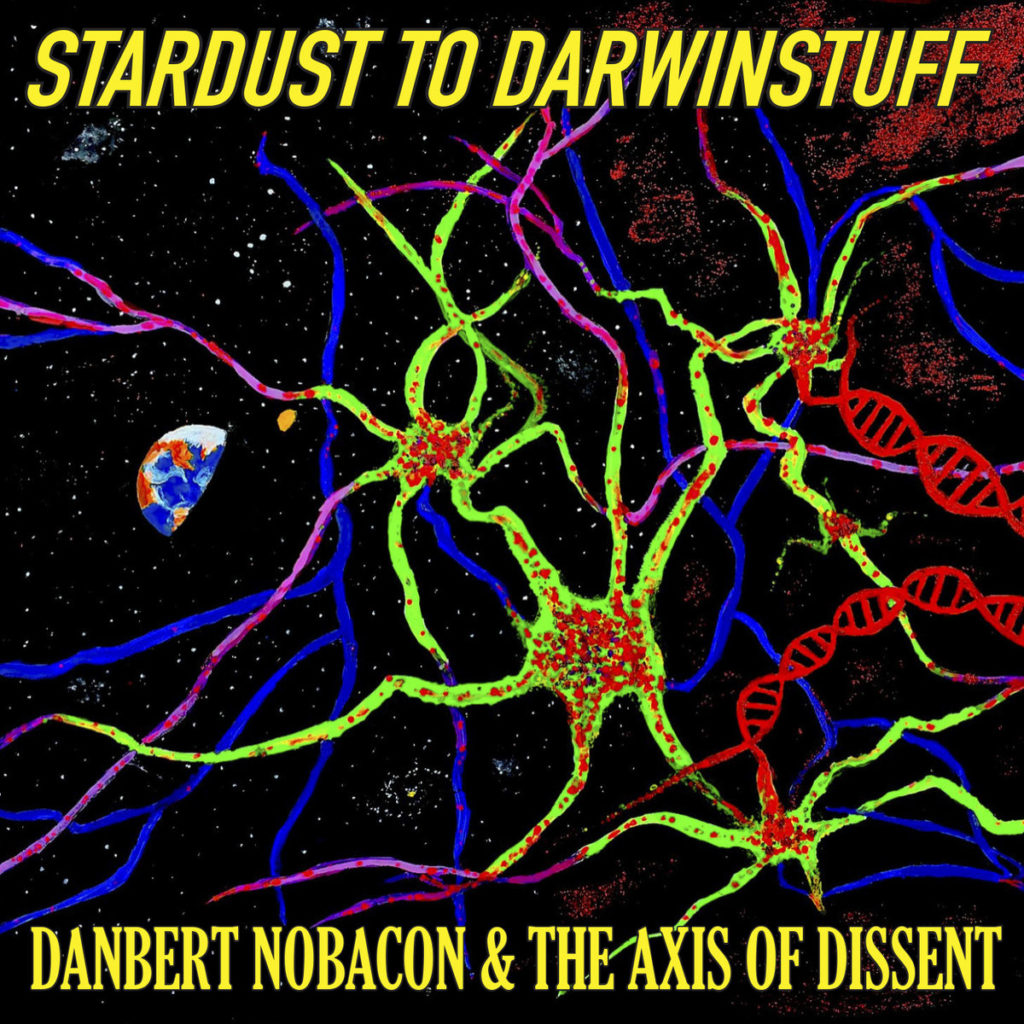 Danbert Nobacon was previously a member of Chumbawamba, Britain’s own anarchist rock band who had unexpected commercial success with their massive hit single “Tubthumping” in 1997. After his tenure with the band (which finally disbanded in 2012), he somehow ended up in living in Twisp, Washington, where he works as a high school teacher.

He continues making music as well, and it’s no surprise to find his latest album, Stardust to Darwinstuff, packs as much of a political punch as his former band. As well as serving up a stout defense of science (all too frequently dismissed these days as “biased” or “having an agenda”) — as in the title track, a rollicking country & western/folksy-themed number about evolution that marvels at how celestial dust eventually led to our very existence.

The music’s jolly throughout, with Nobacon generally playing acoustic guitar, and the “Axis” chiming in on bass, drums, keyboards, violin, trumpet, banjo, accordion, even the occasional electric guitar (Nobacon also handles the lead vocals, joined by other vocalists on some numbers). It’s high-spirited protest music. And perhaps all the more subversive because the toe-tapping melodies are wed to chilling lyrics, as when Nobacon blithely delivers the chorus of “Karma Won’t Save Us (From Rex Tillerson):

So I’m sorry, but karma won’t save us
Measured by every living thing that has to die
So the rich can keep on, getting on, getting richer every day
Till it all falls apart and worms inherit the earth

Well, during a crisis there’s no point in sugarcoating things, is there? The same can be said of “Revolution 9.01,” the album’s first single, written in response to the last US presidential election. “How did it come to this?” Nobacon asks. “Where do we go from here/when the oligarch knows better than all the world’s scientists,” later denouncing the new prez as someone who “couldn’t even get a job in a public high school.” Or consider “To Be or Not to Be,” an entreaty to end the madness by upending the social order: “Die, Capitalismos, die — and leave the oil in the ground.”

It’s not all gloom and doom. “East 20” does reference climate change (as a cause of the landslide disaster in Oso in 2014), but it’s mostly a number about Nobacon’s escaping the big city for the serenity of the countryside. You can imagine “Water Off a Baldy” as a children’s song, sung around the campfire. And there are a host of tunes about desire and its sometimes painful consequences: “So Hot it Hurts” celebrates the joys of mutual attraction (“The summer just got hotter/as you crossed my line of vision”), matched by the regret of self-explanatory tracks like “Worse in the Morning.”

But it’s the more topical songs that resonate the most here. There’s righteous anger, but also hope, as well as a welcome reminder that you’re not alone in the struggle. As “Revolution 9.01” puts it:

Updating Shelley, ‘We are many, they are few.’
And we will do whatever we have to do.
Because 3.7 billion-plus years of life on earth
Is something worth fighting for.

(You can listen to Stardust to Darwinstuff below, purchase it via Bandcamp and get more info about Danbert Nobacon at the website HERE.)