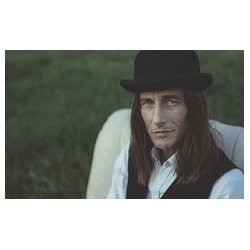 Georg Altziebler of the Austrian duo Son of the Velvet Rat will play a solo show at Conor Byrne Pub on October 13th. Additional shows will include Ashland, Cottage Grove, Salem, Portland, Eugene, and Tacoma. Tickets and additional information are available here.
Georg Altziebler is the songwriting half of Son of the Velvet Rat, a husband-wife duo (with Heike Binder) who left their home town of Graz, Austria and the cloistered safety of the Continent for the endless highway of America, finally settling in Joshua Tree in California’s Mojave Desert in 2013.  Situated at the vanguard of Euro-Americana, his songs build on the cabaret traditions of Old World masters like Georges Brassens, Jacques Brel and Fabrizio De Andre, now fused with the dark Old Testament prophecy and Kabbalistic visions conjured by Townes Van Zandt, Leonard Cohen and Bob Dylan.
The result, as realized on the group’s 2017 U.S. debut Dorado, is like some exotic desert fruit of indeterminate provenance — equal parts ragged glory and brooding noir, the crepuscular glow of the violet horizon and blood pooled on a motel bathroom floor  — all delivered in what accidental fan Lucinda Williams, who caught their set one night at the Hotel Café in Hollywood, calls his “great sexy-gravelly voice.”  As producer Joe Henry puts it in the liner notes: “We didn’t so much arrange the songs as set traps for them; and as such, the clear-eyed deer of our collective desire walked right up to our threshold and ate from our hands.
Son Of The Velvet Rat celebrate the glorious elusiveness and the sweet heartbreak of song by releasing a new live record, “The Late Show”, for their US label Fluff & Gravy/Mint400.

“The Late Show” is a souvenir from their extensive 2017 tour. The album was recorded at three venues, the Rhiz in Vienna/Austria, Scheune in Wredenhagen/ Germany and The Studio Venue in beautiful downtown Burbank/CA. The ambiance is passionate, sweat-soaked and electric. Highlights include an epic “Sweet Angela,” a brooding version of “Copper Hill,” the pulsing Psychedelia of “Surfer Joe” and the world-weary ache of “Franklin Avenue.”