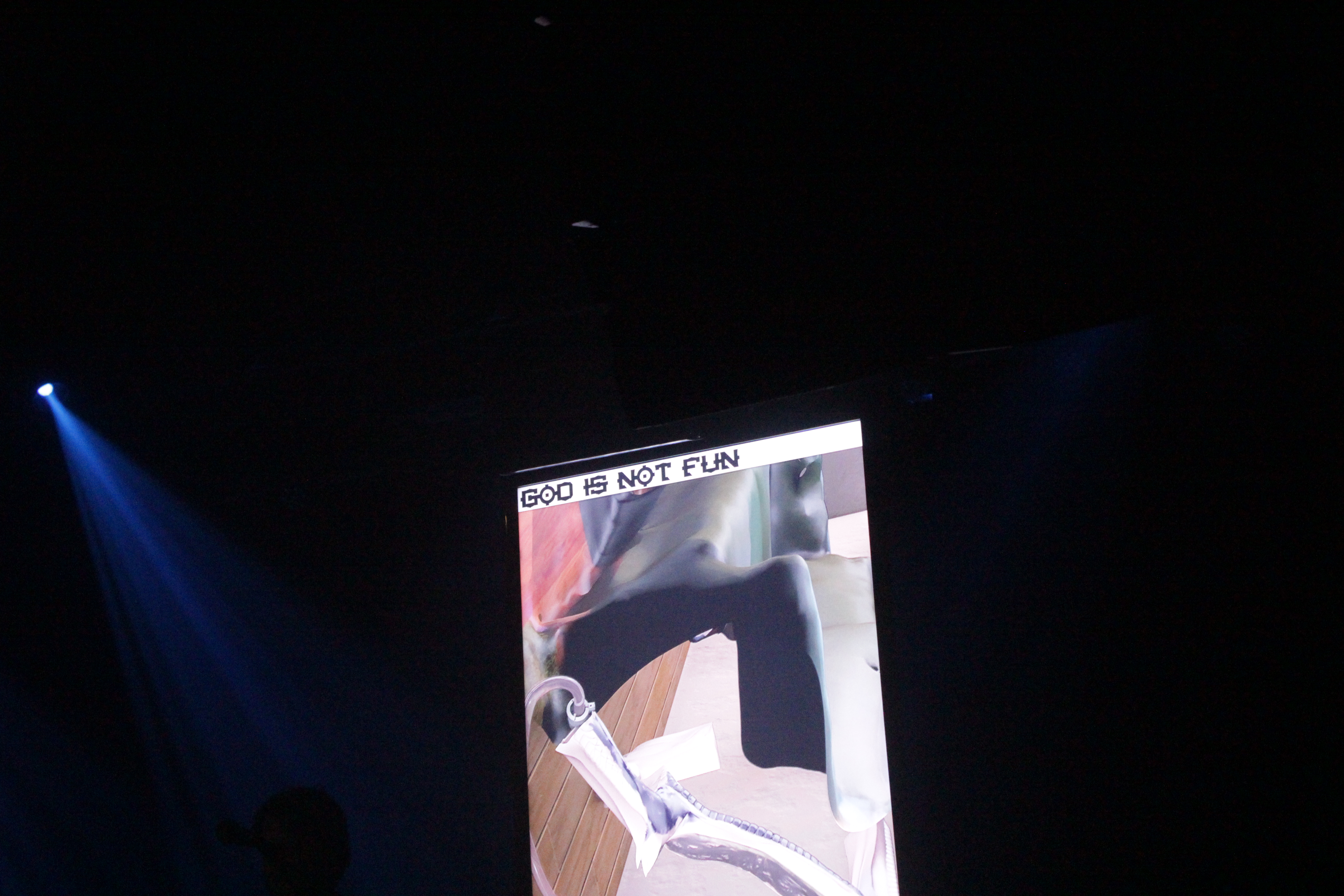 Daniel Lopatin, aka Oneohtrix Point Never, is a musician whose work is impossible to accurately describe. I tried explaining his music to my friend that I took to his show at Neumos on Tuesday night, and the best thing I could come up with was “nihilistic experimental ambient drone industrial sample-based cybergoth”. Oneohtrix Point Never is a project whose music is challenging, it’s mind-bending, and it was the sort of thing I’d imagined would translate perfectly into a bizarre, mind-expanding live performance, which was why my pants tightened at the announcement of him coming to Seattle.

Lopatin is touring in support of his phenomenal album Garden of Delete, and for a fitting opener, tapped fellow label-resistant producer James Ferraro to play a brief, filling half-hour set. I had pretty much no idea what to expect from his set, given that in the past James Ferraro has performed everything from kitschy lo-fi rock to proto-vaporwave to indescribable electronic music that sounds like the soundtrack to a bad, scary acid trip. A bit past 9:00, Ferraro slowly took to the dark, foggy stage, emblazoning a tilted cowboy hat, and wasted little time getting into his avant-garde all-improvisational performance.

Ferraro’s set was an interesting mix of factors. It started out with bizarre samples of synthesized voices having a conversation about iced lattes and other weird crap, before vivid samples of police sirens filled the room. After a decidedly weird intro, the set turned in an ambient drone direction, with consistent, albeit abstract beats only showing up for a portion of the set. The set tended to feel a bit aimless and meandering without any sort of clear direction, but I don’t think that was the point. Ferraro’s set was less a more conventional live performance with a clear beginning, middle and end than it was a journey through one abstract, vivid soundscape after another, and for that, it made for a great intro to the night.

A soft, inconspicuous drone between the two sets laid out a somewhat misleading tone for Oneohtrix Point Never’s set. At the crack of 10:00, Dan and his live guitarist filed onto the stage, and had a bit of a mid-paced intro, before immediately barreling into a hellishly loud display of sonic chaos. Endlessly flashing white lights lit up the whole venue as our hearing was slowly but surely being worn down to the foundation. No one in that establishment was ready for the hell that Lopatin unleashed on us, but we wouldn’t have wanted it any other way.

Even at its most abrasive and loud, Oneohtrix Point Never’s music has never struck me as being anything particularly aggressive, but in the live setting, what Dan brings to the table is so shrill and so overbearing that it just about bordered on being a power electronics set. All throughout the set, Dan laid his own loud, unintelligible vocals over the music with all sorts of crazy filters that made him sound like James Earl Jones by way of the dude from Unsane. This crazily-equalized vocal filter was swapped out at a couple intervals throughout the night in favor of an eerie, auto-tune-heavy vocal that sounded like the result of a Skinny Puppy/T-Pain collaboration.

Although Lopatin’s live presence maybe wasn’t as involved as some would hope, his crazy visual accompaniment more than made up for it. Aside from the eye-melting strobe lights, his set was supplemented by projection screens with some of the oddest visuals you’ll ever see in your life. Scrolling text with phrases like “God Is Not Fun” and “Brain Is Muscle Rot”, what looked like old, dated Geocities screencaps, graphically-distorting textures with crazy colors and flashes; pretty much everything you would expect from a Oneohtrix Point Never live show.

Daniel Lopatin is an inspiring musician. It’d be easy for any average music listener to look at the sort of stuff he does in the audiovisual realm and just write it off as being far-reaching up its own ass, but to me, especially live, Lopatin’s music brings with it just a strong sense of not caring about your expected standards of what music should sound like. He’ll punctuate a thick, distorted, but somewhat easy-on-the-ears drone with a loud, peaking high-pitched tone that caused at least half of the audience to plug their ears in an act of mercy.

10:55 marked a false stop to the set, in which Dan and co. blew kisses to the audience before heading off stage, before uproarious applause prompted Dan to return to the stage by himself for a sub-10-minute closer. In stark contrast to everything he’d been playing up until that point, his closing material was much softer, more tangible, and genuinely beautiful. I saw it, more than anything, as Daniel Lopatin’s aftercare. After pleasurably hurting the audience with his deafening, punishing music, he returned to the stage with sweeter, more pleasant music to show the crowd that he has his softer side, and that he still loves them. There was nothing quite like what Oneohtrix Point Never brought to Neumos on Tuesday night.