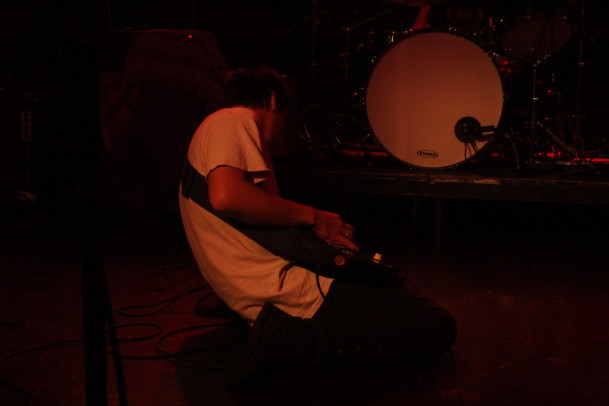 The music of California-based rock band FIDLAR is the perfect soundtrack to a high-energy, sweaty, cheap beer-addled party. While the group’s dirty, lo-fi garage punk-cum-surf rock style is far from distinct – the group follows in the footsteps of the Black Lips about as shamelessly as Patrick Star in that one episode of SpongeBob where he’s desperate to win an award – the group’s music is certainly entertaining for what it is, and it’s the sort of thing that translates beautifully into a raucous, nihilistic, loud-as-fuck punk rock show.

Touring in support of their sophomore full-length record, Too, which released just last month, the LA quartet took to the Showbox stage late Saturday night to turn a crowd of mostly antsy teenagers into a front-to-back mosh pit. With an awesomely weird visual accompaniment in the form of LED-lit faces and two life-sized dolls of R. Kelly on either side of the stage, FIDLAR came out, and had a slow-burning intro, which eventually lead into their barn-burner of an opener, “Stoked and Broke”. Right from the word go, the crowd became borderline destructive, with endless moshing, clothing accessories being tossed into the air, and the occasional shout-along to their trademark adolescent angst-driven lyrics.

Despite being such a young band with only two albums to their name, FIDLAR has the air of an experienced band with a firm grasp on just how to put on a badass live show. All throughout their performance, the members were moving all over the stage, interacting with the crowd, and at a couple instances, performing their instruments from the stage floor. Three of the four members rotate doing lead vocals between songs, which is a dynamic that works splendidly live, and brought the live show a lot of variety. In the live setting, FIDLAR brings a lot of raw, loose energy, and it’s clear they don’t take themselves too seriously.

The band brought along Queensland-based rock band Dune Rats for the ride, who managed to woo the ever-excited Showbox crowd with a similarly punchy, simplistic punk sound before FIDLAR came out to work their homely, stubble-faced magic. Being expected to warm the crowd up before a band as wild as FIDLAR is no easy task, but Dune Rats were up to the challenge. The riffs were loud and crunchy, the drumming, while simple, was bone-rattling, and the shouted vocal delivery of Danny Beausa further put their music over the top. Their brief garage rock cover of “Blister in the Sun” was met with a warm reception from the crowd, who was more than willing to insert their own claps during the isolated snare sections. They were a fun time.

FIDLAR’s set was a nice mixture of material from both of their albums, and the crowd’s reaction to these two albums was a study in contrast. The more mindless, dumb-fun first album cuts created a venue-wide mosh pit, with songs like “Cheap Beer” and “No Waves”, while the more angsty, emotional tracks off of Too, like “Leave Me Alone” and “40oz. On Repeat”, yielded more of a polite head-nodding experience as they calmed down and let lyrics like “Everybody’s got somebody, everybody but me…” hit them closer to home than they would’ve liked.

“Cocaine” closed the quartet’s set out, and marked the end of a pretty stellar hour of live energy. FIDLAR is the sort of band more cynical listeners like to write off as “juvenile” and “shallow”, and while those two descriptors are definitely true of their music, it gives their material a certain relatable charm to a lot of listeners, and it isn’t difficult to see so many pleased adolescents in attendance having the time of their lives. Friday night at the Showbox was a night of dumb, mindless, joyous, youthful fun. Here’s to never growing up.

FIDLAR performing at The Showbox on Friday night, October 23rd, 2015.