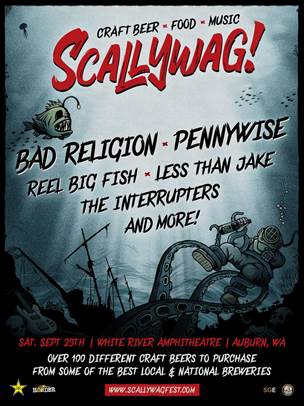 Synergy Global Entertainment (SGE) and Brew Ha Ha Productions are pleased to announce the expansion of the acclaimed Scallywag! Craft Beer, Food & Music Festival to include additional dates in Denver, Austin, Auburn, and Boise during September of 2018. The festival will also return to Waterfront Park in San Diego, CA on Saturday, October 20 for the third year of 91X Presents Scallywag! Each date will feature a music lineup of top punk rock and ska artists, with bands including Rancid, Bad Religion, Pennywise, The Mighty Mighty Bosstones, Hepcat, Less Than Jake, Reel Big Fish, The Interrupters, Mad Caddies, and more performing on select dates. Note: Lineup varies by market.

Scallywag! co-producer Cameron Collins of Brew Ha Ha Productions said, “Back for its 3rd installment, Scallywag! is going to be bigger than ever with an incredible lineup of breweries and epic bands! Rancid, Bad Religion, Pennywise and friends will pair perfectly with the brewery lineups we’ve got in store for 2018!”