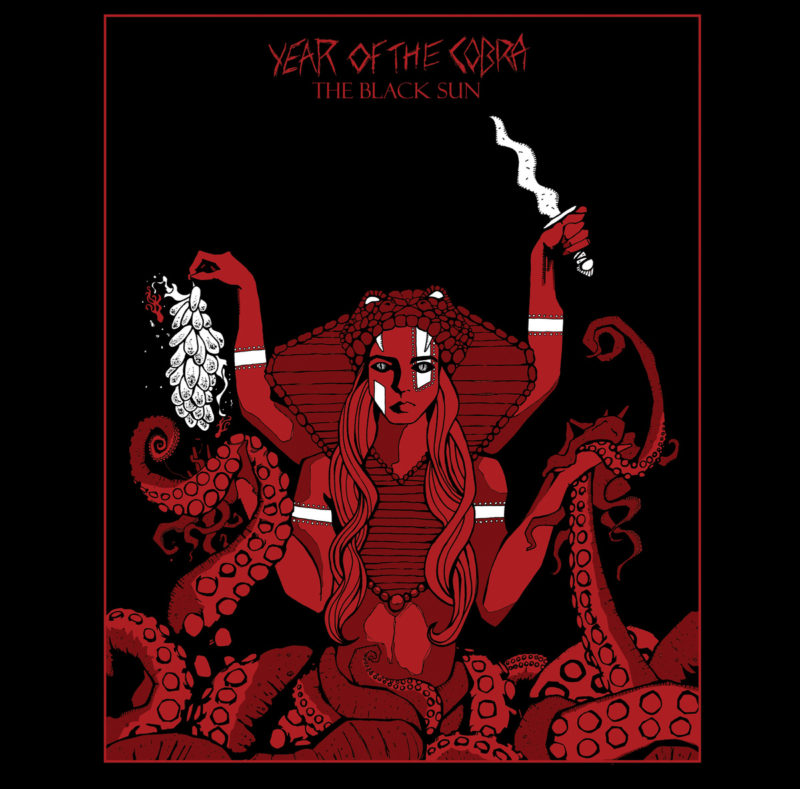 Dynamic duo Amy and Jon Barrysmith make up the doom-y twosome that is Year of the Cobra, a Seattle-based sludge metal band. Last week Amy and Jon dropped their first-born  – at least, that’s what they’ve affectionately called their first recording, The Black Sun EP – which they released to the public on January 15th.

The limited run of red-and-black splattered 10” vinyl created by DHU Records, available through label Devil Child Records’ website, sold out on the same day. Consumers also made a dent in the limited run red 10” vinyl. The remaining few vinyl copies are available in-person at the record release show this Saturday, January 23rd at Substation in Seattle. The bill also boasts Curse of the North and Witch Ripper.

It’s not hard to see why the records sold so quickly. Moaning vocals accent what reeks of Black Sabbath coming back through a long, dark tunnel. The rippling hums of Amy’s ever-expanding bassy tones are complimented by the dynamics in Jon’s drumming, shifting effortless from laid back grooves to pushing, driving climaxes. Amy’s easy voice over Jon’s steady splashing in the opening track “White Wizard” lulls you in, only hit you with the surprise left-hook of the brutal, tom-infused intro of EP-namesake “The Black Sun.” The Black Sun eases you back down with its final track “Wasteland,” a creamy finisher with a satisfying final push that perfectly ends this wallop of a record. You feel you get much more than 3 songs worth of enjoyment out of the short EP, which packs a punch, rattles your teeth, and refuses to quit.

(The Black Sun EP is available for purchase on 10” vinyl and for digital download on their Bandcamp site.)