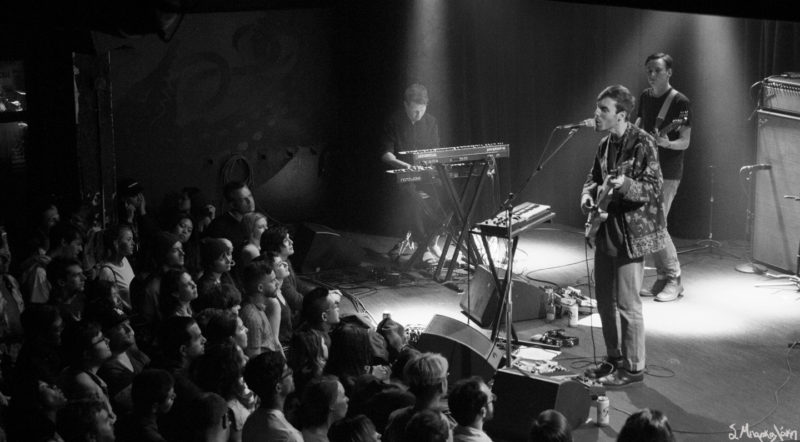 After the much-anticipated release of their third album, Life of Pause, Captured Tracks mainstay Wild Nothing made their way back to the touring circuit, and luckily that meant a trip back to Seattle. Even though it was a Monday night of all nights, the Crocodile was totally sold out, and desperate people were trying to find tickets outside to watch the show. The night started with the post-Smith Westerns project Whitney opening, who were really cool to check out. I liked the fact that most of the singing was done by the drummer that was in the middle-front of the stage with the band around him.

Jack Tatum and his touring band took the stage shortly after 10, opening with “To Know You,” “A Woman’s Wisdom,” and the older track “Nocturne” (off their 2012 record of the same name), all of which the crowd was enthusiastic to hear. Though Tatum writes and records all of Wild Nothing’s music alone, he is joined by a four-piece accompanying band when he tours.

The indie/dream pop sound came alive in the space as we all swayed back and forth through each song. The new release follows the same tone Gemini and Nocturne set, leaving you with a feeling that sunset is almost near. He played “Live in Dreams,” “Summer Holiday,” “Adore,” among others, ending his main set with hit “Paradise.”

The band came back on stage for their encore, which included “Reichpop,” and my favorite track “Shadow,” which was a pretty major crowd-pleaser. Whether you’re taking a road trip or sitting in your office looking out the window, listening to these tracks brings joy and a hint of nostalgia that you’ll appreciate.