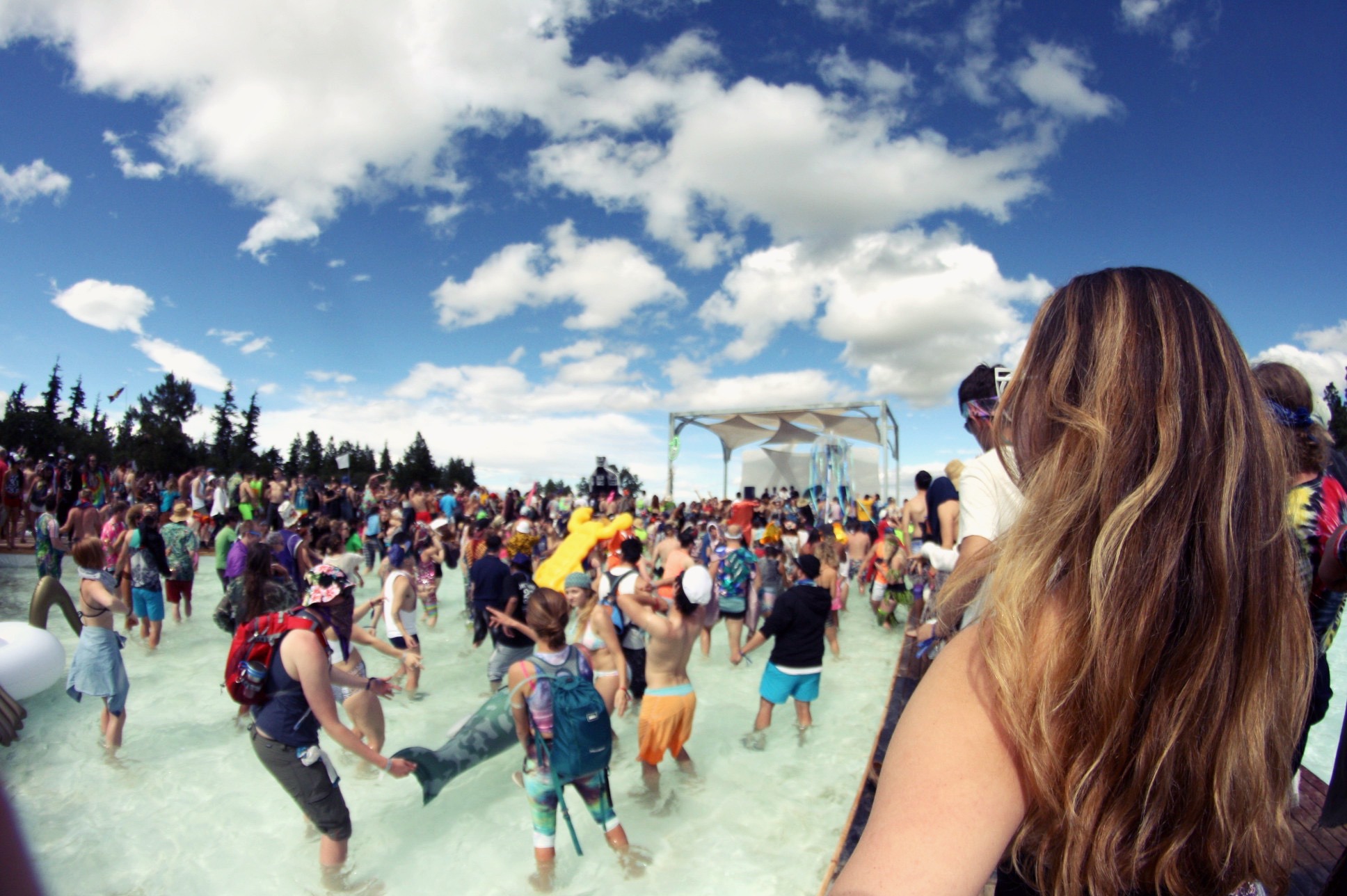 What the Festival proved yet again to be one of the most fun and unique festivals that I’ve attended in the Pacific Northwest. For those unfamiliar, What the Festival is an electronic music and arts festival in Dufur, Oregon, near The Dalles. It is a three-day festival that takes place the weekend of the Summer Solstice and focuses on coming together as a community to enjoy music, art, and movement. Along with the music and art installations, there are a plethora of group classes and activities including yoga, hula hooping, meditation, belly dancing, stretching, poi, and inspirational talks.

The festival sold out earlier than ever, and seemed to be better organized and coordinated. This year, they added another stage for a total of eight stages of music and entertainment. The newest stage, called the Groove Cube, ended up being the stage I found myself at the most. The stage was literally a cube of huge light-up boxes that surrounded you as you danced – I’ve never seen anything like it. They also added another wading pool to the pool stage to help provide a bigger splash zone for the festival attendees. The Illuminated Forest full of art and interactive installations did not disappoint. They kept some of the big pieces from previous years and included many new pieces.

The festival officially begins Friday, but I highly suggest buying an early entry pass so you can arrive and set up camp before all the good spots are taken and get down to the early artists that perform that night.

I arrived around 4 or 5 in the afternoon with my friends to set up camp. The walk-in camping is set up in the forest so you have the luxury of the shade of the trees and spaces to put up your hammock. However, the vibes from last year had changed as we found that setting up camp had become more territorial and possessive. People had literally roped off their land to save room for their friends who weren’t there yet. I completely understand wanting to camp with your friends and saving a little bit of room for them, but these were some massive plots of land they were reserving for their friends arriving later in the weekend. It was hard enough to find a spot for our group of friends who had all coordinated and arrived together. The people were rudely possessive of their reserved areas and very unwelcoming. I think next year they should try to nix the roped-off reservations.

This year, they had artists like Paranome, Buku, Mr. Wu, and Break Science to kick off the early entry party. I had never heard of Paranome, but went to the Groove Cube to check out the new stage and was pleasantly surprised by the local Oregonian’s ability to move the crowd. His mixes are all available on his SoundCloud, I highly suggest checking him out.

Mr. Wu followed at the Groove Cube, but I couldn’t pass up an opportunity to see Buku, who was playing at the same time on the Equinox stage. Buku absolutely killed it, and brought a great energy to the crowd with his bass music. His set made me excited for G Jones later on in the weekend, who has a similar sound and even has collaborated with Buku for some songs.

Jai Wolf kicked off my Friday at the pool stage. Many are familiar with his most popular track “Indian Summer” and his remixes, which brought the crowd to life and fit perfectly at the pool stage. About 15 minutes into his set, it began to rain heavily until about 11 the next morning. However, the rain didn’t stop anyone from getting down just as hard. It did, however, prevent me from taking any pictures the rest of the day since I didn’t want to risk ruining my camera in the pouring rain, a problem I’m sure many other photographers there unfortunately suffered as well.

The rest of the afternoon was spent drying and warming up at camp until the night shows. Penthouse Penthouse kicked off the evening with their smooth dancey tunes. Their set was extended since Djemba Djemba, who was supposed to follow, did not show up. Rumor has it that he was sick and couldn’t attend, but I don’t have that confirmed. I was really looking forward to seeing Djemba Djemba since I’ve never seen him before, so that was an unfortunate let down. However, they did extend Mr. Carmack’s set as well to cover the time, which I couldn’t complain about. I’ve listened to Carmack for a couple years, but haven’t heard the best reviews of him mixing live, but wasn’t disappointed with his show. For those of you who have never have never listened to Mr. Carmack, I highly suggest checking him out. He has a unique, glitchy, and funky sound that is near impossible to not dance along with.

Later in the night, I wandered around the different stages and discovered Soohan at the Groove Cube. Soohan is a producer out of Baltimore, who categorizes his music on his Facebook page as “Sample Based Alien 808,” which basically was an exotic, quick, funky sound with nice, solid bass in the background. It was a fun show, I recommend checking him out as well.

Louis The Child kicked off my second day and gave a great energy to the pool stage. The two are a duo from Chicago who work great together on stage, and you can really tell that they’re having fun up there, which I think is important. They were perfect for the pool stage, providing a very happy and positive sound, sounding like a mix of Odesza, Flume, Wave Racer, and Mr. Carmack, all bundled into one happy mix. Add these guys to your summer playlist.

This brings us to the unfortunate set of Hippie Sabotage that followed Louis The Child. I have never been a huge fan of Hippie Sabotage, and lost any bit of respect I had for them after their set, or lack of a set, I should say. From the beginning, one of the brothers was either very intoxicated or is just very obnoxious in general (hard to tell), but began yelling loud obscenities at the crowd while the other brother tried to mix. This wasn’t the type of yelling that hypes up the crowd, this was the type of yelling where the crowd wonders “What’s wrong with that guy?” and “What he is on?” The set sounded fairly generic musically until the two stood up on the table on stage and began yelling and dancing.

Security came along and asked them to get down, which they refused to do. Security continued trying to get them down, until Hippie Sabotage began jumping off the table and pushing the security guards until the stage became an all out brawl. One of them had a security guard in a headlock trying to suffocate him to death and the others were swinging punches until security finally got them calmed down and off stage. It was a horrible scene and was undoubtedly the most unprofessional thing I’ve ever seen at a show. They were not allowed to continue their set afterward and the pool stage ended early that day. You won’t ever catch me at another Hippie Sabotage show after that. There are several videos online of this fight if you’re curious.

Hermitude played at the Effin’ stage that night and was one of the shows I was most excited to see. Since the two are from Sydney, Australia and don’t tour the states often, I’ve never had the chance to catch them live. Their set included only original songs that they produced, songs they had remixed, or remixes of their original songs, which was cool and unique. The crowd went wild for their originals, especially the big ones like “HyperParadise,” “Ukiyo,” and “The Buzz.” The show was a blast, but they stopped to talk in the mic a little more than I would have liked. (Similar to a Diplo show; great producers dropping sick music, but stopping to talk way too much.)

G Jones was another noteworthy show of the night, playing a great bass-heavy set similar to Buku’s. He mostly played originals, including a new song he had just made with EPROM, who performed at WTF last year, and Ekali, who was at WTF this year, playing a few hours before him. It was a smaller crowd that attended his set, but he had everyone there dancing along.

Sunday afternoon was spent trying to relax a bit more as the energy was running low from the long weekend. We started at the pool, but moved back to the grass trying to re-coup for the night, so the music was mostly just background noise. Darius, Le Youth, and Motez performed while we were at the pool stage, and the crowd seemed to be having a great time.

The rest of the afternoon was spent re-energizing in the festival’s hammock and enjoying a quick hookah session in the forest hookah lounge until the main events of the night for me: Bonobo and Josh Pan.

Bonobo was on the main stage, also known as the WTF stage. I had never seen Bonobo live, so I was excited, but quickly found the set to be a little more repetitive and house-like than I would have liked. It was almost two hours of just a DJ set. Unfortunately, it wasn’t the exotic and melodic sounds of his original music that I was hoping for. A little disappointing, but still a fairly fun show.

Josh Pan, however, was probably the most fun show of the weekend for me. He was in the Groove Cube, and brought such a crazy energy to the crowd. There have always been rumors lingering about who Josh Pan actually is, thought to be a collective group of contributing artists, but now has been clarified as just one person. With a mysterious beginning, Josh Pan has quickly rose to high ranks in the electronic music world and is now very well-known. I’m glad I saw the entirety of his set, and I’ll be sure to attend any future opportunities to see him play.

Overall, the weekend was very successful and a great time. The staff had stepped up the organization and the whole weekend flowed smoothly. If you like electronic music, community, and art, be sure to check out this festival next year.

Anna Kerr has always been into a wide variety of music and loves going to concerts and festivals. She is currently studying photography at WWU in Bellingham, but grew up in Spokane. She hopes to pursue a photojournalism career, covering stories on things that bring people to life, and things that she believes needs to seen.