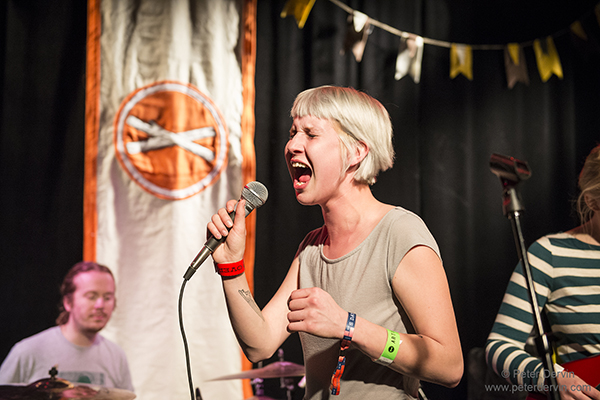 As the spring season begins, the Treefort Music Fest brings in thousands of people to the streets of downtown Boise. In its fifth year of existence, Treefort has become a destination for many in the Pacific Northwest to start the seasonal music festival journey.

What has been exciting is seeing how much this one time small local festival has grown to be one of the must-see events in the country. When Treefort started in 2012, it was a means for northwest bands and musicians returning from the SXSW festival in Austin, Texas to have an in-between before they headed back to Portland, Seattle and Vancouver.

The Day 1 festivities began on Wednesday evening with a secret show at one of the best independent record stores in the country, The Record Exchange, with the band Your Friend from Lawrence, Kansas, followed by Alex G from Philadelphia, Pennsylvania in a presentation for Domino Records. Both bands presented a nice variety of indie rock. Another annual treat at Treefort is the history of Boise Rock where I caught Lovey, Low-Fi and Deep Down Trauma Hounds.

To my surprise, Fretless Guitarist Ned Evett played with DDTH and it seemed like all of Boise was there to watch him shred. I also caught Ealdor Bealu from Boise, Great Grandpa from Seattle, The Western Mystics also from Boise, WEEED from Bainbridge Island, and Jackson Boone & the Ocean Ghosts from Portland.  To here and see so much exciting music coming out of the northwest is inspiring.

Day 2 again started with a surprise gig at The Record Exchange, this time with WEEED. Their sound features two drummers, guitar and bass, creating a metal sonic boom. I loved every bit of it; they most certainly are on my radar for the future. One of the reasons that Treefort is so unique is that the festival is spread out with over 25 venues featuring music and other forts. There’s a Kidfort, Foodfort, Alefort, Hackfort, Skatefort, Yogafort, Filmfort and Storyfort. There is so much going on that it is so hard to catch everything. I found myself missing something I may have seen and finding something completely new.

Edmund Wayne from Seattle played the Linen Building, another band to keep an eye on. I ventured on to catch Boise’s Glenn Mantang & the Guardians of Virginity at The Shredder, which is exactly what they did. I then headed off to The District and caught a bit of Jesii Dee, who played a nice acoustic set. Following that, I was off to the Rose Room to see and hear First Chair, featuring Lanae Alvis on vocals and keyboards and Rase Littlefield on drums. It was an interesting combo of just keyboards and drums, putting a nice spin on indie rock. It was kind of nice not having a guitar blasting you all the time. With that being said, Rase is a powerhouse drummer that truly was amazing to watch.

The band LEX followed with a very cool set of synthpop featuring four women from Los Angeles. They had the crowd dancing to their electronic sounds and harmonies. I then headed off to the legendary El Korah Shrine for Hinds from Madrid, Spain, another band featuring all women, and they had the venue packed. Closing out my evening was a trip to the Linen Building again, to catch Plum, originally from Denver, but recently relocated to Los Angeles. These guys were great, reminding me so much of a new Southern California country rock sound. Also from L.A. were The Mynabirds, featuring Laura Burhenn, who brought a lovely style of pop rock to wrap up my Day 2.

Day 3 saw the Main Stage opening for the festival with Stonefield from Victoria, Australia with a hard rocking set. It’s just so cool to see that there are so many women-driven bands that are making an impact, and this day I was seeing some of the best. La Luz, formally of Seattle and recently relocated to Los Angeles, brought their surf guitar-driven songs to the cool afternoon. These women have gained more and more critical attention and just seem to be getting better and better within this genre.

Boise legends Built to Spill put on a great set of classic tunes and some hard rockin’ riffs. They have been the one band that has played their hometown festival every year, usually playing several sets over the weekend, and they did not disappoint. But what followed them this evening would be the headliner for the entire festival, Charles Bradley & His Extraordinaires from Brooklyn, New York.

Now I have to admit, I have become a Charles Bradley fan, and was super excited to see him here at Treefort. The first time I saw Charles Bradley was a couple years ago at Bumbershoot and then at the Timber! Outdoor Music Festival, and finally last summer at the Hardly Strictly Bluegrass Festival. Each time he continues to amaze me with his emotion and the power in his performance. He has a new album coming out in April, which is highly anticipated by me and countless other music fans.

What Charles Bradley is able to do in his performance is to move so many people emotionally. As Bradley sang, I witnessed both men and women crying joyful tears as he entertained the Treefort disciples. Not to mention his band The Extraordinaires are as tight as any band you’ll see in the U.S.A.

After such a wonderful moment, you think that can be topped?  I headed over to Hannah’s to catch MASZER and Thunderpussy who just played in Seattle for two sold out shows. I had not seen or heard Maszer so when they set up with two drummers, I knew that something was going to happen. With a nice mix of rock and Middle Eastern sounds which created a frenzied dance party. Then the women of Thunderpussy took the stage and completely rocked the place. Coming off two sold out shows at the Sunset in Ballard, these four are just getting better and better.

Day 4 began with Jeff Crosby & the Refugees, a band that really surprised me. Going in, I thought they’d be a rootsy Americana band but the more I listened and watched, there was an element of the Allman Brothers Band and Marshall Tucker Band. I really enjoyed their set, and they will be one the bands I now follow. Another new artist followed, Esmé Patterson from Portland. Her pop-rock songs were very insightful, especially when she played tunes from her recent album, Woman to Woman, which was explained as a concept album focused on responding to other songs about/by women. New Madrid from Athens, Georgia followed with a strong set of indie rock, with some solid songs which energized the crowd for the rest of the afternoon.

It was at this stage of the afternoon that I walked over to the Boise Contemporary Theater to listen to a variety of musicians that would be performing a mix of ambient music and soundscapes. First up was Deear, a solo artist with her violin, creating a beautiful instrumental piece. The next band was one of my favorites from the previous year, Darling Rollercoaster, and they asked me to come and check out their performance. It was epic! An expansive soundscape that started slow and continued to build for a solid hour, the textural sound was so moving and exhilarating. Following was C.J. Boyd, who is an artist that’s been on a non-stop tour since 2008, creating a mix of sound loops with his bass guitar, his voice and some whistling for countless people around the world. Again, after 3 hours of ambient bliss, it was truly a spectacular experience.

I then headed back to the Linen Building for Fog Father from Portland, who offered up a nice selection of soul-tinged pop music. They put on a colorful and entertaining set. Next up was SISTERS, who have been becoming one of the fastest rising bands in Seattle. Andrew Vait and Emily Westman are creating pop rock music with some great lyrics and instrumentation. This band continues to evolve into a joyous romp.

My evening closed out at the Mani Stage to catch YACHT. I had never really heard their music before, so I wasn’t sure what to expect, but man, were they entertaining. Lead by frontwoman Claire Evans, YACHT presented a set of indie pop-rock dance tunes that had the crowd moving and shakin’. Though my biggest surprise came when they covered “Space Girl Blues,” a very rare DEVO gem.

After four straight days of the Treefort Music Fest, I was joyfully exhausted. I took a break on Day 5 and hit the road. Once again, Treefort exceeded my expectations with a broad variety of music, art, food and activities. It is one of those festivals that I look forward to every year. Rock on Treefort!!!