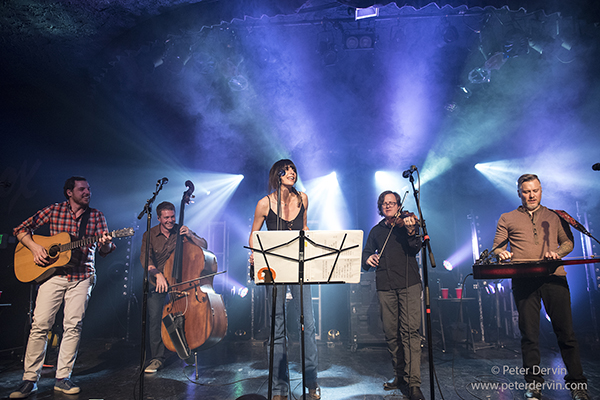 Over the past ten years, there has been an abundance of young musicians tapping into the heritage of bluegrass music. The Avett Brothers have led the way, along with bands like Trampled By Turtles, Old Crow Medicine Show and the Yonder Mountain String Band.

When I started seeing some of the reviews coming in for the Infamous Stringdusters, and then noticed that they would be in Seattle at the Showbox, I had to go check them out. Opening for the Stringdusters was another band I had heard lots of good things about, Della Mae.

Della Mae is a band playing traditional yet new-feeling bluegrass music, which was amazing. With Celia Woodsmith singing lead vocals and guitar, Jenni Lyn Gardner on mandolin and vocals, Kimber Ludiker on fiddle, Courtney Hartman on lead guitar and vocals, and Zoe Guigueno on bass, these women punched out feisty and catchy bluegrass riffs and pickin’. The next day I went out and purchased their self-titled LP, which was as good as there live performance.

The Infamous Stringdusters feature Travis Book on bass, Andy Falco on guitar, Jeremy Garrett on fiddle, Andy Hall on dobro, and Chris Pandolfi on banjo, and are without a doubt the essence of the bluegrass jam band genre.

When these guys hit the stage, their playing skills were unbelievable from right out of the gate. Playing in support of their newest album Ladies and Gentlemen, the band was joined by Nicki Bluhm for this West Coast tour. The Infamous Stringdusters are a top-notch band hailing from Nashville, playing off of each other with extended jams.

On this evening, the band was video taping the performance and as a result, the lighting backdrops and displays were incredible, which greatly enhanced the entire performance. They had the audience dancing and rockin’ to their brand of Americana music. I can’t wait for the next time they come through town, as they were very entertaining and fun.

(You can find full galleries of The Infamous Stringdusters and Della Mae here and here, respectively.