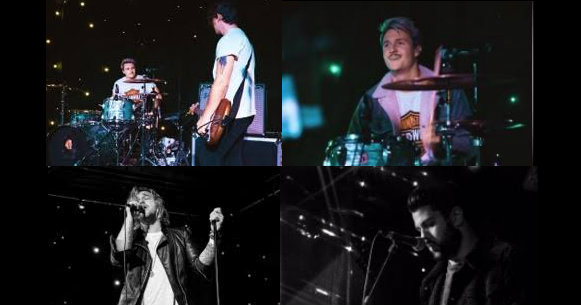 It was a cold and rainy night in Seattle, but that didn’t stop The Griswolds from bringing the heat to Chop Suey on February 8th. Seattle was the first stop for The Griswolds on their six-week headlining tour, and they certainly made it a night to remember. With a little help from their two supporting acts, Wild English and DREAMERS, The Griswolds provided a fiery display of powerful rock music through the entire night.

After the doors of Chop Suey opened (30 minutes late), throngs of soggy fans that had been waiting in the heavy rain piled into the venue, anxious for the show to begin. The first band to play was Seattle’s own Wild English. From their high energy rock songs to their casual banter with the crowd, it was plain to see that they were having just as much fun as the audience. The high point of their set came just after bassist/guitarist Elliot Jensen yelled the introduction to their next track; “THIS IS A SONG ABOUT SMOKING WEED!!” From then on, both the band and the crowd jumped and danced around, having an all around good time.

The second opening slot went to a rising indie-rock band called DREAMERS. Although the trio just began picking up speed during the summer when their album This Album Does Not Exist was released, DREAMERS performed with the poise and grace of a far more experienced group. Lead singer Nick Wold carried the set beautifully through his rich, baritone vocals and plenty of audience interaction. As the night wore on and they began to play their more popular singles, the audience happily sang along, and the set ended on an incredibly strong note.

Around 10:00, the Griswolds finally made their way onstage, welcomed graciously by everyone who had waited hours for their appearance. Their 17 song set began with “Role Models,” the first track off of their sophomore album, High Times for Low Lives. For the rest of the night, the Australian four-piece’s music made the crowd feel every emotion under the sun.

Everyone went wild when favorites from their first album, Be Impressive, were played, such as “16 Years” and “Right on Track.” After the initial hype died down, The Griswolds dove deeper into High Times for Low Lives, playing songs off the new album that had never been played live before. Frontman Chris Whitehall explained that the album was all about how making mistakes is inevitable, and the best thing we can do is to learn from them. Whitehall sang every song with undeniable passion, and happiness radiated from every member of the band as they watched their own lyrics being sung back at them. The night ended with everyone yelling the words to The Griswold’s hit single “Beware the Dog,” and a throwback to their first EP with the fast paced, bass heavy, “Heart of a Lion.”

The Griswolds kicked off their tour in the best way possible, and after seeing their strength as both musicians and performers, it’s plain to see that they have just began to unlock their potential, and everyone should prepare to see big things from them in the near future.