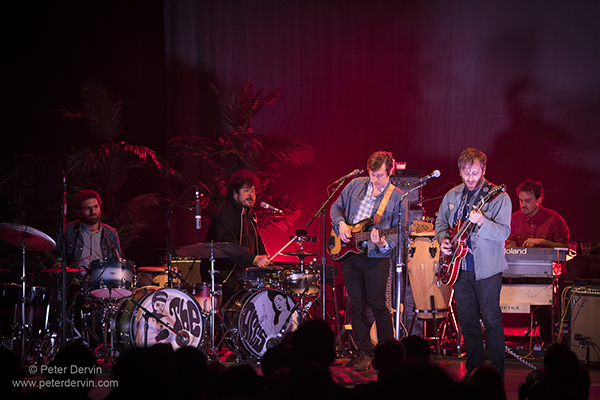 Dan Auerbach, known primarily as the guitarist/vocalist for The Black Keys, over the years has participated in a variety of projects, from producing such artists as Jessica Lea Mayfield, Valerie June, Nikki Lane and Dr. John to his latest project, leading a band called The Arcs.

The Arcs came to Seattle to play the Moore Theatre to a less than half-full venue. This, I must say, surprised me since the last time Mr. Auerbach was in town with the Black Keys, he played to a sold-out crowd at Key Arena. Truly, the fans that were there were in the know regarding The Arcs.

I had learned about The Arcs last year when they released a 10” EP record on a previous Record Store Day (which is coming up at your nearest independent record store on April 16th) called The Arcs vs. The Inventors, Vol. 1. Touring in support of their current album Yours, Dreamily, The Arcs’ sound is big and loud! It was so loud that I had to relocate from the front of house to the upper level.

I love the musical styling of The Arcs, which at times was a driving, pulsating, psychedelic, blast of sound, and other times doing a cover of the Undisputed Truth’s “Smiling Faces Sometimes.” Dan commands the stage, thrashing away on his various guitars in a frenzied performance. Simply, the guy can play, and watching him attack each song was amazing.

Opening the evening was New York’s first all-women mariachi group called Mariach Flor de Toloache. All decked out in their traditional mariachi attire, four of the group members opened with a rousing rendition of the song Guadalajara. Then the surprise of the evening, performing a mariachi infused melody of Nirvana songs. The crowd went nuts! Additionally, Mariachi Flor de Toloachi was nominated for a Latin Grammy for “Best Ranchera Album” in 2015. Keep an eye out for these amazing performers!