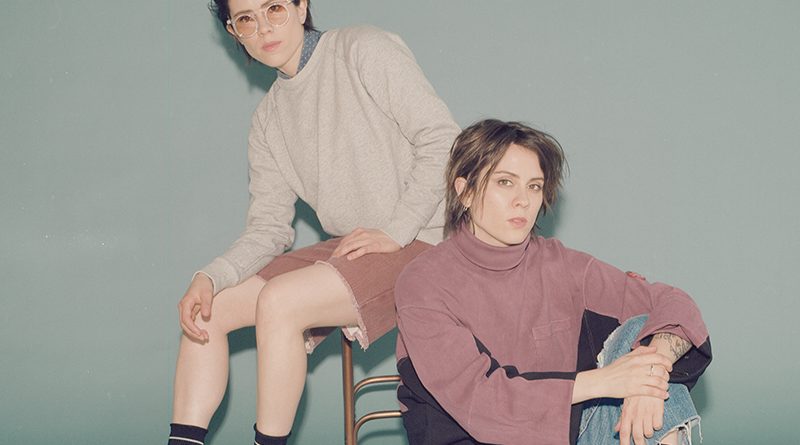 I wasn’t at all familiar with Tegan and Sara’s stuff, so I went into Benaroya’s Illsey Ball Nordstrom Recital Hall on Friday night wondering what lay beyond the door.  The stage showed a piano stage left, several mics, a bookshelf with several tomes facing cover-out, and a screen which I took for a scrim until the Ontario twins made their first “appearance” on it—telling folks to can it with the cell phones and cameras (which by this point, are cell phones, but who’s weighing?).  So the evening went by flash-free.

They’re identical twins and they got the routine dress-alike thing as kids, which they demonstrated in some vintage video on the screen, which sometimes worked and sometimes didn’t.  They chuckled when a fortunately-not-crucial video didn’t play; clearly nervous, they still know how to wrangle a crowd with rabbit-fur gloves. The screen worked its retro magic most of the time, and I realized (again) how much documentation Xers (and beyond) have to themselves.  They seemed to have their whole lives video’d, although they did joke about how much sweat they had to break, to dig up a certain old demo tape. The screen stayed blank during the live action, although the tech crew wandering around back-set registered as squishy oblongs, before peering around to proffer a guitar or two.

Admission included one copy per ticket of the duo’s new book High School, which they brought to life by reading out excerpts.  Each of the books held a single topic, which Tegan, in a black sleeveless top and black pants with a stripe; and Sara, in a sleeveless coverall shades of the Bee Gees touring Main Course, took turns reading out.

The book excerpts took them through uncertainty, doubt, shame, confusion, bullying, that crushing sensation when someone else, someone nasty, seems entirely self-confident.  They worked through both being queer, both having crushes, through one twin not sure how to handle the other one falling in love or something like it. Kurt Cobain and Courtney Love, both stronger as personal objects than through their respective bands, kept the twins company from posters on the wall and constantly out the stereo.

And most of the book bits came with songs.  They took turns at the piano, at guitars, four hands on on piano for one number.  And the songs distilled what they tackled in words; a finer rendering. A crucible. I’m me. I have the right to be me. Tell me what you want, be clear. Or else, just go away. No harm, no foul, but this won’t work unless you’re clear.

They hurt each other, but obviously they’re still together. (And okay, they’re twins, but don’t take togetherness lightly; we live in a world where someone trying to greet an old friend can get four whole days of verbal abuse). They paid tribute to their mother sitting in the front row and said sorry about all the acid we took, but as they admitted, as everybody chuckled, they needed the acid, to get them talking again after a sticky phase.

One of the songs they played in the set, played over the video screen after they left us for the last time. It was okay, but I confess, I liked the spare stage version. Plain, simple. Strength.