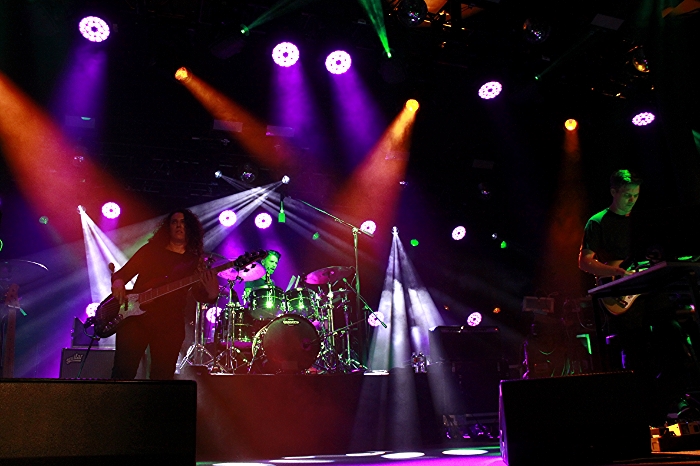 January doesn’t come with a lot of upsides, but it does spark the beginning of touring season for bands gearing up for summer festivals. Sound Tribe Sector Nine (STS9) kicked off their 2016 tour in spectacular fashion in Portland this past Thursday. The winter rains didn’t deter fans from missing out, and the Roseland Theater was packed to the brim with eager fans, many of whom traveled, and several more who were planning on travelling to see the band through their Northwest run.

For the first handful of shows, they sacrificed an opening band in order to give themselves more stage time. Some may call this selfish, but for the die-hards making up the majority of the audience, it was pretty generous of STS9 to give them three hours of sweaty electronic rock.

Selling out in advance felt like an understatement. It was near impossible to make it up to the balcony for a beer, and trying to walk to the other side of the stage was too impossible to justify. It didn’t matter once the music started, however, because there was a sufficient amount of bass to reach all depths of the venue. To much of the audience’s delight, it didn’t take long for heavy-hitting rhythms and deep bass STS9 is known for to make an appearance. It’s somewhat typical for a band to hold back on their first set when they have another one in the works, but that was not the case last Thursday. Aside from the harmonious “New Dawn New Day,” set one was a thundering catapult into this tour. They passed around transitions and built up their jams as good as anyone, and if there was any rust from a short break, it went unnoticed.

A mix of chopped, funky guitar and trance overlays defines much of STS9’s sound, and the end of the first set embodied this when they blended “Walk into the Light” with “Kaya.” The band’s chemistry shined while guitar riffs and keyboard melodies were distributed back and forth until the synthesizers were loud enough to be heard all the way in Seattle.

They carried this energy over into set two and pulled out some of their most recognizable, spacey jams. The bass line ran rampant with “Moon Socket” and “When the Dust Settles” until the piano took over for “Luma Daylight.” This fed right into “Tokyo,” and at this point you had to be asking yourself, “How are the drummers still going?” Yes, that’s two drummers, one on a standard kit and another rocking alternative rhythms on the bongos. This tribal element is another crucial piece Sound Tribe’s tone. Without it, they’re playing electronica, but with it so prevalent, they’ve made themselves futuristic progressive rock.

As the pace slowed down, the crowd stayed captivated by their riveting showmanship. The vocal samples from “World Go Round” were played towards the end of the set to a crowd that has not thinned and they flowed this into the dreamy “Click Lang Echo.” After encoring with “Satori,” the audience had a chance to catch their breath. But given the fact this was only night one, there’s a lot more breath to be lost. 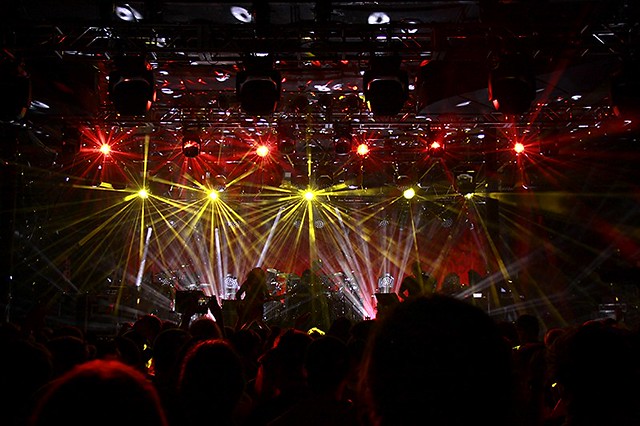