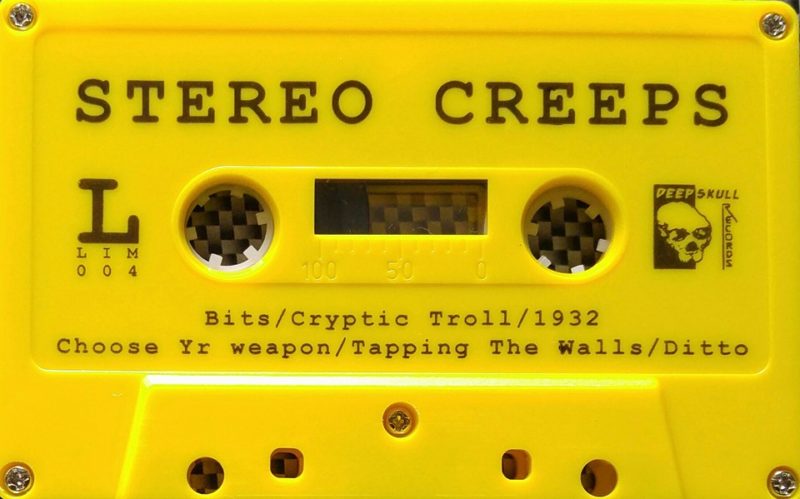 Are you near a thrift store? Good, ‘cause you need a tape player, stat. To spit simply: I stopped counting after the seventh time in a row listening through Cassette, the forthcoming release from Stereo Creeps. I wrote a short film to Cassette. I brushed my teeth to Cassette. I even did some yoga to Cassette because I just did not want to turn it the fuck off. Stereo Creeps’ incredibly crunchtastic sophomore release oozes grooves so deep they must flood out in the winter. Magically classic and ambitiously modern, Cassette makes you want to rock’n’roll go-go dance straight out of your mothership to the streets of 1970’s New York.

“Choose Yr Weapon” and “Tapping the Walls” tug at familiar heartstrings in a newly melancholy and vertigo-inducing way. Don Farwell of Earwig Studio could not have done better; this 14-minute masterpiece leaves you with that weird post-coitus feeling of wanting to bang more and forever – but ya know, in your ear holes instead of your other holes. Like polishing off a whole bag of chips but wanting more because you just can’t stop – don’t want to stop – consuming that addictive crunch.

Cassette is being released through Deepskull Records and Lame Is Me Records, and will be available in-person and on-cassette (only!) starting this Friday, March 11th at Substation as well as at The Valley in Tacoma on Saturday, March 12th. With only 150 copies available (each hand-stamped and numbered), grab your copy of Cassette early before these bad boys are hunted to extinction.