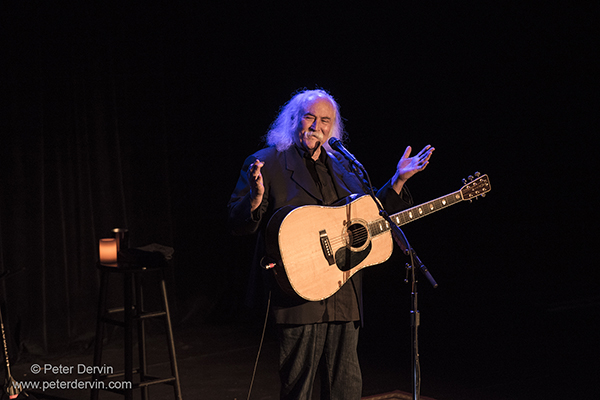 David Crosby, whose career has spanned several decades, creating some of the most memorable music for generations, performed to a sold-out audience at the Neptune Theatre in Seattle.

Strolling onto the stage, David Crosby treated the seated crowd to an evening of songs and stories. Standing solo, acoustic guitar in hand, Crosby sang myriad hits from his catalog. Having been a founding member of the Byrds, and the many collaborations of Crosby & Nash, Crosby, Stills & Nash, and Crosby, Stills, Nash & Young, on this evening it was just David Crosby singing his songs from his point of view.

He sang many of his favorites, including “ Triad” and “Everybody’s Been Burned” from the Byrds period, “Naked In The Rain,” “Where Will I Be,” “Page 43,” and “Carry Me” from his Crosby & Nash albums, “In My Dreams” and the classic song “Guinnevere” he record with Crosby, Stills & Nash. David shared that “Guinnevere” was written for several women in his life, and dedicated this evening’s performance to his wife.

Of the songs performed from his partnerships with Crosby, Stills, Nash and Young, he performed “The Lee Shore,” “Dream For Him” and “Déjà vu,” But also, intertwined throughout the performance were songs from his solo works and a new song for an upcoming album, “What Makes It So,” along with a Snarky Puppy tune called “Somebody Home.”

The evening also featured a couple classic songs from his solo album If I Could Only Remember My Name – “Laughing” and “Cowboy Movie.” But the moment that gave me the chills was his a cappella rendition of “What Are Their Names.”  Prior to singing this song, David explained how messed up the political system is, and that this song was as relevant today as it was when it was written in 1971.

Of the many stories told this evening, we learned of his appreciation of Luthier Roy McAlister. As the story was told, David shared how this guy showed up at his gate, informing him that he had an instrument for him. David expressed his suspicion (“What if the guitar sounded like crap?”), but was taken aback by the sound from this guitar, which he was performing with this evening.

(You can find a full photo gallery from the evening here.)