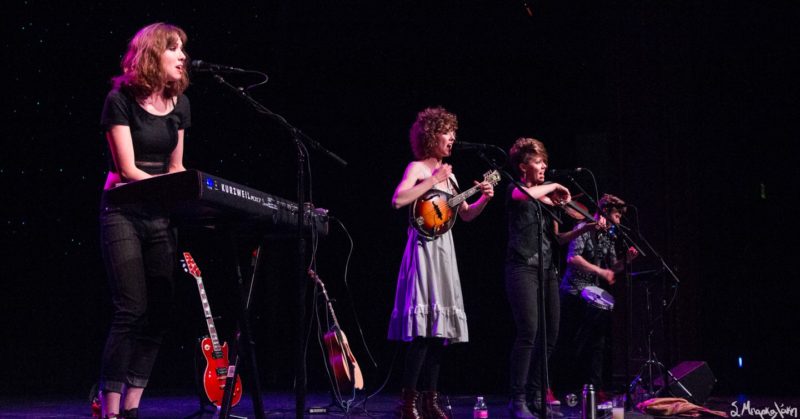 Sisters Sarah, Hannah, Eva, and Liza Holbrook (known collectively as SHEL) just released their sophomore album Just Crazy Enough earlier this month, and we had a chance to catch them in Seattle at the Triple Door touring behind the record. The sister quartet’s love for music developed at a young age, as they were raised in a house by a songwriter father and an artist mother. Their self-titled debut came out in 2012 and since its release, they’ve toured the world and impressed the industry with their glowing talent.

They all stand next to each other on stage playing different instruments, as Eva takes more of the lead vocalist role, playing mostly the electric mandolin. Sarah handles much of the banter between songs but when she plays the violin, the crowd is speechless. Liza provides the rhythm for the tunes, as she plays the bongo along with beatboxing. Hannah was on the keys, but also played a little accordion, which was the coolest thing.

These ladies are captivating, strong, and can play music that captures everyone’s attention. This was their debut show in Seattle, but I’m sure it won’t be their last. They recently released a cover of “Enter Sandman,” which is making the rounds on music sites. If you get a chance take a listen to the band, some of the ones I enjoy (and some of the more well-received ones the ladies played live) include “Lost At Sea,” “Freckles,” “When the Sky Fell,” and “Paint My Life.”