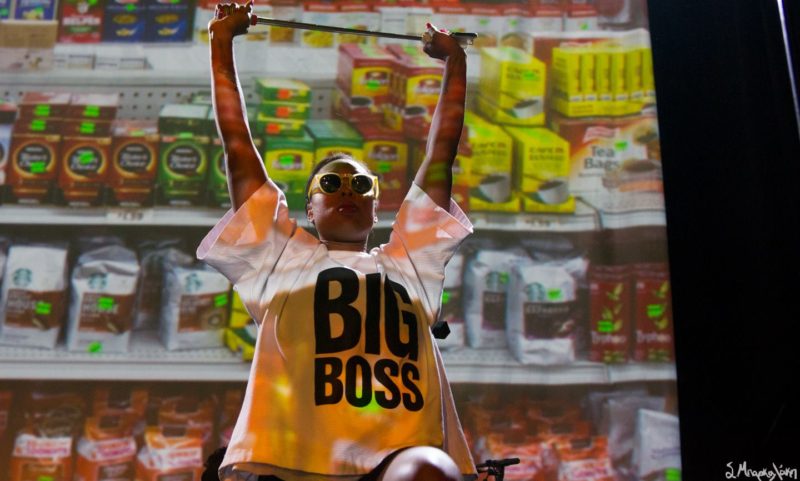 Since her debut record Santogold came out in 2008, Santi “Santigold” White has been praised for her musical style and creative aesthetics at her live shows. The original Little Big Show #15 was postponed due to illness, but everyone was excited to return to the Neptune for the sold-out event. It was the final show for her two-month US tour in support of her third album, 99¢. The night opened with Kilo Kish and DoNormaal before Santigold took the stage around 10:30.

Her set opened with “You’ll Find a Way” with Santi standing in the middle of the stage while her two dancers/performers sat down in inflatable lounge chairs on each side, eating Cheetos. The entire show was as visually pleasing as it was sonically. It was well set up at the right moments to create the perfect marriage between both aspects.

She went on to play my favorites “L.E.S. Artistes” and “Big Boss Big Time Business” as the crowd cheered in excitement for the party that was starting. She had a couple of quick wardrobe changes that were perfectly timed with the focus of the section. During “Desperate Youth,” she had her bubble machines go off, which filled the venue as she danced in the background. After that, she invited some of the fans to come up to the stage to dance with her. People poured onto the side of the stage trying to get picked by her and run up before the space got filled. They all had a blast dancing with her during her huge hit “Creator.”

After that she went backstage for her final change of the night into sweatpants that had her face printed on them and played “GO!.” She thanked the crowd for coming back to the show and waiting for her. She asked if anyone was from Brooklyn as she was preparing for cover Jay Z’s “Brooklyn Go Hard.” She told us that we’re going to party like we’re in Brooklyn, which, ironically, we were all on Brooklyn Ave tonight.

She finished her set with “Shove It” and “Can’t Get Enough of Myself,” and then came back for the encore with a cover of Major Lazer’s “Hold the Line.” I’m sure she enjoys their rise to fame, as Diplo and Switch helped produce her debut record. The last song was “Big Mouth,” which had everyone in the room dancing as far as the end of the balcony section. It was a great show to see, and Santigold feels like a breath of fresh air, as at the moment she can’t be compared to anyone else.