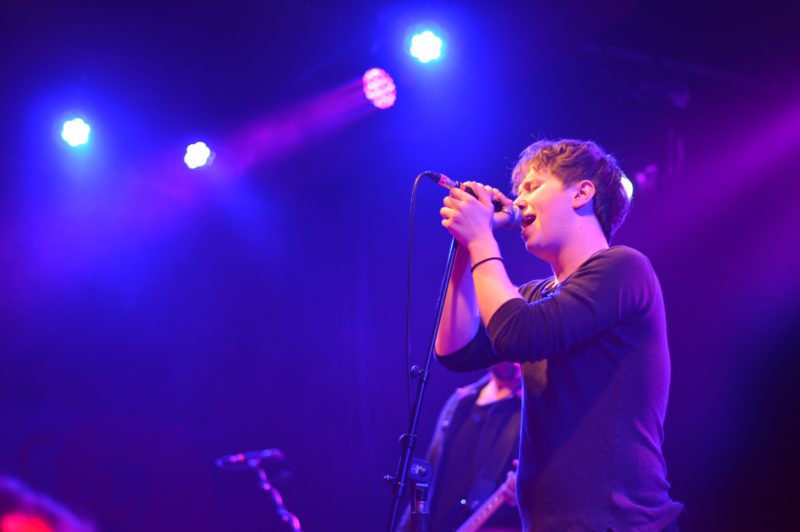 The only thing more exciting than finally receiving a long-awaited concert ticket is actually being at the show. Nothing But Thieves, a 5-piece band from Southend in Essex, had quite a year. After releasing their debut self-titled album in the UK late last year, and having to move their own tour dates around to open for Muse, they’ve finally made it over to the states for their “Under My Skin Tour.”

Doors opened around 8, and everyone flooded into the Crocodile. The Crocodile itself is actually a pretty cool venue, with a nicely-sized stage and a smaller crowd area, usually for less popular bands and a more intimate show. When they sell tickets for their shows, you are required to indicate if you’re are over or under 21. If the venue sells a certain number of 21+ tickets, everyone underage is squished into the little kiddy zone at the side of the stage. This is pretty rough considering that the age barrier isn’t even close to centerstage, it’s way off to the side, and it always get much more packed than the older side, particularly at this show.

The show began as openers The Wrecks entered the stage. I had listened to their stuff prior to the show, liked it, but wasn’t super familiar with their music. The band absolutely killed it though; they had a fantastic set. They came out on stage and played, completely confident in themselves and with tons of energy. They’re the kind of band that’s fun to watch and dance to, regardless of whether you’re their biggest or their newest fan. The Wrecks only have three tracks available on Spotify and iTunes, but they played some new stuff at the show that sounded fantastic.

When Nothing But Thieves finally came on afterwards, the crowd went wild. Opening with one of their first songs “Itch,” it was instantly evident how much the crowd loved the album— singing back all the lyrics, but staying quiet at the right times to hear lead singer Conor’s voice. For the first couple songs, there were some technical difficulties with Conor’s earpiece cutting in and out, and after replacing it multiple times, he finally just said “Fuck it,” took it off, and sang the next song. The track that he ended up singing without the earpiece happened to be “Graveyard Whistling,” another one of the band’s older songs. As a slower, more atmospheric and ethereal-sounding track, it’s largely focused on vocals, and is amazing to watch and listen to live.

Conor begins to talk to the crowd, welcoming them and claiming how much he already loved Seattle, though this was their first time here. He began to talk about the band’s earlier years and how he and Joe, one of the guitarists, had been in and out of bands since they were around twelve. He explained how when you’ve been playing and writing music for so long, there are certain bands that influence you along the way, and one of the those bands for Nothing But Thieves was Pixies. After the brief story time, they launch into their cover of Pixies’ “Where Is My Mind?” The original is one of my favorite songs, so of course I was excited to hear that one of my favorite bands was covering it, and had pretty high hopes. The cover blew my expectations, and was incredibly and well done — it sounded as if it was originally written for Nothing But Thieves.

After a few more songs, the band slowed it down with “If I Get High.” This is one of the slower tracks on the album, with deeper lyrics about getting high in hopes of reconnecting with someone you’ve lost. The whole crowd sings along, and listens to Conor sing with passion and meaning. Around the middle of the song, he asks everyone to pull out the lights on their phones and turn them on. As he sings the next chorus, all the little lights go up, creating an oddly magical-feeling environment. A few fantastic songs go by, and the band leaves the stage after what felt like a much too short set.

There were only about three or four people in the crowd who had previously seen the band, so I’m not sure who actually knew if the band was coming back out for an encore, but absolutely no one was moving. A couple minutes pass, and only half the band re-enters. They begin to play another one of the slower songs, “Lover, Please Stay.” This is one of my favorite NBT songs, but I’ve only ever heard it on the album and through YouTube videos. There’s something about the way that they play it and sing it live that makes it so much more passionate and intense. Honestly, I think the performance of that single track was worth the price of the ticket, and there were probably a few teary eyes in the crowd.

The band drops into probably their most popular track, “Trip Switch,” as everyone jumps around screaming the lyrics back. Finally, they close with “Ban All the Music,” which is performed with enough energy to fuel the sun. Lots of applause, thanks, and shouts later, the Nothing But Thieves eventually leaves the stage of their debut Seattle performance.

This is actually the second time I’ve had the pleasure of seeing these guys live. I was fortunate enough to see their little San Francisco debut in February, and I was just as excited for this show as I was the last, as I knew what was in store. As amazing as that SF show was, over these three months, it’s only gotten better. They seem to be so much more comfortable with their performance now, and really put more of themselves into it. Conor was much more bubbly this time around, and the earpiece mishaps really didn’t seem to be an issue at all.

One thing that sets their live show apart from their album is the instrumentals too. There were multiple points in the show where, between verses and choruses of songs, there would be extended instrumental breaks that just felt like they fit perfectly, no matter how used to the album you were. The boys are also incredibly humble, constantly thanking the crowd for coming, and overall just looking as happy as anyone in the crowd to be there. Nothing But Thieves has an album that is extremely well done, and a live performance that truly does bring it to life in an incredible way that sets their set apart from any other.