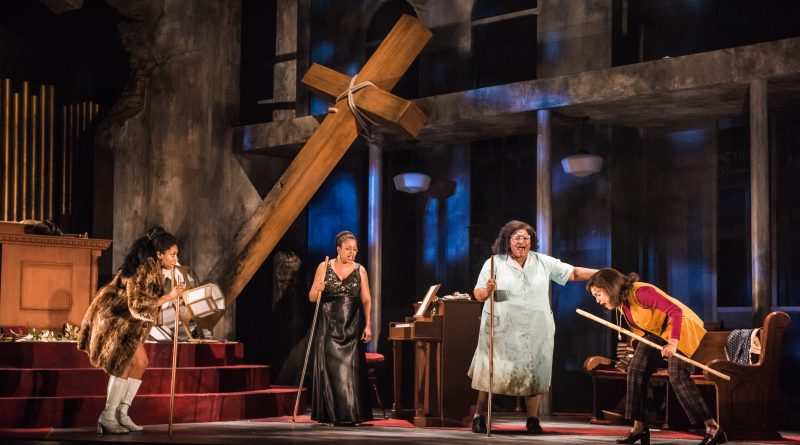 Nina Simone: Four Women, currently running at the Seattle Repertory Theatre through June 2, is a variation on the themes that Simone explored in her song “Four Women.” A refresher course; Simone’s song, first released on the 1966 album Wild is the Wind, served up pen portraits of four different African-American women: middle-aged Aunt Sarah (“My skin is black”), embodying tradition; Saffronia (“My skin is yellow”), whose birth was the result of sexual violence; the smart-talking prostitute Sweet Thing (“My skin is tan”); and the tough, no nonsense Peaches (“My skin is brown”). Different as their lives are depicted in the song, one thing they all share is strength and resilience. The song is also a statement of pride, of reclaiming one’s beauty in defiance of societal standards, quite timely in an era that saw the rise of the slogan “Black is Beautiful.”

Playwright Christina Ham has taken these archetypes and made them the four characters of her show (with Peaches renamed Nina). The story is set at the very moment when Simone became an outspoken civil rights activist, in response to the horrific bombing of the 16th Street Baptist Church in Birmingham, Alabama on September 15, 1963, that took the lives of Addie Mae Collins (age 14), Carol Denise McNair (age 11), Carole Robertson (age 14), and Cynthia Wesley (age 14), and injured over 20 others.

Ham’s play makes Simone’s transformational moment explicit and blunt. It opens with Simone in her best supper club attire, coming through the curtain center stage, singing her first hit, “I Loves You, Porgy,” from George Gershwin’s musical Porgy and Bess. Then, mid-song —bang! — there’s a sharp explosion, and the curtains part, revealing the interior of the devastated church in the aftermath of the blast, loose paper falling down like snow. As the other characters seek refuge in the sanctuary with Nina, a discussion ensues between them, about race, class, sex, and the best way to respond to the violence that’s happening right outside the door.

Each woman has a different perspective (you could also view them as four sides of the same woman). Aunt Sarah puts her faith in God. Sephronia (usually spelled “Saffronia” in the song’s lyric) wants to march for change. Sweet Thing is getting it while she can. And as for Nina, she’s working on finishing her first protest song, “Mississippi Goddam,” vowing, “I’ll slay folks with my lyrics, and save my bullets for later.”

“Mississippi Goddam,” released in 1964, is a song of fierce social commentary, one that wouldn’t be out of place in such equally pointed works as The Threepenny Opera and Sweeney Todd. And the biting lyrics still have painful resonance:

Picket lines
School boycotts
They try to say it’s a communist plot
All I want is equality
For my sister, my brother, my people, and me

As contemporary as today’s headlines. Indeed, the show put me in mind of another song, “Everything Old is New Again.” The 16th Street Baptist Church bombing was a turning point in the civil rights struggle in the United States, and it’s hard not to feel discouraged when you look around see the same atrocities being committed today (indeed, a week before I saw the show, a man was arrested for driving his car into a crowd of people in Sunnyvale, California; police believe he was targeting people he thought were Muslim). Sex roles come under scrutiny, the characters wondering if women are ceding their place in the civil rights movement to the men. And race is a topic in more ways than one, as the women debate colorism in their own community; Sephronia is derided for the presumed “benefits” her lighter skin brings her, but she reminds them that to white people she’s still regarded as black.

All four actresses — Shontina Vernon (Nina), Shaunyce Omar (Sarah), Britney Nicole Simpson (Sephronia), Porscha Shaw (Sweet Thing) — have strong and compelling voices, well suited to the songs used in the show. The songs serve as moments that bring the characters together; Simone’s “Sinnerman” and “To Be Young, Gifted and Black,” the hymns “His Eye is on the Sparrow” and “God Be With You ‘Til We Meet Again,” and of course “Mississippi Goddam” and “Four Women.” Ironically, the song that got the biggest response from the audience was an original number by Ham, “Shout Oh, Mary,” a riveting incantation that had the characters each holding a staff they brought down on the stage with a resounding thump, while singing to the rafters.

Nina Simone: Four Women is about ideas and debates we’re still having today, and how the energy of those debates inspires music and art. It’s a reminder of how far we have come, and also how far we still have to go. But the songs of Nina Simone make that journey a little bit easier.