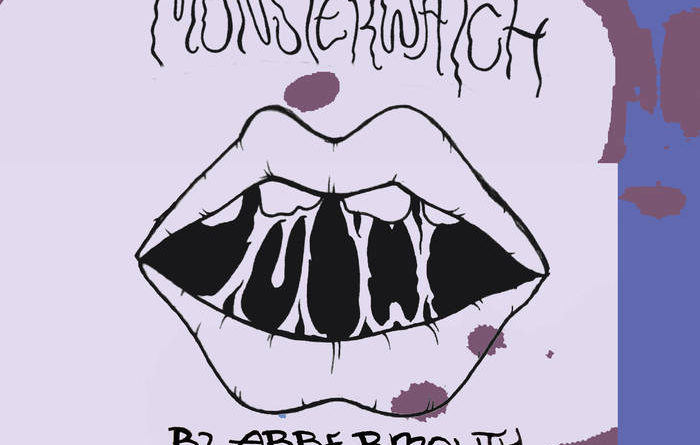 Have you ever had a dream where you’re dropped into a scene, Matrix-style, and you don’t know how you got there or why you’re carrying a bloody knife? Well, Monsterwatch’s Blabbermouth would be the soundtrack to that dream. And you damn well better start running because those police sirens aren’t getting any softer.

Blabbermouth is a collection of four confrontational, unapologetic, fearsome, absurd songs (three originals and a cover) reminiscent of 1970s UK punk. Although they’ve unleashed two very polished music videos, this is actually Monsterwatch’s first record. Comprised of John Spinney (vocals, guitar), Jack Cornwell (drums), Charles Richards (bass) and Johnny Velazquez (guitar), the band came out swinging last year, generating a lot of underground buzz with a string of consistently hip performances. Due out on April 11th by Noise Noise Ouch Stop Records, anticipation is about as high as it can get for an EP release.

“Two-Time” is a menacing and unblinking track. Velazquez’s heavy distortion and Richards’ hypnotic bass lines are overlaid with Spinney’s bipolar bellowing and Cornwall’s rhythmic beat. The song doesn’t build stress, it starts with it and keeps it level throughout, both wearing you down and energizing you at the same time.

“Tuesday” is a one and a half minute glorification of denial and anarchy. Both the music and lyrics are mannerless, either alternating or competing throughout. There are only four lines in this song, so you’re sure to be caught off guard (and kind of pissed) when the song ends abruptly, cutting you off mid-dance. You’ve been warned.

“Spit In Your Face” is next, giving you (somewhat of) a breather. The first few times you hear this rambling worm of a song, you might be thinking “Seriously, WTF is this?” but it grows on you, eventually turning into a game of “20 questions.” Queries like “Is this a drunk, mid-life crisis Cookie Monster singing?”, “Seriously, what’s he trying to say?”, “How high WAS he?”, “Was this recorded on an iPhone?”, etc. (Btw, the answer to that last question is “yes”.) Eventually you realize the joke’s on you, it’s just a demo, so you shake your head and move on.

“Inside Out” (a 999 cover) is more mainstream punk, but like Bellingham mainstream, not Seattle mainstream. There are a lot of crashing cymbals and note bends with Spinney sticking to his weaving and manic vocal styling, accentuated with chorus-ending yelps and warbles. It’s one of the band’s favorites so you’ll usually hear it at their shows. In fact, you’ll probably karaoke this yourself on first listening.

But the fun doesn’t have to end there. Blabbermouth also includes live versions of “Two-Time” and “Tuesday”. Or you can find more of Monsterwatch online at https://www.monsterwatchnoise.com, Spotify, iTunes, etc. Or you can order Blabbermouth as a pre-release on Bandcamp. Or you can click below to watch their comical video, “Tuesday.” Or not. I doubt they’re tracking these sorts of things.