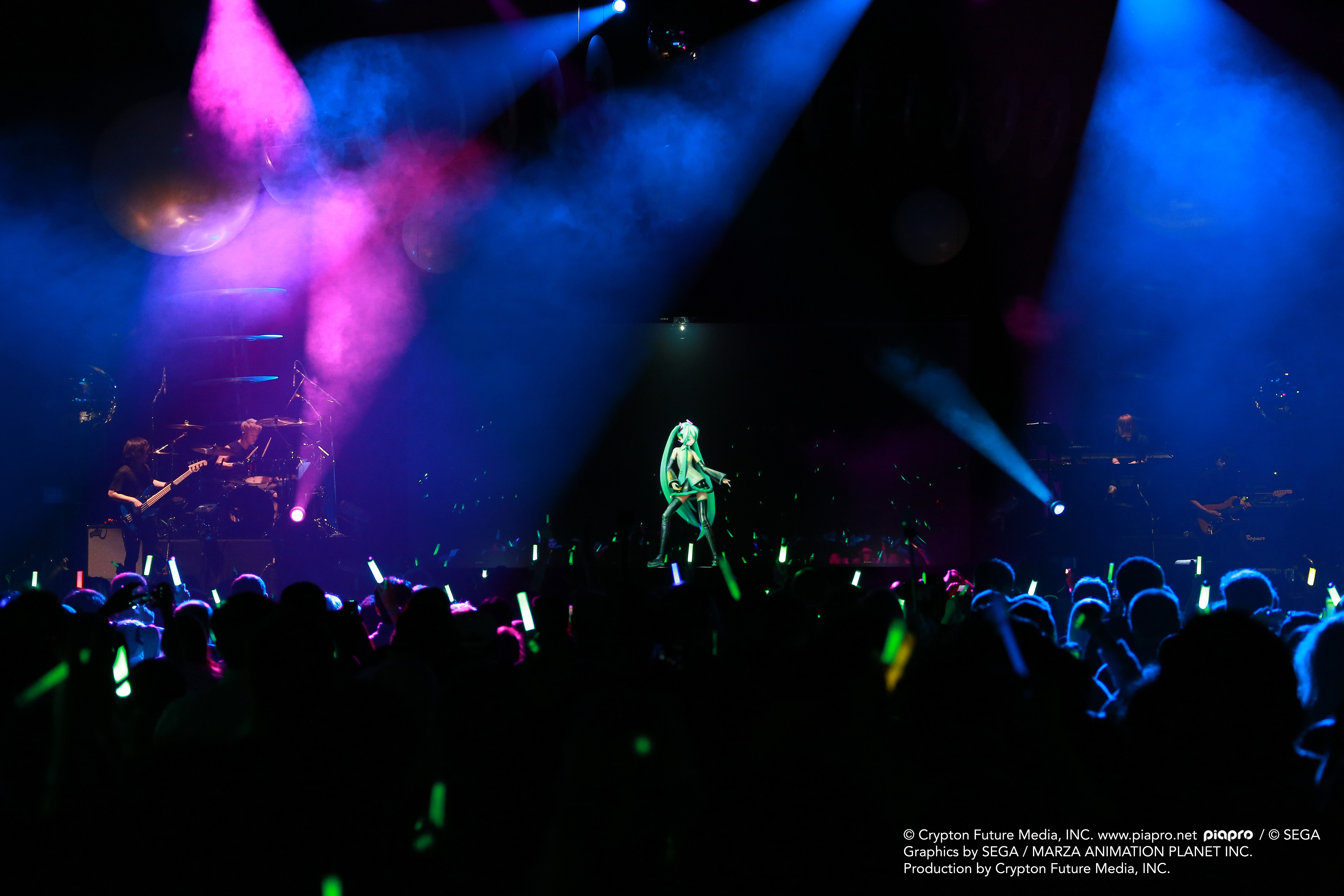 Miku Expo 2016 was an event I never expected to be brought over to the states. I’d seen live performances of the Hatsune Miku hologram performing live in Japan before, and always thought it looked like one of the most mind-blowing and creative uses of modern technology ever, but I always just assumed it would be like Primavera Sound or wild kangaroos, just one of those really cool things other parts of the world get, while we can only watch from afar with tears in our uncultured, Japanophilic eyes (outside of very rare hologram appearances opening for Lady Gaga and stuff like that). But alas, those in Seattle (among many other parts of North America) were lucky enough to get the Miku Expo 2016 at the WaMu Theater, with many an anime fan lined up all the way down Occidental Way (and curving down King Street) to join in on the party.

For those of you have been living under an otaku-resistant rock for the past decade or so, Vocaloids are these fictional idol characters that were born out of singing synthesis programs of the same name. Though I’ve always found the Vocaloid software to be incredibly fascinating in itself, the idols born from it took on a whole new level of love and popularity, with their own wildly popular original songs, and most if not all became icons in Japan and the more Japan-obsessed parts of American culture, with Hatsune Miku easily being the most popular one of the bunch. Take it from someone that’s been going to Sakura-Con for seven years, you can’t shift your eyes from one side of the room to another without seeing at least 12 Hatsune Mikus and 5 Megurine Lukas.

Getting to see the Hatsune Miku hologram live in concert in Seattle would’ve been enticing enough, but when I found the night would be opened by the awesome 8-bit synth-pop-rock band Anamanaguchi, my intrigue turned into hot anticipation. The four-piece band took to the WaMu Theater stage at the dawn of 8:00 to work their J-pop-influenced magic in front of an endless sea of glowsticks. Though their stage presence was somewhat minimal, they definitely brought it on the performance side of things. Getting to watch lead guitarists Peter Berkman and Ary Warnaar shred in glorious 8-bit was a treat, and I was surprised at just how hard drummer Luke Silas goes in the live setting.

Songs like “Prom Night” and “Meow” (the latter being a personal favorite) absolutely lit up the theater, and their radiant, neon-colored pop-rock tracks were matched with a high-budget stage setup, with all sorts of vibrant lights and eccentric stage decoration. Their performance was high-energy, it was impassioned, and frankly, I can’t think of a better warm-up for the night to come. Granted, I don’t think any band (regardless of their level of self-seriousness) would say no to being offered the chance to open for a fictional hologram Japanese pop idol, but with how bright and fun-loving Anamanaguchi’s music is, and how indebted they are to Nakata-esque J-pop music, they were the perfect firestarter for the night.

“Thank you all for coming to the Miku Expo 2016,” Uttered a voice over the loud-speaker as the clock struck 9:00P.M. The organizers putting on the event seemed genuinely thrilled that this many people were interested in seeing such an unconventional live performance in the flesh, but considering the theater was just about to-capacity, it was clear this wasn’t just an underground niche thing that a couple hundred people were interested in. You could tell this was an event that truly transcended social boundaries, with everyone from tween Vocaloid obsessives to 40-something parents to little girls teenage Internet-dwellers in Needle Drop and Yung Lean T-shirts all screaming their brains out for Miku and her fellow Vocaloids.

Miku’s four-part band filed onto the stage one by one as the silk-screen began introducing the individual members. The quartet jammed on their own for a little bit, giving the audience a taste of the backing band’s chops as performers. They were no small potatoes, either. Kensuke Ito’s drumming was fierce, busy and technical, and the keyboard playing courtesy of multi-instrumentalist MEG.ME was flashy and sounded great. Meanwhile, bassist Tsuguhito Konno was a beast on the bass, delivering a lot of rumbling bass leads, and diverging into Billy Sheehan-level bass solos when prompted. However, the real showstopper in the band was lead guitarist Takahiro Misawa, who was, to put it elegantly, a complete psycho hose beast on the guitar. All of his playing throughout all of the songs were monstrous, and when it came time for him to solo over many of these tracks, he didn’t hold anything back. You could tell the people they hired to play with Miku weren’t just amateur nobodies, they knew their stuff, and played off each other amazingly well, despite only being on the sides of the stages throughout the entire performance.

After a brief, eye-catching intro with textured projected visuals, spotlights were shone on the center of the stage, and from a cloud of green and blue pixels emerged the Hatsune Miku hologram, to an almost deafening crowd reception. The idol appeared in her trademark skirt and bicep-length gloves amid a barrage of lights and fog machines. From the word go, I was floored by the technology on display. Though the method they used was ostensibly simple — it was basically just a thin silkscreen they put the moving onto, a method I’ve seen used by guys like Steven Wilson in the live setting before — the result was even more impressive in the live setting than it was on video. The amount of detail put into the hologram’s every last movement was insane, and the framerate at which it moved was so realistic, you probably could’ve fooled the younger audience members into believing it was actually a real-life cartoon character on stage performing.

Though I thought it would be the case, Miku wasn’t the only of her kind to show up. Around a quarter of the way through the performance, Megurine Luka was conjured from the ether to join Miku for the duet “Magnet,” and Luka would later show up for a solo performance. MEIKO showed for a single performance, as did KAITO, who seemed to be one of the more wild crowd-pleasers of the night. But man, when Rin and Len faded in from yellow pixel-clouds for a couple songs, it was like the fucking moon landing in that theater. The quality persisted throughout the different hologram performers, particularly Rin and Len’s performances, which felt scarily lifelike with their interactions and the way they would mess with each other while performing. What really got me were any of the performances in which Miku would be playing her guitar along with the band, as even the animated guitar fingering seemed almost neurotically on-point with what was being played/incorporated into the song. It was insane.

As for the musical performances themselves, the band knocked it out of the park track for track. It didn’t seem like there was a lot of backing tracks at play throughout (aside from the vocals, obviously), and even on the more toned-down and musically simple songs, the live band still managed to play each song to perfection. I’ve always been infatuated with J-pop music, and how a lot of it seems equal parts pop and rock. Though J-pop (and Vocaloid music in particular) often has sugary and glossy synthesizers and 4/4 dance kicks at the forefront, it isn’t uncommon for music of this kind to randomly bust into a blistering guitar solo over the bridge. The Hatsune Miku performance struck a great balance between feeling like a synthetic, simulated live performance and having that urgent, in-the-moment feeling of an electrifying live performance.

I could talk for another 1,453 words about how amazing the live performance was and how crazy-detailed everything was, like the incredible shadow effects on the holograms, the clever use of holographic stage monitors for Miku to stand on during one particular song, and the very clever final song of the night, which was just a dark, intimate performance with Miku at a keyboard without any of the band members on stage. But it’s truly one of those spectacles that you can only fully understand when you’re there in the theater watching it live. It’s probably one of those events where you have to be into weird Japanese pop culture phenomena and imaginative uses of modern technology to wholly appreciate what you’re watching, but if the idea of watching a fictional pop star realistically dance around a stage with overwhelming lights and a killer live band sounds like a fun time, the Miku Expo is a pretty incredible and enlightening experience.