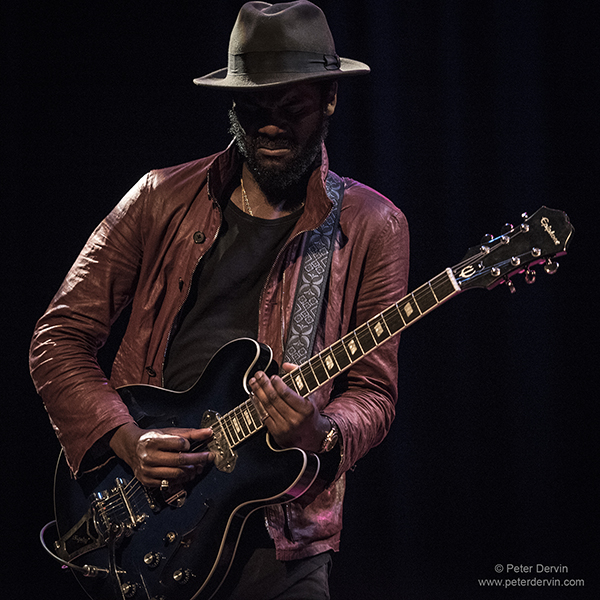 As I arrived to the Moore Theatre on this lovely spring evening, the line outside the Moore Theatre stretched down the block for the amazing Gary Clark Jr. who has been on tour in support of his latest album, The Story of Sonny Boy Slim.

I was fortunate to have caught Gary Clark Jr. (for the first time) a few weeks earlier at the McDowell Mountain Music Festival in Phoenix, Arizona, and was so impressed that there was no way I was going to miss his performance at the Moore Theatre in Seattle.

Entering the venue, you could feel the energy from the sold-out crowd waiting in anticipation. Opening this evening was a band of sisters from Sweden, BASKERY, who have relocated to Los Angeles. Siblings Greta, Stella & Sunniva Bondesson played an energetic set of rock songs that were danceable and fun. When you see them on stage, they are always engaging with the audience, and they were a perfect opening band for the evening. I’ll certainly look forward to the next time they come to Seattle.

As the lights dimmed, the band strolled out onto the stage, and emerging from the shadows was Gary Clark Jr., who has quickly become one of the emerging blues guitarists, bringing new found excitement to the electric blues genre. A tall and lanky presence on stage, Gary Clark Jr. plays his electric guitar with a smooth flowing style and then has the ability to completely rip it apart.

Mixing it up with his Gibson, Epiphone and Fender guitars, Clark displayed his amazing skills in electric blues. Rockin’ hard and furious, Clark plays with power and force, which takes it to another level. It’s exciting to see his continued rise in the music world.

Backing Gary Clark Jr. is a top notch band featuring Johnny Bradley on bass, King Zapata on Guitar and Johnny Radelat on Drums. These guys bring it in with some excellent playing in their own right. All said, Gary Clark Jr. and his band are one of those must-see bands touring the country right now. There are still a few more dates here in the Pacific Northwest, in Vancouver and Portland before they head on down the road to perform at Coachella.

(Check out the full gallery of shots here.)