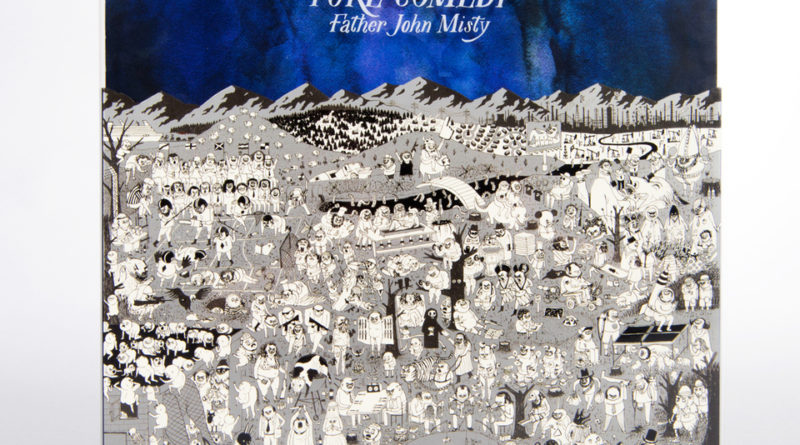 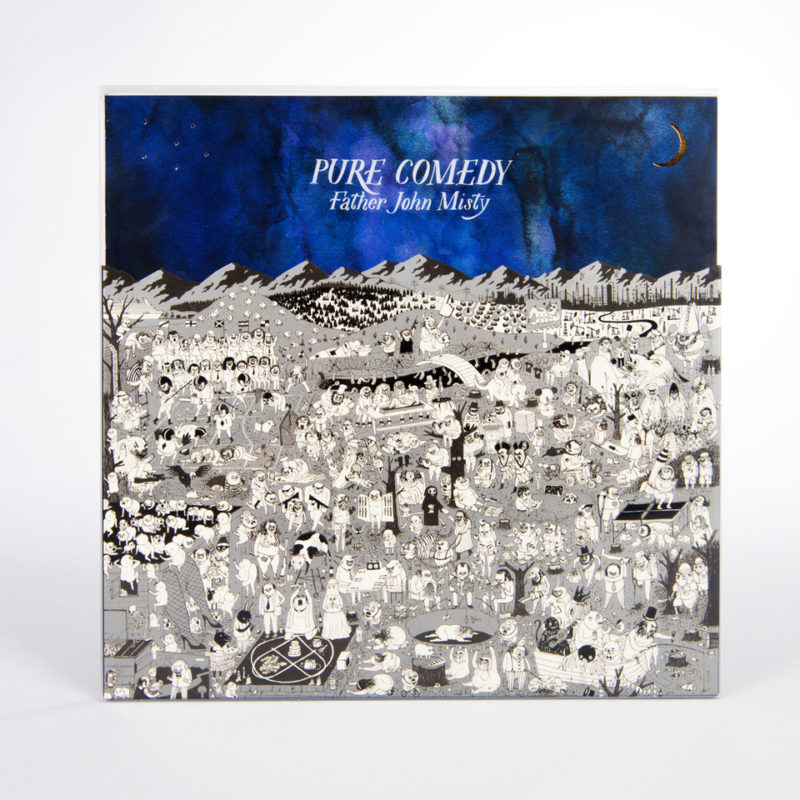 On Tuesday, November 8th, 2016, the United States temporarily existed within a different atmosphere than the rest of the world. In Seattle, sounds were no longer capable of echoing, simply concluding in harsh thuds. A scene from that night often plays out in my mind: my girlfriend and I are in the back of an Uber, I’m in a state of shock and useless, she is crying at the prospect of what’s to come, and our Uber driver is confused and oblivious. He asks her, “Hey? What’s the matter? Are you okay?” She says that she is not okay, and he informs her that he has the cure for those blue feelings. He then proceeds to blast Adele’s “Rolling in the Deep.” “Music always makes me feel better,” he says.

To me, this scene serves as the foundation for Father John Misty’s Pure Comedy (Sub Pop, 2017). By its own admission, the record serves as a mockumentary on the subject of the emerging digital dystopia; it is a non-diegetic soundtrack to the moments where isolated cyber culture infiltrates society, where a man can “shitpost” his way to the presidency, and a driver summoned by an app on a drunk couple’s smartphone can play therapist with a top 40 song.

Pure Comedy’s title track serves as an thematic overture that kicks things off with singer Joshua Tillman’s best David Attenborough impression. In his signature talk-croon, Tillman relates the entire story of human history to the listener, a comically ambitious task for a single song to take on. Musically, it’s incredible. The instrumentals are intricate and theatrical, and few indie rock artists are capable of matching Tillman’s vocal prowess when he really lets it rip. Lyrically, its slurry of hypotheticals and pointed questions runs the gamut from sincere to just plain ornery, toeing a fine line between insightful and pretentious–Tillman can sometimes come across more like Frasier Crane throwing shade at pedestrians from his high rise than Johnny Cash playing for prisoners.

Tillman is an interesting character in 2017. On one hand, he is a sex-soaked misanthrope sneering at all the little self-indulgences of our generation, on the other, a gentle defender of the human condition: his anger, like that of many fathers, stems from disappointment rather than disgust. “The Memo” aims that disappointment at the industry in which Tillman finds himself entrenched. With writing credits on major pop hits and the mainstream success of his own records, Tillman has become one of the insiders he has consistently rebelled against. “Memo” is a takedown of Target playlists and the data mining wielded by major music services against their customers, condemning the snake oil of industry tricks (even as the record itself comes in several color variants and and editions, including a Target-exclusive CD with extra songs). This track also comes closest to the engrossing sonic twists of I Love You, Honeybear, with glitched vocals and digital samples suddenly appearing over a relatively simple country song.

Pure Comedy’s most telling track is “When the God of Love Returns.” The song’s conceit centers around Tillman guiding Christ through the Earth moments before the rapture. The song starts off in a predictable grumble against the failings of mankind, the box stores, the wars, and the hatred, but quickly takes a humanist twist–instead of throwing humanity under the bus, Tillman accepts the role of champion. He tells the God of Love, “You must not know the first thing about human nature/We’re the Earth’s most soulful predator,” before snidely remarking, “Try something less ambitious the next time you get bored.”

Beyond ruminating on the existential questions and plights of humanity, much of Pure Comedy dwells on Tillman as an individual. “Leaving LA” is less a song and more a 13-minute long audiobook, concluding with a suite of verses detailing Tillman’s relationship with art. Several lines serve as responses to the questions that have plagued him since the conception of FJM: “I never learned to play the lead guitar/I’ve always much preferred the speaking parts,” for example, explains his departure from his role as drummer for legendary indie rock group Fleet Foxes in pursuit of the spotlight.

The final track, “In Twenty Years or So,” rejects the apocalyptic tone of the rest of the record, returning to the stage set by I Love You, Honeybear. Tillman breaks his train of thought regarding global warming and its ramifications on the global food supply to absorb the scene around him: a pianist performs “This Must Be the Place” while he stares at his wife. He simply concludes: “It’s a miracle to be alive… There’s nothing to fear.”

Pure Comedy is bizarre. It’s gorgeous, complex, and oozing liberal satire like a New Yorker comic collection left in the sun, a manifesto against the current oligarchy as much as it is a love letter towards those who are suffering and complicit in its trappings. Admittedly, the record lacks the replayability of Tillman’s former works–its sonic sprawl can leave a listener exhausted, but that’s not exactly the point. It’s less a mixtape and more a signal flare: immediate, foreboding, and most importantly, beautiful.

(Check out the full album stream for Pure Comedy below and purchase the album at Sub Pop. You can also keep up with Father John Misty at Twitter HERE.)