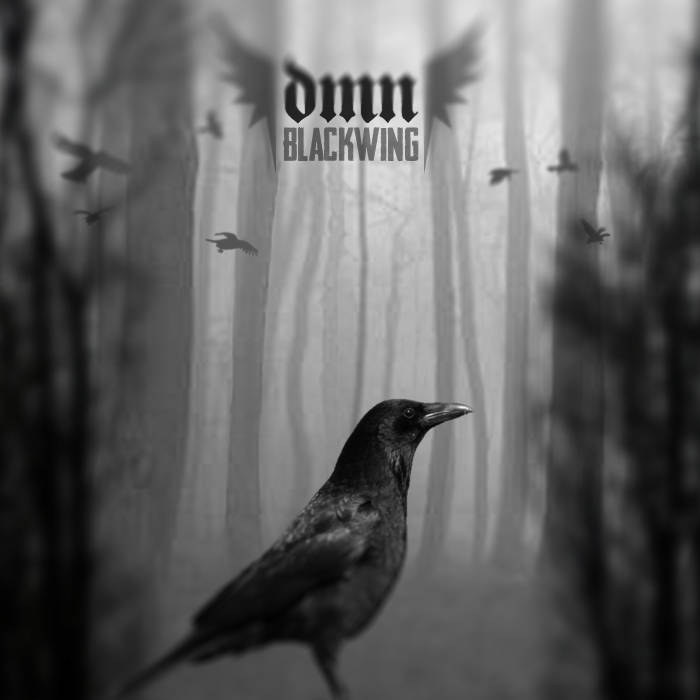 I’m usually pretty suspicious of bands that self-identify as “dark,” a vague and extremely subjective term at best. When you tout a band or song as being “dark,” that could mean anything from lowering an octave on your synthesizers and throwing a reverb plugin onto the master channel to singing about laughing at photos of the Hindenburg disaster over Paulstretched samples of infants being strangled.

Seattle’s Dark Matter Noise raised just about every red flag in this regard, from their name, to their black-and-white album cover, to their Evanescence-level song titles (“Edge of Sanity,” “Hell’s Frozen,” Scar,” etc.), even down to their album being called Blackwing. If I had guessed what they’d sound like just based on their image and presentation, I would’ve just assumed they were a third-rate Flyleaf or Puddle of Mudd clone, as opposed to the most exciting and daring gothic band coming out of the Pacific Northwest, with a hot contender for northwest album of the year just a few months into 2016.

I tell ‘ya, Dark Matter Noise’s Blackwing would fetch a high price at a Western Washington sperm bank, with the mouth-watering pedigree behind it. The outfit is spearheaded by Al Tompkins, whose talents have put him in positions to work with local metal heavyweight Brothers of the Sonic Cloth. Furthermore, the record is mixed and mastered by Brothers’ main brain, legendary producer-engineer-musician Tad Doyle. On top of that, you have guest contributions from cult Tacoma industrial musician Charlie Drown, who shows up on a couple tracks here to lay down her idiosyncratic vocals. It’s like a Broken Social Scene of great northwest talent.

Blackwing brings a lot of unique sounds and influences to the table. Right from the opening title track, you’re assaulted with a heavy, noisy and punishing sound that sounds like the world’s loudest industrial rock, synthpunk and shoegaze bands all playing in unison while simultaneously being burned alive. Somewhat glossy trance-esque synth leads are backed up with a grooving and explosive kick-snare pattern that dominates the track. This track isn’t alone in its ass-whooping percussion; if there’s anything you’ll be immediately won over by with Blackwing, it’s the booming, dominant drums, which are only seldom digitally programmed.

The dark aspects of this record lie mainly in its synth work and the vocal deliveries of Tompkins and co. Tompkins’ vocals on Blackwing are mostly performed in a deadpan and deep-voiced manner, and are often buried deep into the mix, like a creepy voice beckoning you from the opposite end of a dark room. When listening to Tompkins on this record, you can hear a bit of Ian Curtis and Peter Murphy worship in his delivery, and his cadence does a good job of complimenting the sonic mayhem. On the couple instances where Charlie Drown hops on a track, her vocals lend themselves well to DMN’s sound as well, and give the songs a delectably over-the-top flair.

Blackwing was born out of experimentation with HIVE, a new VST analogue synth whose presence on this record gives DMN an edge you just don’t find every day in today’s somewhat formulaic industrial-goth scene. The synthesizer work on the LP is often thick, it’s cacophonous, and it has a good sense of variety. Assuming all the synthesizer work on this record is done with HIVE, it serves as an excellent display of just what the softsynth is capable of. While the synths on “Scar” may be melodic and light on the ears, those found on “Edge of Sanity” are squelching and overwhelming, with a peppy drum lead serving as the perfect backdrop. Blackwing is certainly “electronic” to an extent – especially with the overtly electronic, noise-pop-esque “Hell’s Frozen,” the second of two tracks to feature Ms. Drown – but it perfectly retains its humanity and primal nature, and is still one of the heaviest albums you’ll hear this year.

Though he only did post-production, Tad Doyle’s presence on this album is unmistakable. Every aspect of this record, from the drums to the synthesizers to the occasional guitars, have his trademark style of loud, overwhelming, chaotic sound, while not being trebly and needlessly compressed to the extent where listening through it is an endurance test. It’s an ear-pleasing sort of heaviness, the kind that you can tell had a lot of love and care applied to its post-production.

Take my favorite track on the LP, “Open Wide,” for instance. If this track, which goes from mid-paced to head-splitting at the drop of a hat, was handed off to just any modern rock producer, they likely would’ve compressed it to hell and back, and would’ve rendered the track completely unlistenable. But with Tad behind the board, this track came together immaculately. A razor-sharp electro-rock track with resonant bass, killer drums from Eric Peterson (of Electric Hellfire Club), and the best hook on Blackwing (courtesy of Charlie), “Open Wide” is definitely among the more standout tracks on Blackwing, and is very much deserving of getting single treatment.

It’s easy to draw comparisons when listening to Blackwing – the record’s dark, synth-driven industrial rock-with-electronics nature reminds me a lot of Oneohtrix Point Never’s Garden of Delete, some of the more noisy and electronically-informed tracks recall to mind the more abrasive tracks from fellow locals Youryoungbody, I wouldn’t be surprised if DMN and co. had the Robert Smith-featured Crystal Castles track “Not in Love” on the brain when recording “Hell’s Frozen” – but at the end of the day, bands like Dark Matter Noise and albums like Blackwing don’t come around too often.

Dark Matter Noise are masters when it comes to taking familiar sounds and styles that maybe you could find elsewhere and elevating them to a whole new level of grandiosity and newness. Even if the idea of goth’d-out electronic-driven post-punk doesn’t sound all that appealing to you, there’s enough ambition and songwriting strength on display to win over even the most skeptical of listeners. If Blackwing isn’t enough to launch Dark Matter Noise into the upper echelon of nationally renowned Seattle bands, I don’t know what is.

(Blackwing is available for purchase via Dark Matter Noise’s Bandcamp page digitally for $8, or on physical CD for $9, though it isn’t “officially” released until March 18th. You can also stream the LP via the same location, or stream the title track via SoundCloud below.)