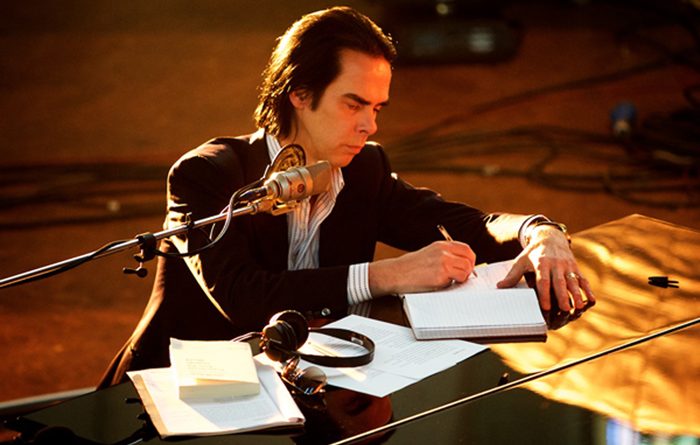 We didn’t know what exactly to expect from Nick Cave’s tour stopping at the Moore but we knew we were very excited to see him on a stage near us. The tour called Conversations with Nick Cave would obviously have both singing and a more personal touch with the discussion part. As we walked into the beautifully lit theater we noticed that the stage was set up with a few round tables seating four people each. They were placed behind Cave’s black piano creating a more intimate feel of the concert/discussion.

As the lights dimmed, Cave’s haunting voice echoed through the PA as part of his spoken-word piece “Steve McQueen” was played. He then appeared, tall and strange, wearing a black suit with a white shirt and as captivating as he could be. He sat down and played “The Ship Song,” and “The Weeping Song,” as people hummed respectfully shifting all their attention on his words. After that the house lights went up and he greeted his audience and prepared them for the night.

This was a show based on the Red Hand Files website that he’s been doing for a year now where he actively interacts with his fans online directly answering questions. He asked that as we all participate in the conversation to suspend our judgement of people and their questions and to put phones away in order to keep identities offline and to fully be present. About three questions in, a man told him that he was at the Portland show but his girlfriend had missed it so they came together to Seattle. The man then asked if he could come up to the stage so he could propose to her, and Cave agreed.

As the night went on the questions seemed a little repetitive but Cave kept answering with calmness and elegance no matter how interesting they got. I don’t know how this could be set up better in order to optimize his time and to navigate from awkward moments but I think that overall it was an interesting night to witness. Cave’s notably past distant persona seemed to be completely stripped as he stood on stage genuinely interacting with people about very personal matters.

It almost felt like he was working as a therapist at times bringing up grief and sorrow as he well understands unfortunately due to the tragic death of his 15-year-old son Arthur in 2015. It’s so incredible to watch someone talk about their loss and notice how it has changed them and how they deal with it. “You never get over it, you learn how to deal with it,” he corrected a fan after she mentioned how his speaking of his loss gave her strength to deal with her own life.

The night went on between him sharing stories, answering questions, having discussions with fans, and singing some of his songs. After a fan asked about Leonard Cohen and his relationship to him, he went on to describe his childhood in Australia and how he always had this feeling of unease which didn’t really align with his upbringing. One day a friend had him come over and listen to the record, Songs of Love and Hate and the moment he heard the first song it gave his feeling a sound and it gave him permission to acknowledge what he felt. He then sat at his piano and played that song for us and it was a beautiful cover of “Avalanche.”

He went into describing the creation of his seventeenth album, Ghosteen, just released with the Bad Seeds. He had a vision before going into the studio and wanted to create what that was. It was all improvised and a lot of it was one take, creating a mysterious element that he’s really proud of. This album is magical and there is a mystical element to it as it touches so many issues humans deal with on a daily basis. No one escapes death, no one escapes pain, and the moment we realize that, the easier we can understand that we’re all in this together.

The three hour event had 14 songs and ended with “Stagger Lee,” and a cover of T.Rex’s “Cosmic Dancer.” I’ll leave you with the words that set mood that were played at the beginning of the night before he even came out.