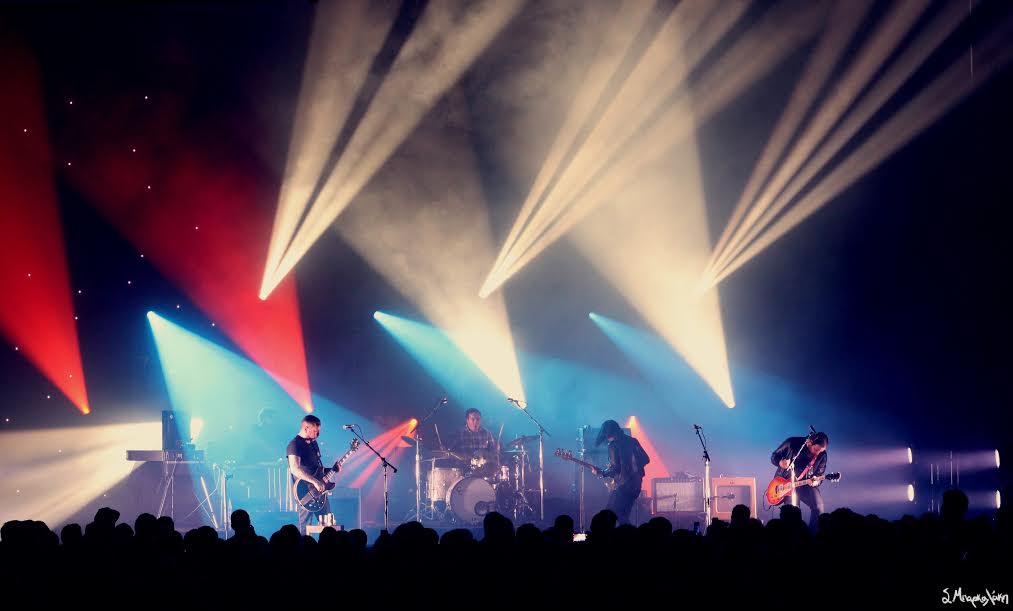 When I got home on Friday afternoon and had time to sit down and actually read all that was going on in Paris, I was still as in shock as many around the world.  I was hearing and seeing things, but they seemed so unreal, so distant, something my mind could not register as true.  I sat on my couch and became more and more depressed as the time passed. “That could be me,” I thought, as I’m at concerts at least twice a week, and have reached 200 shows this year already.

I just couldn’t grasp being in that situation, or any large scale pandemonium. We go about living our daily lives trying not to think of all the bad, but the good that surrounds us. And then something like this happens, and it brings every last hope to a screeching halt. I felt that the couch swallowed me as I became the smallest atom sitting on the planet.

City and Colour was playing at the Paramount, a show that I’ve been waiting for, and it was the last thing I wanted to do.  I was so sad that I couldn’t think of going somewhere and having a good time, it would be wrong. I kept checking the event page to see if it would get cancelled in light of the tragic news. When the time got closer and I had to make a decision, I thought, “This is my life, I love music, and that’s how I’m going to support this.”

It was the first time that I walked into a venue and checked the Exit signs around me; it was completely done subconsciously. This is where a lot of people come to escape reality, to be lost in the music, to feel safe from the outside. A place where everyone is united through music, an artist that expresses everything you’ve wanted to say, your translator of emotions. A place that  should not, in any way, be a symbol of fear, chaos, despair, grief, and terror.

In a way, each of us were here to prove that we still believed in this place, that this unity was stronger than all of us, and this was our way of showing support. The theater was charged with tension, but as soon as Dallas Green stepped on stage it started to dissipate slowly as his words rushed through our minds and hearts, filling them with hope once again.  You could tell that he was just as upset as the rest of us, and he thanked us for being there. “We do this every day, going from place to place playing music, I can’t believe this happened.”

His set started with “Woman,” and as I began to get lost behind my lens for those first three songs, I started to feel bigger again. He went on to play “Northern Blues,”  “Wasted Love,” and “If I Should Go Before You” from his new record by the same name.  He looked out in the crowd and said, “This next one is for my parents,” and  continued with “Grand Optimist.”  His set included some of my favorites – “Sleeping Sickness”, “Hello, I’m in Delaware”, “As Much as I Ever Could” – before he stepped away for the encore.

The name City and Colour comes from his own, Dallas- a city, and Green- a colour, which makes it interesting.  Green is an amazing persona and a very talented musician. He had his whiskey and Coors Light on a stool next to him, taking a sip when he needed a drink. His voice was flawless; he sounded better live than any record I’ve heard him release.  It’s always a joy when you hear someone for the first time live and you like them even more than before.

He came back for the encore, stood alone on stage without his band, and mentioned the attacks again, as he couldn’t believe they had happened either. As he was struggling for words to express his emotions, he just said it straight: “When something like this happens, it just fucks you up.”  He thanked us again for being there, and adjusted the harmonica around his neck to play “Body In a Box.”  Before he went into “Northern Wind,” he said, “This next one is about trying to be nice to each other.”

What I noticed was that with every song he sang during his encore, the crowd would cheer more and more and the next one would be even louder. “The Girl” is a fan favorite, and he started solo for the first chorus and his band came out and joined him for the latter half.  The night ended with “Hope For No,w, and that’s what stuck with me. “What if I could sing, just one song, and it might save somebody’s life.” The show didn’t erase the horrible things that had happened, but it showed that our love for music and life was stronger than fear.

Posted by S.Barkalakis on Sunday, 15 November 2015