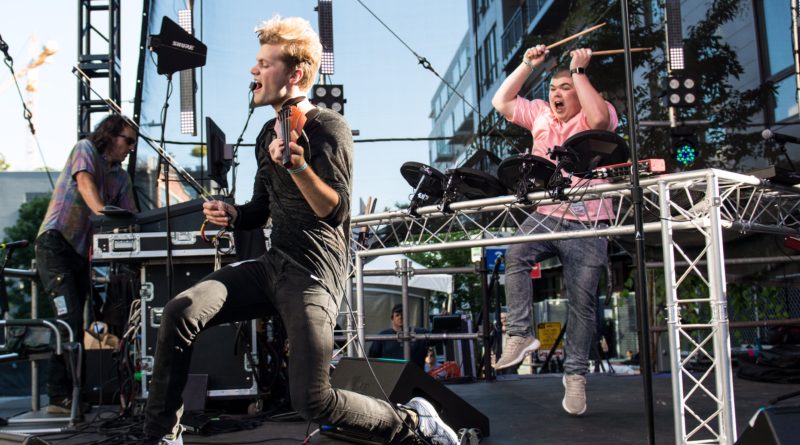 Capitol Hill Block Party is one of the most underrated festivals in Seattle. Trying to thrive under Bumbershoot’s shadow, it almost feels as if the majority of people who hear the name quickly assume it’s just a regular block party rather than a cutting-edge music-ﬁlled festival weekend. Taking place in the hipster center of Seattle, Capitol Hill, the earlier time slots of the weekend are usually ﬁlled with a variety of smaller, mostly local bands, only to eventually wind up to some big global headliners.

With around ﬁve or six stages, and decently short breaks between sets, you just have to go into the weekend accepting the fact that you’re not going to see everyone you want to, that’s just how festivals are. So Friday we started the day off with the tail-end of Noname’s set, watching her carelessly walk around the stage as the crowd sang along with her. Kyle Craft was up next on the Vera Stage, one of the smaller performance spaces. I went into Kyle Craft’s performance not knowing what to expect, as I’d never listened to them, but was quickly blown away. A little Portland band with a bit of a classic/retro vibe to their music and lead singer Kyle’s “abrasively loud voice,” the band’s performance is exciting and keeps you hooked with clever lyrics.

Vera Stage was followed by Flor, a cute little indie band with a name that perfectly ﬁts their light, airy pop tunes. I actually saw these guys in March opening for Hayley Kiyoko and fell in love, because who doesn’t need more indie-pop in their life? Their CHBP performance was well suited for the warm air and summer sun, and their set has only gotten better in the past few months.

As the instrumental for Mura Masa’s “Lovesick” played on Main Stage at 7:45, the crowd pushed forward with screams, more than ready to bop around to his fun tracks. Mura Masa’s set actually ended up being my favorite of the whole weekend by far. While he has a few mildly well-known tracks that the crowd seemed to be familiar with, most of his set consisted of newer tracks from his latest release. And the set was a perfect mix of party tracks and more laid back ones, never leaving you bored wondering when the next one would be up. “Lotus Eater,” my favorite recorded track of his, also proved to hold up well in the festival setting.

While still in his top 10 on Spotify, the song tends to be a bit over shadowed by tracks that feature bigger names like A$AP Rocky, Charli XCX, or even just tracks that have more than one word in them. However, the bass drop in “Lotus Eater” is one that remained unparalleled for the rest of the weekend. By the time the crowd caught on later in the track, I guess you could only describe Mura Masa’s set the way many snapchats were surely captioned: “Lit”

Sticking around Main Stage for the rest of the night, the last set before Friday’s headliners was Wolf Parade. Singed by Modest Mouse’s Isaac Brock, there are clearly a lot of similarities between the two groups in terms of their general music style. Wolf Parade’s set was an interesting switch after Mura Masa. As the glitter covered teens pushed back through the crowd to rehydrate, groups of older fans pushed forward towards the band to rock out to the familiar tunes. And ﬁnally to close out Friday night, modern hip hop super-duo Run the Jewels closed out the night with one of the weekend’s most hyped-up performances, thousands of fans eagerly shouting along.

Day two was a short day for me and kicked off with Manatee Commune, an artist from Bellingham that puts together some of the best summery tracks around. I caught Manatee Commune for the ﬁrst time at Bumbershoot 2016, fell in love, have seen him quite a few times since, and each performance reminds me why I love him so much. Playing to a sizable Main Stage crowd at block party this year, it was all smiles and bright little tracks. “What We’ve Got” will always be a highlight, and with blowup manatees getting bumped around on top of the crowd, his set was just as, if not more, fun than any of the pictures make it out to be.

Next up was Saint Claire on Vera Stage. From the looks of it, the duo has some odd Lindsey Stirling thing going on with one member with a laptop and percussion pads, and the frontman with an electric violin and a mic. Their set was incredible though, focusing more on the vocals, but mixing in the violin just enough, it creates a really nice mix. Coupled with their energetic and passionate performance, Saint Claire was hands down my day 2 favorite, and fully deserved the big crowd he brought in.

Frankly, I’m not sure how Snakehips didn’t get a later or longer Main Stage set on Sunday. With a handful of radio-pop hits featuring big names, his set was pretty hyped up as it was perfect for the festival setting. And though I only caught the end of his set, it was evident pretty quickly how into it the crowd was, especially as the set closed with “Don’t Leave” and “All My Friends.” The next set I caught was Mykki Blanco on Vera Stage. Going into this one without listening beforehand was probably the most surprising moment of the weekend. While containing elements of a drag perfomance, Blanco performed her rap songs with a burning passion, the crowd eating it up quickly. While performing on the stage provided is pretty much a given, Blanco is essentially anything but stereotypical, so the majority of her performance took place in the middle of a circle the crowd had pushed out to create on the ground. If nothing else, her performance was incredibly enticing, and I’m deﬁnitely glad I stumbled into it last minute to catch something that unique.

Next up was a bit of Angel Olsen’s performance. Atmospheric and ethereal, Olsen’s voice seems to take the best parts of something like Lana Del Ray, but combine it with a sound that’s more retro-indie sounding, creating just the right aesthetic for all the funky sunglasses and weed in the crowd. Growing up against raging homophobia in Everett, Mike Hadras’ (aka Perfume Genius) difﬁcult childhood lead to some of the most beautifully honest music at the festival. Most of the songs feature a pretty delicate opening with a pretty shy performance to match. That is, until a big, full bass drop leading into some great dance moves and probably many tears from the crowd.

Headlining and closing out the whole festival, Diplo, one of the big names from pop-cultures recent wave of electronic music popularity. His set deﬁnitely brought in the most people the weekend saw, packing in the street pretty thick for two blocks or so. With a set of perfect dance songs and a crowd ready for it, Diplo was worth the hype and a great closer for the festival this year.

Overall, Capitol Hill Block Party pulled through with another great year of locals and big names. And while those popular acts proved that they’ve earned the slot they’ve been granted, a lot of the smaller names are performances I wouldn’t be surprised to see with later Main Stage slots in the following years.