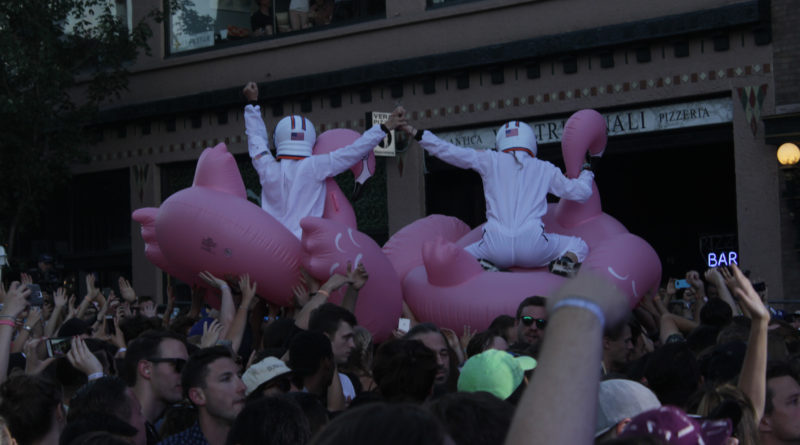 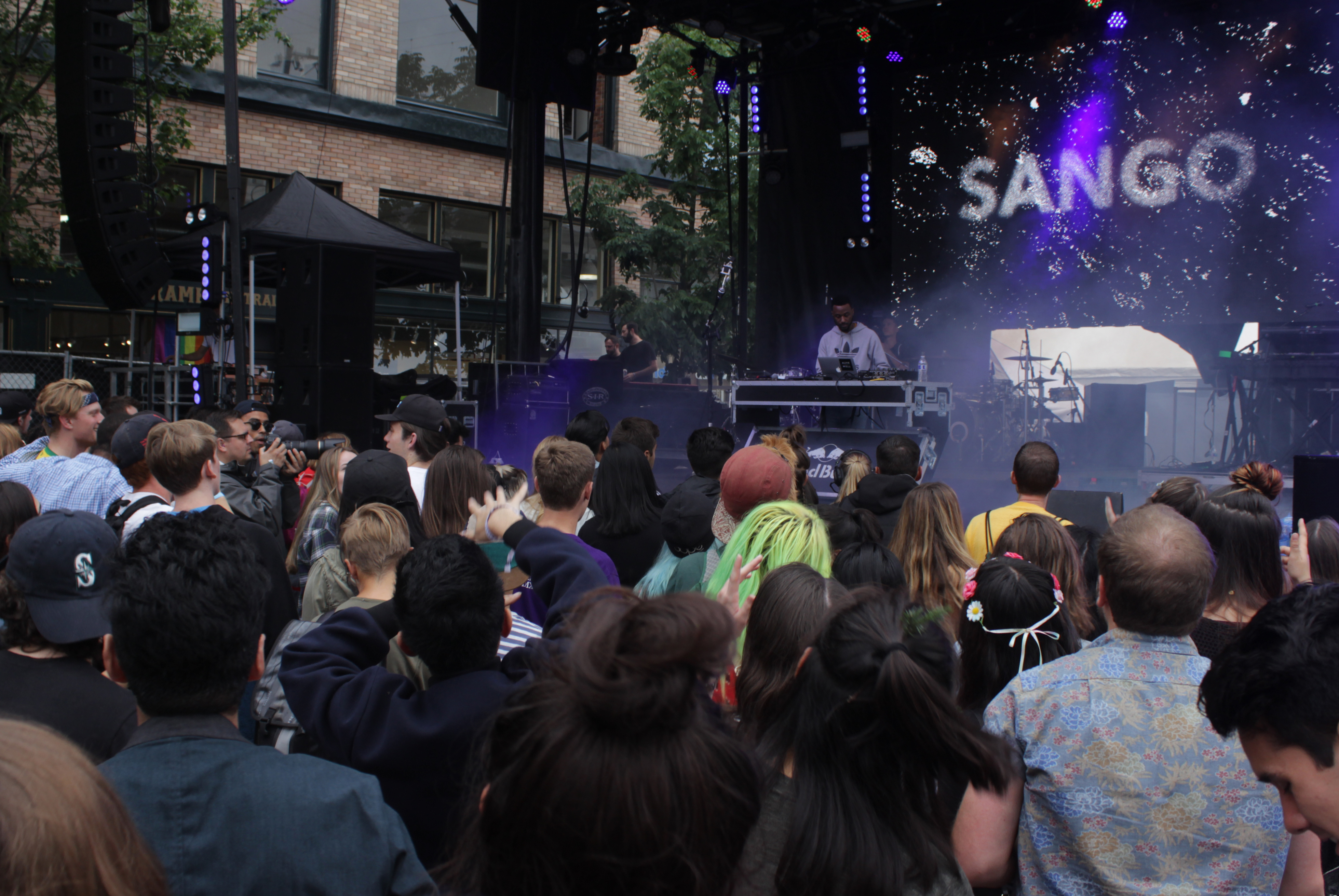 (All photos by Jess Casebeer.)

The 20th annual Capitol Hill Block Party came and went this past weekend, once again sectioning off a good portion of Capitol Hill for three days of contemporary music, both local and beyond. For 2016’s star-studded weekend, we thought we’d change things up by recapping the festival from the points of view of two different contributors, one newcomer and one returning annual attendee, to give an idea of the sort of variety one can expect from a festival as vast as Capitol Hill Block Party.

If you asked me to sum up the 20th annual Capitol Hill Block Party in two words, it would probably be, “vibes, man.” While 2015 did have some laid-back head-nodding artists like Diiv and Toro y Moi headlining its main stage, it also had the occasional high-octane, shit-losing artist like The Kills or Flatbush Zombies to balance the books. Meanwhile, just about all of 2016’s main stage acts definitely sat on the more pleasant side of things, giving this year’s outing more of a, well, party vibe than any of its outings I’ve been to in the past.

Seattle indie-soul outfit The Dip and summer-pop act Pillar Point helped Friday kick things off on the right track. Though the former’s main stage-opening performance wasn’t the sort of barnburner the growing crowd seemed eager for, their horn-embellished songs, topped with vocals from Beat Connection’s Tom Eddy, made for a nice warm-up for what was to come. Meanwhile, Pillar Point continues to be a Seattle fan favorite, with his gauzy pop setting the perfect mood for a summer afternoon spent outdoors.

The Vera Project stage was where most of the high-octane artists resided. While bands like Iska Dhaaf and Dilly Dally were satisfying the crowd’s more primal, animalistic urges, those glued to the main stage got more danceable flavors of music in the form of Sango, the king of Brazilian trap, and the Emancipator Ensemble. Sango’s set offered up some interesting remixes of popular songs, worked into his well-established style of exotic hip-hop production, with a surprise guest appearance from Seattle’s Dave B (with whom he collaborative on a full-length record, Tomorrow). The Emancipator Ensemble never disappoints, filling the block with their cascading live instrumentation and ice-cold synth flourishes.

Crystal Castles were among my most-anticipated artists of the whole Block Party. I still maintain that their first two self-titled records are untouchable, and the tracks teasing their upcoming fourth album, Amnesty (I) have ranged from not-that-remarkable to good, even if new singer Edith Frances has about as much chemistry with Ethan’s trademark darkened production on the new songs as Liz Fraser singing angelically over a Suicide track. As someone who never caught them with their beloved original lineup, I was able to forgive Edith reading like a poor, 30-dpi scan of the duo’s previous frontwoman, Alice Glass, so long as the duo’s live performance was good. Luckily, Crystal Castles (at least mostly) didn’t disappoint.

The duo went full jukebox mode for their CHBP performance, mostly with their best hits off (I) and (II) – “Baptism,” “Crimewave,” “Not in Love,” “Celestica” – as well as newer singles like “Concrete,” which opened their set. As a live performer, Edith had little in the way of stage charisma beyond “just do what Alice used to do,” but she held her own as a singer, sounding pretty good over both sides of the hardness spectrum. The Amnesty (I) songs sounded a lot better live, with Edith’s vocals more impassioned and more upfront in the mix than the studio versions. Intense technical difficulties meant a 10-minute delay in the middle of their set, as well as the vocals being so quiet on later tracks like “Not in Love” that the songs just about felt instrumental, but those issues aside, I had fun at their live set, and I walked away from it pretty hopeful for Amnesty (I).

Saturday struck me ahead of the festival as being the least interesting day of all, and the day as a whole met my expectations. Everyone’s current favorite forced indie darling, Car Seat Headrest, was the last rock band to take the stage before it would be taken over by three electronic artists in a row, playing his Baby’s First Quarter-Life Crisis sing-alongs to a mostly stagnant crowd. The UK’s Tourist fared a little better, with a set of atmospheric deep house music, which got the crowd to move various parts of their body, even if the set did feel like he was stretching about 20 minutes’ worth of ideas out for a full hour of occasionally redundant four-to-the-floor bliss.

Big Wild was among the bigger surprises of the weekend for me. I caught his Vera Project Stage performance at last year’s Block Party, and while it wasn’t awful, it wasn’t the sort of performance I walked away from completely blown away, thinking that it should’ve instead been on the biggest stage there. Something about the sound of Big Wild’s set felt right at home on the main stage, though. Its sound was vast, the songs were slow-moving, but the set flowed and was paced very nicely, and when it came time to get the audience moving, sole member Jackson didn’t hold anything back. I was initially confused at the Block Party’s decision to book Big Wild two years in a row, but I can’t say I was let down by his strikingly good performance.

Really, though, the whole day was just one big build-up until ODESZA finished off the night. Like many other people (whom I’m sure also recount the memory with an insufferably smug tone), my first introduction to the Seattle duo was at Capitol Hill Block Party two years prior, when they performed a pretty minimal and quaint live set right before Matt & Kim. Little did people know that in just a few months, their breakout record In Return, and more specifically its lead single “Say My Name,” would skyrocket the duo into immeasurable fame in the world of mainstream electronic music.

Now, two short years later, ODESZA returned to the Block Party more popular than ever, even bringing a full horn section along for the ride. As Mills and Knight ran through some of their most cherished pieces, including their warped takes on Slow Magic’s “Waited 4 U” and ZHU’s “Faded,” they were joined by various guests, including previous performer Tom Eddy, as well as even the Seahawks’ drumline, Blue Thunder, who joined them for a handful of cuts, most notably “Say My Name,” which, I don’t think a more Seattle happening has ever happened: ODESZA performing at the Capitol Hill Block Party, accompanied by Blue Thunder. It probably could’ve only been more Seattle if they were all wearing flannel shirts and were tossing Starbucks out to the sardine-packed audience.

Sunday of Capitol Hill Block Party stood out to me as the day of one cancelled and rebooked main stage performance after another. NAO, Mick Jenkins, and GoldLink were all cancelled at the last minute, and were quickly replaced by Maiah Manser, Clams Casino, and Dave B, respectively. GoldLink’s performance in particular was seemingly cancelled the day-of, and his immediate replacement by Dave B was so unexpected that less in-the-know people that stuck around for his main stage performance seemed to just kind of figure Dave was GoldLink. I think the jarring and rushed feel of the last-minute change left a lot of the crowd cold towards Dave B’s performance, which is a shame, because he really put his back into it, and I quite enjoyed what he had to offer.

The decision to replace Mick Jenkins with Clams Casino was a decision that I can only assume was administered from an all-loving god above. I look at much of Clams’ discography the same way grooms tearfully look at their brides after walking down the aisle, and getting to hear songs of his live that I didn’t expect him to play in a million years filled me with almost embarrassingly giddy feelings. Songs like the Vince Staples-featured “All Nite,” “Witness,” and the legendary “I’m God” were givens, but “All I Need,” “Brainwash By London,” “Illest Alive,” these are career-defining songs, and getting to hear them all in rapid succession with little to no dud moments was fantastic.

As Sunday evening started to wind down, Portland’s STRFKR and their posse of spacesuit-adorned astronauts took to the main stage to sweep the award for “Most Awesomely Over-the-Top Performance of the Block Party.” Opening their set with “Boy Toy” off their Jupiter LP, their set took a little while to get started, but once it did, the crowd didn’t stop moving, and the band always seemed to have something up their sleeves. With a set that contained all their best hits (“German Love,” “Pop Song,” “Leave It All Behind” closing out the performance), and later bringing out the inflatable pink flamingos for a couple astronauts to crowd-surf on, there was nary a dull moment during the hour or so their set lasted.

Famed Glasgow indietronica trio CHVRCHES closed out the 20th Block Party. A dimming of the lights and slow fade-out of the intermission DJ’s music was met with piercing white strobe lights and warm blue spotlights as the crowd tension grew and grew, knowing Lauren Mayberry and co. were just an icy, seemingly endless breath away. All was relieved as the members began to file onto the stage one by one, getting ready to work their magic as the opening synth stabs of “Never Ending Circles” throbbed through the speakers. Mayberry’s somewhat shy, but endearing vocals rang through the pulsating synthesizers and meaty low-end, as she alternated between her two standing platforms, never staying in one place for too long.

I’d heard some pretty mixed opinions towards their The Bones of What You Believe-era live performances, saying that Lauren Mayberry’s stage presence was stilted and uncomfortable, but I think whatever stiffness there may have been before has since been shed, since Mayberry most definitely stole the show. The trio belted their way through one winner after another, playing crowd and radio favorites (“Recover,” “Leave a Trace,” “The Mother We Share”) and some unexpected, but welcomed left hooks, like “Science/Visions,” one of the least conventional tracks off Bones. Mayberry and co. thanked the audience for coming out on a handful of occasions, and exchanging the occasional quip, like Lauren’s unexpected Rule 34 joke towards the beginning of their set. It was definitely one of the most unanimously-adored performances all festival; even the security guards around me were singing along to their biggest hits like “Recover.”

While I’m sure the 2016 Capitol Hill Block Party wasn’t well-loved by everybody – compared to 2015, there weren’t any legacy acts like Built to Spill this year to draw an older crowd, and there were noticeably fewer bleeding-edge indie darlings like Father John Misty and Jamie xx than there were last year – but if you’re just looking for a good time surrounded by like-minded music fans, Capitol Hill Block Party is still one of the best festivals around. This year’s lineup was clearly curated to be their most consistent and straightforward outing they’ve had to date, and while this attention to uniformity did lead to the occasional dull moment, I’m still looking forward to seeing what Capitol Hill Block Party 2017 has to offer.

This piece was a collaborative effort between Jess Casebeer and Lulu Dawson.