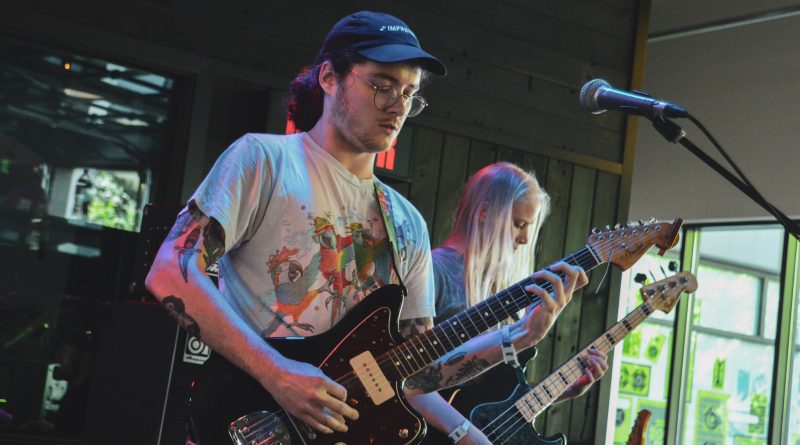 I distinctly remember the morning that I viewed the Bumbershoot 2018 lineup for the first time. My eyes flicked over the largest names on my phone, the headliners, and I immediately felt a sharp pang of disappointment. As I glazed over the entire lineup, I could literally count the number of artists that I felt genuine excitement to see on one hand. Anger and frustration flooded through my system, and I vowed to stay far away from the Seattle Center on Labor Day Weekend.

Flash forward a couple months, where do I find myself on August 31st? You guessed it, in line to enter Bumbershoot for the first time. Friday, the first day of the festival, was a bit of a mixed bag when it came to its schedule. Firstly, I absorbed a wacky but wonderful set from Hobo Johnson and the Lovemakers, whose scattered yet endearing performance turned out to be a good metaphor for the rest of the day. Heading over to the main stage directly after, I was shocked to see viral sensation Bhad Bhabie — also known as Danielle Bregoli, the “cash me ousside” girl — spitting hard-hitting rap music to thousands of teenagers, who were simply eating up every aspect of her show. Though at first entertaining, the meme of it wore off when Bregoli started yelling something about how “you hoes wear Fashion Nova even though Fashion Nova don’t even sponsor y’all,” and I promptly decided to leave.

After having a bit of a fangirl moment as I discovered that I was sitting a foot away from Hobo Johnson himself through the entirety of Knox Fortune’s irresistibly catchy act and being consciously wooed by the spacey indie R&B sounds of Moses Sumney while lounging in the grass, I took in 20 minutes of Lil Wayne’s underwhelming but mildly humorous set before deciding to head home before I had to hear a single second of The Chainsmokers’ music, which closed my Friday out on a casual yet cheery note.

Saturday’s lineup was strangely full of bland white rappers and incredible female-fronted rock bands. I was thoroughly unimpressed with both Jack Harlow and Yung Pinch, both of whom had similarly boring stage presences, unoriginal beats and mediocre flows. Though it started on a bad note, my day quickly turned around after viewing a powerful and distinctive set by indie rock three piece Skating Polly, and local favorite Travis Thompson, who put my disdain towards white rappers at a screeching halt thanks to his musical creativity, raw energy and enthusiastic crowd. Cherry Glazerr won a huge crowd over at the Mural Amphitheatre, and after viewing their goofy stage presence, killer guitar chops, and overall badassery, their dedicated fanbase comes as no surprise to me.

After indulging in a Daft Punk laser show over at the Science Center, Saturday night came to an astounding close with musical legends The Revolution, who performed a handful of the recently deceased Prince’s best work, from “Raspberry Beret” to an emotional rendition of “Purple Rain.” It was incredible to see older dedicated Prince fans, a choice few members of the younger generation, and even the security guards break out of their shell and dance the night away to the iconic music that Prince left as his legacy.

My Sunday began with my favorite new discovery of the entire weekend, that being Seattle’s own Great Grandpa. Their passionate and heartbreaking indie rock instrumentals and captivating melodies made everyone in the KEXP listening space shut up and listen, and caused me to download their album as soon as I got home the next day. In a similar style, Los Angeles punk rockers The Regrettes took KEXP by storm, encouraging moshing, crowd surfing, and a wall of death within the confines of the little stage area there was. Bumbershoot then wrapped itself up with a strong foot forward, with Blondie showing up in a glow in the dark wig to play the greatest hits of Debbie Harry and company, to the delight of lots of attendees in their 50’s, but even more to the drunk 25 year-olds, who screamed and danced to “Call Me” like there was no tomorrow.

While SZA belted her heart out on the main stage, I chose to attend the set of indie pop veterans Phoenix, which turned out to be the best show of the day without question. Though the French five-piece have been around for quite awhile, their recent music remains ahead of the curve, and to be quite frank, blows most current indie pop completely out of the water. Recent singles such as “J-Boy” and “Tutti Frutti” translated beautifully into a live setting, but old favorites such as “Lisztomania” and “1901” reaped some of the loudest and most excited screams that I heard the entire weekend.

Despite my ongoing pessimism within the time leading up to the festival, I learned an important lesson this past weekend: Bumbershoot, and I’m sure any other modern music festival for that matter, was exactly what I made of it. I could have definitely sat in the bleachers of the main stage for hours on end, grumbling about how millennials ruined what Bumbershoot ‘used to be’ and critiquing every aspect of the event from front to back. However, I used the opportunity of an at, first glance, underwhelming lineup, to discover new artists, participate in the many activities that Bumbershoot has to offer, and genuinely have a good time.

(You can check out more photos from the event here.)