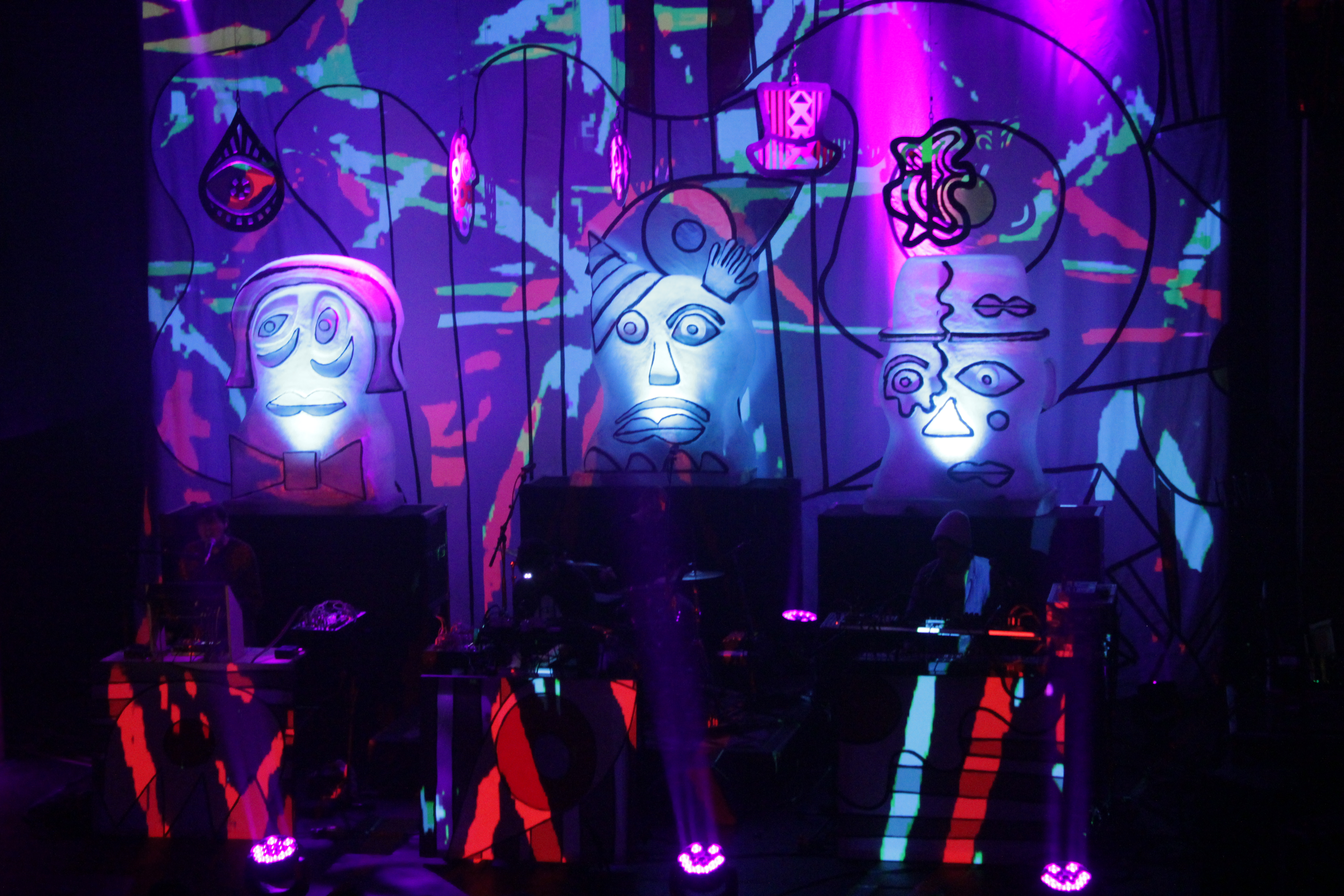 All along 45th Street, what seemed like thousands of colorfully-adorned music fans waited in shared anticipation in the soft, icy rain to be a part of the live Animal Collective experience. The teenagers standing behind me lamented having to sit on the wet brick, while the older folks in front of me, whose outfits ranged from Hot Topic-goth-circa-2006 to inspired-by-Wonder Bread-packaging, mused on what the best AnCo release is, and ultimately concluded that it’s “not Centipede Hz.”

Beloved neo-psychedelia outfit Animal Collective took to the sold-out Neptune Theatre on Friday night in support of Painting With, the group’s latest record. Given how whacked-out and inspiringly creative AnCo’s music is, those in the audience that had never seen the band live before (myself included) knew to expect a performance unmatched in its audio-visual mind-fuckery, a notion accentuated by the stage design, in which odd shapes hung from the ceiling in front of what looked like Styrofoam effigies of polymelia victims. We all knew we were in for a night that would leave us with our melted brains slowly leaking from our earholes.

NYC alternative hip-hop outfit Ratking opened up the night, giving the quickly-expanding crowd a bit of an energy jolt before the main event. With little stage accompaniment outside of a projection screen showcasing abstract imagery, the trio filed onto the stage, and went straight into their hard-nosed, eccentric brand of hip-hop. Wiki took center stage, while Hak and Sporting Life stayed more off to the side, DJing/providing visuals and beefing up the live sound via percussion pad, respectively. Their live performance was characteristically harsh, and their live production seemed to have more bite than it does on record, thanks in part to the snare hits and other pieces of percussive accompaniment provided by Sporting Life’s sampling pad.

Most of their set consisted of cuts from their full-length debut, So It Goes, turned up for an antsy and restless audience. Though Wiki’s stage presence was a little subdued and still when compared to the music, his delivery was passionate, and he and the other members seemed to have a lot of fun performing for the crowd. Though the audience response was a little mild when compared to the main event, the trio’s live rendition of their pretty solid “Fall in Love” remix was met with a decent reception. While I probably would’ve rather seen Ratking in a smaller venue with a less blasé crowd, they were a fun and worthwhile opener, even as their equipment fucked up and Wiki was forced to freestyle while technical difficulties were tended to.

There’s something special about being in a bustling, packed crowd as the clock is ticking down to one of your favorite bands’ performance, your heart beating faster and faster by the passing minute, when suddenly, the venue goes pitch black, you’re screaming your lungs out in a sea of screaming fans, and the members file onto the stage just slowly enough to make tension that much higher. As 10:15 rolled around, Animal Collective appeared before the crowd Geologist-first, taking positions behind their equipment-loaded podiums as the stage was spontaneously lit up with blazing red and white patterns. The air in the theatre was quickly filled by the band’s signature weird sounds, with Panda Bear and Avey Tare’s loud vocals felt all throughout the Neptune.

Painting With’s tracklist seemed to make up a bulk of the band’s live set, and even though that album seemed to have received a mixed reception from fans and critics, in the live setting, fans swooned upon hearing these songs recreated live. Whether it was winning lead singles “Golden Gal” and “FloriDada,” or deeper cuts like “Recycling” and “The Burglars,” the finish of each song ended in a deafening applause from the completely packed-out venue. A surprisingly loud performance for AnCo, squelching synths and programming were matched with weird negative feedback and killer live drums.

Animal Collective’s music has always been notable for its playful and non-self-serious approach to experimental psychedelic music, and their live performance perfectly sold that exuberant attitude. On stage, Avey and Panda Bear are very animated when they perform, even if it may be hard to tell with the crazy and haphazard visual accompaniment they had. No matter where you were in that venue, the show was a sight to behold. Eye-popping projections that seemed to be changing with every song painted the stage and members, while colored spotlights pointed at the ceiling waved all around and helped make the show visually overwhelming in the best way.

There was something enlightening about being in the Neptune on Friday night. The feel of the night was very social and mutual in its adoration of what they were a part of. The Neptune Theatre almost felt like it was happening on a different plane of existence entirely; it was almost too good and too otherworldly to be happening on earth. As a theatre full of people all collectively bobbed their heads side to side, taking in the sounds of one of the most idiosyncratic groups around, it was hard not to feel giddy and joyous, as you were being elevated to a different, altered, better state of mind.

Photos taken from Animal Collective’s performance at the Neptune Theatre in Seattle on March 4th, 2016.