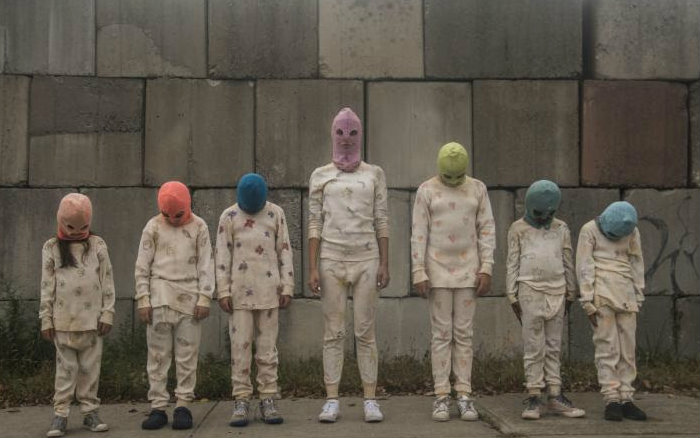 Pussy Riot is a Russian feminist protest punk rock group based in Moscow. Founded in August 2011, it had a variable membership of approximately 11 women ranging in age from about 20 to 33.  The group staged unauthorized provocative guerrilla performances in public places, performances that were filmed as music videos and posted on the Internet. The collective’s lyrical themes included feminism, LGBT rights, and opposition to Russian President Vladimir Putin, whom the group considered to be a dictator. These themes also encompassed Putin’s links to the leadership of the Russian Orthodox Church.

The group gained global notoriety when five members of the group staged a performance inside Moscow’s Cathedral of Christ the Savior in 2012. The group’s actions were condemned as sacrilegious by the Orthodox clergy and eventually stopped by church security officials. The women said their protest was directed at the Orthodox Church leaders’ support for Putin during his election campaign. On March 3, 2012, two of the group members, Nadezhda Tolokonnikova and Maria Alyokhina, were arrested and charged with hooliganism. A third member, Yekaterina Samutsevich, was arrested on March 16. Denied bail, they were held in custody until their trial began in late July. On August 17, 2012, the three members were convicted of “hooliganism motivated by religious hatred”, and each was sentenced to two years’ imprisonment. On October 10, following an appeal, Samutsevich was freed on probation and her sentence suspended. The sentences of the other two women were upheld.

Check out our 2017 interview with Maria Alyokhina (Masha) HERE.

The group will be playing at Chop Suey in Seattle on March 22 and The Vera Project on the following day.

Pussy Riot is going to rally in a couple of other cities as well:

Check out the new track from Pussy Riot below and a word from the band:

“Hey comrades. Hope you are not going to like our new track, since it’s dedicated to really disgusting things. Hope you will turn it off, go out and act.

We’re sort of confused about the fact that the most of songs we hear are circling around romantic feelings and friday parties, although only rare tracks are dedicated to not less important topics such as a) climate change, b) gun control, c) arrests of political activists, d) structural inequality e) sexism f) killer cops, brutality and abuse of power that state institutions commit on a daily basis g) urgent need of good-quality accessible healthcare and education.

Mediazona, our activist media agency, posts news that you’d rather not read – endless criminal cases for reposts and for participation in rallies, brutal tortures of our fellow activists in secret FSB prisons, kidnapping and beatings of gay people in Chechnya, murders of Kremlin’s opponents. State violence that we’re forced to experience and think about every day. That’s why almost all our our tracks are about bad apples.”