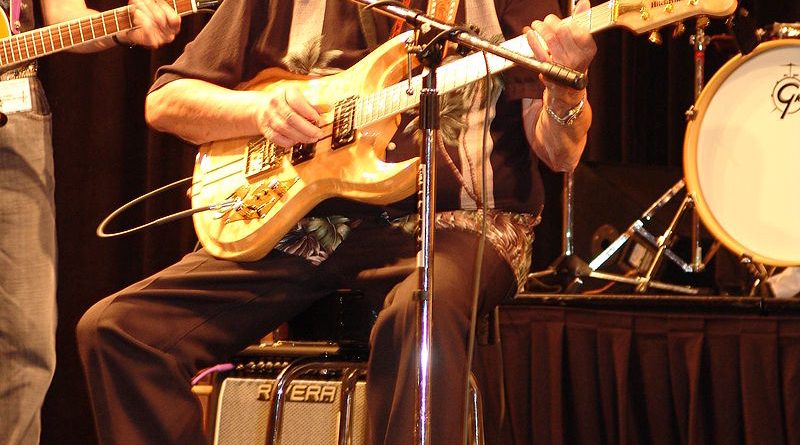 Rock and Roll Hall of Fame member Nokie Edwards best known as lead-guitarist of The Ventures passed away today at the age of 82.

We have been advised this morning that Nokie Edwards passed away today after several months battling an infection after hip surgery this past December. The Ventures family feels this loss very deeply: Nokie has been part of the Ventures’ history for almost 6 decades and helped to shape the early Ventures’ sound and the success of their career. He was an innovator and one of the greats on guitar, so much so that he influenced many young players over the course of his career. Born in Lahoma, Oklahoma with Cherokee roots, he found his way to Washington State where he met Bob Bogle and Don Wilson and began playing and recording with The Ventures, initially on bass (because Bob was playing lead) but eventually taking over as lead guitarist for the group. Nokie’s many accomplishments include composing and his song, Ginza Lights (Futari No Ginza) was one of the first of the Ventures’ Japanese hits – and is still a standard in Japan. Our thoughts and prayers go out to Nokie’s wife, Judy, and all family members, friends and fans. His music will live on.

In 2008, Edwards was inducted into The Rock and Roll Hall of Fame along with The Ventures. The award was presented by John Fogerty. The band performed their biggest hits, “Walk Don’t Run” and “Hawaii Five-0”, augmented on the latter by Rock and Roll Hall Of Fame musical director Paul Shaffer and his band.

Aside from music, Edwards had a role on the Deadwood an American western drama where he played the mysterious friend of Wild Bill Hickok.