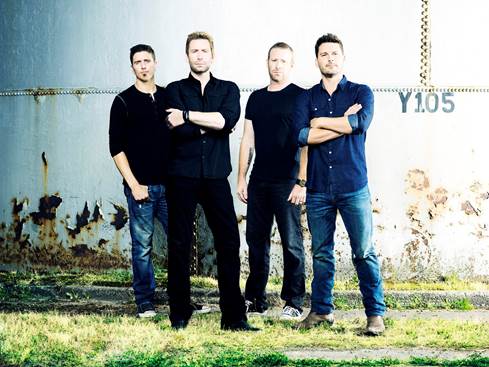 For a lot of us being able to laugh at ourselves and not take ourselves too seriously is a vital part of our makeup. But what about being in one of the biggest and arguably most hated bands on the planet? If you are in Nickelback I think you’d have to pretty much take 95% of what is written about you with a grain of salt and laugh about it. It would drive you bat-shit crazy if you didn’t. Plus, if everyone hated them how could they have sold 50 million records world wide?

Mike Kroeger, one of the founding members of Nickelback and brother to frontman Chad has a positive outlook on the status of the band.  He maintains that the majority of fans like them but that the minority can be louder, especially on the internet. And like he says, he still hasn’t had someone ever come up to him and tell him to his face that his band sucks. He says that only happens on a keyboard, on the internet.

We recently got a chance to catch up to Mike Kroeger, the bass player for the band that has spurred such furious debate on the internet about who the worst band ever is. Well, we can assure you one thing, it ain’t Nickelback. Sure, they aren’t going to battle bands like Led Zeppelin, Pink Floyd and the like for the crown of best band ever but maybe they aren’t trying to. Maybe they are just out there having fun, certainly no crime in that. In fact Mike says so himself and he realizes the place that NB holds in the music world. He’s also very comfortable with what they have accomplished and is in fact able to laugh at the critics(some of whom probably secretly like the band).

Here’s our interview and since he’s from Canada we had to ask this question:

MK: “Neither. They’re both just terrible. That’s not to say that I’m not proud of Canada – I love Canada – but I find most of the beer that people in Canada drink to be borderline undrinkable. The craft beer revolution has begun. There’s over a thousand craft breweries in Canada now, and it’s coming up huge, and I think it’s about time.”

NWMS: “I am not a Nickelback hater, and I don’t really understand that whole culture. I mean, Nickelback isn’t exactly Led Zeppelin for me, but…”

MK: “Me neither. *laughs* We’re not Led Zeppelin to me either, or any of us for that matter.”

NWMS: “What do you think makes Nickelback so popular and unpopular at the same time?”

MK: “Probably it’s just that people like it, and that’s something that can be both popular and unpopular. As you well know, when things get to a certain point of magnitude when everybody knows about it, there are three ways that everyone can look at it: There are the lovers, the haters, and then there’s everybody else, the people who just don’t care either way, who seem to make up a bulk of our population. I find that the lovers are a small portion of our population, and our haters are a minute part of our population, but they happen to be the loudest.”

NWMS: “Do you think part of it is that you’re a rock band that drew in a pop following?”

MK: “I don’t know. I call that the Metallica syndrome, where they were the hardcores who refused to make videos for so many years, and then suddenly they release “Enter Sandman” and it turns into an almost pop-rock song, it was so huge, and they got fucking criticized for ‘selling out’ when they just wrote a song, they didn’t make it be huge, people just really like it. I’m not sure if it’s what you’re describing, I think it’s just more a case of when it happened to Bieber and One Direction, when basically the biggest things in the world get slammed by the vocal minority. The hatersphere comes alive when something becomes successful, they hate that.”

NWMS: “What do you think about Kanye West? Everybody’s on him right now too? ?”

MK: “You know, I don’t disagree with everything he says, I do find him to be rather humorous, because I find him to be actually funny. The context can be manipulated, right? So I read a quote of his, and I actually used it for the signature part of my emails for a while because I thought it was so profoundly great, and it said that his biggest regret in life is that he will ever be able to see himself perform live. That’s like Monty Python shit to me, that’s awesome. People can say all sorts of things about that, but it’s a very Kardashian-esque way of achieving attention, but that’s the game that they’re in: Capture people’s attention, hold their attention, whether it’s with positivity or negativity, doesn’t matter, just hold the spotlight on yourself. People dig that shit, man.”

MK: “We have a very small team of professionals now – we’ve never really done that whole PR machine thing before – and we have a team of people who try to help us to not get into too much trouble now. We never have in the past. It’s just something we haven’t ever considered doing, ‘cos we always figured we could handle it ourselves, but it’s gotten kind of big, and that’s when you bring those teams on there to help you out. And we want to talk to people too, that’s the other thing. If you don’t want to talk to anybody, you don’t need a PR team. We want to talk to people, I want to talk to people, I want to get my voice out there, and these people have the contacts such as yourself that they can bring that will talk to me. I remember how hard it was to get interviews in the beginning, it was really hard, and now that I can get interviews I’m going to take them all.”

NWMS: “Would you ever consider playing bass for Megadeth?”

MK: “I have a profound problem with playing bass for Megadeth, in that the bass player for Megadeth is really good. I can’t play that shit, it’s really hard. David Ellefson is the bassist for Megadeth, and that’s the final word. Anyone else is a cheap and probably underpaid replacement for the real thing.”

NWMS: “So I wanted to talk about the new album, No Fixed Address. My son and I listened to the whole album together, and it was so much different from older Nickelback. You guys just were doing things I’d never heard Nickelback do before, like getting into some funk and even some soul in parts. Is that something you guys plan on doing more in the future, and what was the mindset of that?”

MK: “Well, more than anything it’s about trying new things. Maybe some of our older records were fairly one-dimensional, but later on in our career you hear different kinds of influences and directions in our sound, and it’s only going further in that path of trying new things, and seeing what we can incorporate into the Nickelback style. It’s always going to sound like us, so we can give it a shot to try different things and give it a go, and it was pushed out there even harder than last time. There’s lots of people that don’t like rap, so they won’t like it when they hear rap on “Keep Me Runnin’ ‘Round”, and there’s other people out there that don’t like funk, so they won’t like “She Keeps Me Up”, and that’s cool. People don’t have to like everything. People can’t like everything, and that’s fine.”

NWMS: “When there’s 20,000 people at a Nickelback show and you see all them out there, do you ever wonder how many of them are secretly bashing you to their friends, but they actually come to the show?”

MK: “Well it can be a little bit of a petty thing if you want to go down that road but I suppose at times you gotta think about it. You can stand on stage and think, “Well somebody’s lying.” We’ve got 50 million records in the tank, and you’re just like, “Mmm, I feel like someone’s full of shit here.” *laughs*

NWMS: “What was the first album you ever bought?”

NWMS: “That’s lacking a little bit in the music industry today. But even if somebody did that, do you think people would buy it?”

MK: “I don’t know. I think there probably are people doing that, and it isn’t getting past the gates. I gotta think there are prolific genius artists out there that just aren’t being heard, and it’s really sad. That’s the other side of the sword that cuts both ways, where if you have a vibrant music scene, and all this depth of talent, and you go out and see these people that are bleeding it, they’re living it, and they’ll never make it. It’s a crying shame, but there’s a value in that moment as well, in that club or wherever you’re seeing that artist. And that’s an experience that you gotta take with you, and that person and band may never know how big that impact was. And that happens to me all the time, when I see a person who’s just a creative genius that people aren’t even going to get it, and that’s the kind of shit that I listen to. The musical artists that I listen to are never going to get money, and they’re doing things that nobody at the record industries will want.”

NWMS: “What are some of your favorite bands that you’re listening to right now?”

MK: “I like Die Antwoord. I really love them. They’re featured prominently in the new film “Chappie”, I’ve noticed. They’re crazy as hell, they’re fucking great. It’s rap, but there’s a level of talent there that’s so extraordinary. I also really like Meshuggah. They’re one of the best bands on records, in my opinion. Really anything with an edge, I like.”