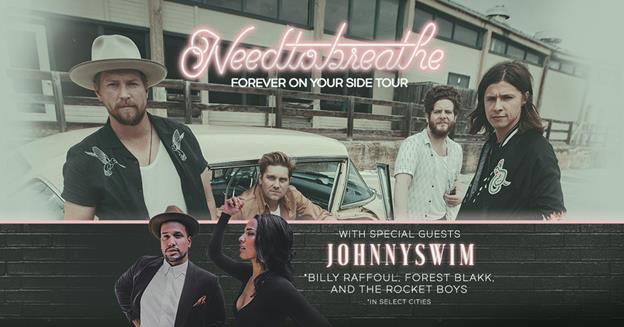 With a brand-new track, “Bridges Burn,” from their forthcoming collection of songs, Forever On Your Side (Niles City Sound Sessions), slated for release on July 13, South Carolina rock band NEEDTOBREATHE is doing what they do best—taking their music to their fans with the Forever On Your Side Tour.

The expansive 37-city tour, produced by Live Nation, kicks off Aug. 10 in New Braunfels, Texas and will make stops across iconic amphitheater and theater venues across major markets in the U.S. including Seattle at WaMu Theater,  Philadelphia, Nashville, Portland, and more before wrapping Oct. 7 in Daniel Island, South Carolina. Los Angeles duo JOHNNYSWIM will support the band on all dates.

Forever On Your Side (Niles City Sound Sessions) was recorded with the producer trio Niles City Sound (Leon Bridges) out of their studio in Ft. Worth, TX. The 4-track collection of songs and collaboration represents a creative leap for the band, who usually self-records and produces out of their home studio, Plantation Studios, in Summerville, SC.

“Coming off of one of the most adventurous records we’ve ever made, followed by two of the most challenging and ambitious tours we’ve ever put together, we wanted our next project to be something that took us even further out on a limb. These new songs document the season we’re in as a band right now. We’re extremely proud of it and wanted to put it out as fast as possible,” said NEEDTOBREATHE.

NEEDTOBREATHE first began exploring their various influences back in the early 2000s, soon after the Rinehart brothers left their rural hometown of Possum Kingdom, S.C. In addition to releasing a half-dozen studio albums and one double live album, the band has devoted the last decade and a half to continually touring, building a devoted and growing fan base that has followed them from their early days playing small clubs to the outdoor amphitheaters and arenas they sell out today.

Armed with a unique sound that has “carved out a niche in rock music” (Billboard) and had Rolling Stone dubbing the group “an anomaly in the pop music landscape,” NEEDTOBREATHE was championed by People magazine as “easy to love” for their unique mix of “infectious pop melodies to their signature Southern rock.”

With their latest headlining Forever On Your Side Tour, NEEDTOBREATHE embarks on a coast-to-coast journey that includes stops at Ascend Amphitheater in Nashville, the Greek Theatre in Los Angeles, and will aim for a fourth consecutive sell-out at Red Rocks Amphitheatre in Morrison, Colo.

ABOUT NEEDTOBREATHE
NEEDTOBREATHE is a GRAMMY-nominated rock band hailing from South Carolina, comprised of brothers Bear Rinehart (vocals, guitar) and Bo Rinehart (guitar, vocals), Seth Bolt (bass, vocals), and Josh Lovelace (keys, vocals). Their most recent album, H A R D L O V E, released in 2016 and debuted at #1 on the Billboard Top Albums, Top Current Albums, Top Rock Albums and Top Alternative Albums charts and #2 on the Billboard 200, their greatest debut as a band. H A R D L O V E is the follow-up to 2014’s Rivers In the Wasteland, which debuted at #3 overall on the Billboard 200 and spawned the RIAA-certified Gold single “Brother (feat. Gavin DeGraw).” The hit earned the group their first GRAMMY nomination as well as a pair of Billboard Music Award nominations. NEEDTOBREATHE, well known for their aggressive touring schedule and impressive live show, have spent the last three years crisscrossing the country on “TOUR DE COMPADRES” and “ALL THE FEELS TOUR.” Highlights include three consecutive sold-out shows at Red Rocks Amphitheatre, as well as Greek Theatre (Los Angeles), Ascend Amphitheatre (Nashville), Aragon Ballroom (Chicago), Verizon Theatre (DFW), and more. NEEDTOBREATHE will release new music and tour in 2018. For more information, visit needtobreathe.com.