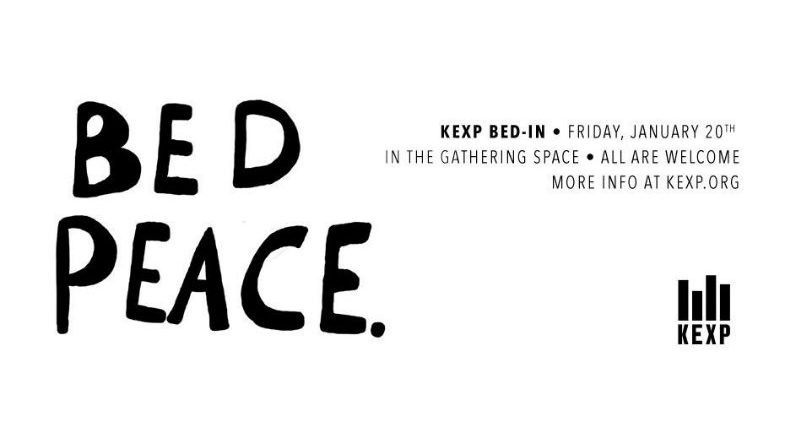 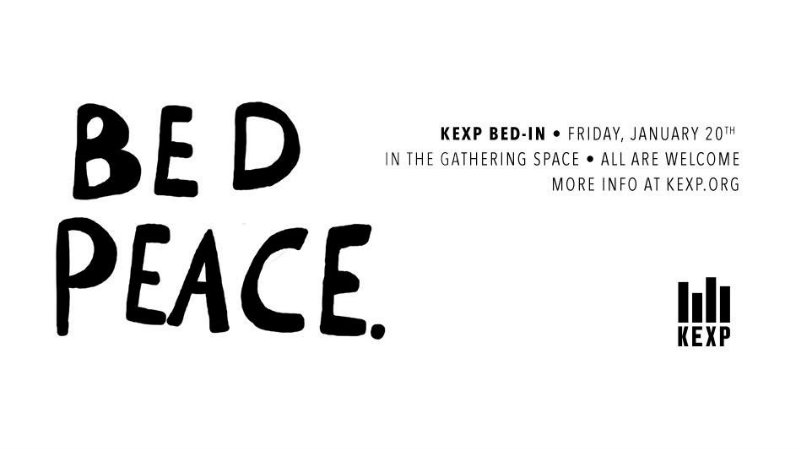 On Inauguration Day next Friday, January 20, KEXP will host a Bed-In for Peace, an event celebrating the rights, dignity, and freedom of all individuals or groups as defined by race, sexual orientation, or religion. All are welcome to join in celebration alongside community groups and non-profit organizations for a day of live music and community in the KEXP Gathering Space at their home in Seattle Center. Starting at 8:00AM PST, KEXP will host live music from local artists Wimps, Tomo Nakayama, DoNormaal, and Grace Love, culminating in a sing-along of “Give Peace a Chance” led by KEXP DJ Sean Nelson at 9:00AM PST.

Representatives from fellow non-profits Planned Parenthood, The Vera Project, ACLU of Washington, TeenTix, Gender Justice League, and Office of Arts and Culture will be on-site to join the celebration and provide more information about their respective organizations. KEXP DJ Riz will serve as MC during the proceedings.

“We’ve seen a lot of the country conflicted, confused and at odds with one another,” said KEXP Morning Show host John Richards. “KEXP has always felt through music and community we have a responsibility to make the world a better place. We, KEXP, are for love, we are for peace and that means supporting the rights and dignity and freedom of any individual or group, including minority groups as defined by race, sexual orientation or religion. Every day we stand with them under a big, inclusive umbrella. We do this in the spirit of John and Yoko and we do this in the hope that every last person on earth can achieve peace with one another. It is our proactive value statement that we feel deserves to be made on this or any other presidential Inauguration day.”

This celebration was inspired by Yoko Ono and John Lennon’s original Bed-In which began on March 20, 1969. As the Vietnam War raged, Yoko and John knew their marriage would be a huge press event. During 1969, they held two-week-long Bed-Ins for peace: one at the Hilton Hotel in Amsterdam and one at Fairmont The Queen Elizabeth in Montreal. Each of these was intended to be a non-violent protest against war, as well as an experimental test of new ways to promote peace. Their secondary objective was to treat these serious issues with humor. Yoko stated “our opposition, whoever they may be, in all manifest forms, don’t know how to handle humor.”

You can RSVP at the Facebook event page HERE and get more info about the event at the KEXP website.