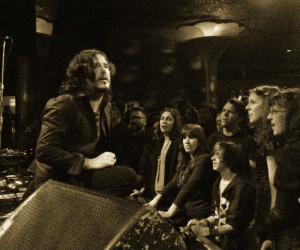 KEXP and KING 5 have collaborated to identify the 25 most important songs of the Pacific Northwest. Join hosts Saint Bryan and John Richards at 7:30 p.m. on Wednesday, March 2, on KING 5’s Evening as they pay tribute to great local music.

“People love countdowns. People love lists. And people here in the Northwest feel very strongly about local music. It was kind of surprising how strongly everyone at Evening felt about the song choices. I’m bracing myself for a huge response from Northwest music fans,” said KING 5’s Evening host Saint Bryan.

“The idea hit me when I heard a song on KEXP that ultimately didn’t even make the list – Fleet Foxes’ “Mykonos.”  It seemed like a great fit to team up with the local music experts at KEXP and combine their choices with ours to come with the greatest of the 25 greatest songs of the Northwest.”

“KEXP has been championing local music for over 40 years,” said John Richards.  “Cheryl, Troy and I wanted to highlight not the most popular songs from the Northwest, but great local music that made a difference and left a lasting impact.”

Listeners are encouraged to visit the KEXP Blog to vote for the artist they want to see at #1 in the Northwest Top 25.

John will play some of the Top 25 list, along with other great local bands and songs that did not make the Top 25, on Wednesday morning from 6:00 a.m. to 10:00 a.m. on 90.3 FM in Seattle or KEXP.ORG online around the world. Let us know what songs you think deserve to make the list, and which ones you speculate will be making appearances!