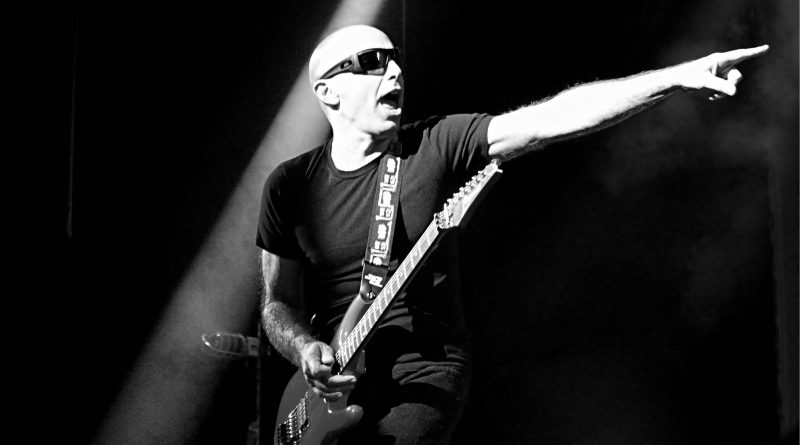 Joe Satriani is a guitar virtuoso and although that’s a pretty heavy title, Joe wears it well. I’ve seen him live a number of times and his fluid control of the fretboard puts him on the level of the absolute best that have ever picked up a guitar. Even though he has influenced an entire generation of shredders, he is about as humble and devoid of ego about it as one in his position can be.

Not only has his inventive style influenced the masses but as a guitar teacher he worked with well-known players such as Steve Vai,  Kirk Hammett and a host of others that are considered masters of the instrument. Joe has also lent his talents to tours with Mick Jagger and Deep Purple and as of late, an ongoing side project called Chickenfoot with Sammy Hagar,  Michael Anthony and Chad Smith.

As far as his own music, Satch (what his adoring fans call him) has done things his own way since the 80’s, starting with his first solo release, Not of This Earth in 1986, and he’s still rolling with his 2015 release Shockwave Supernova, his 15th studio album. Joe tells me that they have some surprises planned for the latest tour that kicks off in Seattle on Feb 25th at The Paramount. Get tickets HERE.

NWMS: “Last year in a period of a few months, I got to see Pat Travers, Michael Schenker, Eddie Van Halen, Kenny Wayne Shepherd and Robin Trower. If you had to pick a favorite out of those who would you pick?”

J: “Those are all players that played stuff that really touched me and stuck with me. That’s what it is about really great guitar players, sometimes it’s just a part of a song, or something as powerful as a whole album or period, and it just gets lodged in your heart. I was into Procol Harum when I was a young kid, inheriting my older sister’s record collection, so I was a fan of Robin’s as a young kid. I have his musicality as part of my foundation. I was a complete Hendrix nut, so I really loved the fact that he, in a very interesting way of paying tribute to Jimi Hendrix, had, as a solo artist, taken that turn, where he just went ultra Stratocaster, ultra bluesy Hendrix sorta thing. Anytime Chickenfoot’s been on tour, playing Trower’s stuff during soundcheck has always been stuff that we did, and it’s a cool thing. It seems like every month or so I’m playing something that Robin did.”

NWMS: “One thing I’ve always admired the way you handled your career, that you’ve just always done your own thing. With your chops, you could have done all sorts of more radio friendly stuff, but you just have always done your own thing, and it’s still been real popular. Do you think that this attitude you’ve taken has been a big secret to your continued creativity over the years?”

J: “I think so. It’s really interesting how, when you get hit with roadblocks and adversity in your quests, they can be really frustrating when you’re in the middle of it, when you’re confronting them. But they can turn out to be fortuitous moments. They present to you crossroads where you have a choice, and I suppose in my 20s, I struggled as many budding young professional musicians do, trying to get a career going somewhere, and one of the things that happened to me was that I was rewarded for doing something that was completely non-commercial, that I had done purely for artistic development. And I was doing it right alongside the other part of my career, which was doing the right thing: getting a good haircut, wearing the right clothes, going to rehearsals, playing club shows, courting the industry down in Los Angeles.

“That led me nowhere, and all of a sudden, somebody said, “Hey, that crazy thing you just did was the coolest thing ever, can you do that again?” And I was so shocked, but I thought, “Yes, I can do that; that’s the real me.” Here’s the thing that really made it all click was that during those ten years of ultimate struggling: really from ages 20 to 30, I had a lot of time to figure out how to publish myself, start my own record company, basically learn how to keep your artistic ideas at the highest level while you’ve got your nose to the ground, trying to pay rent and find money for food and gas and everything else. Then all of a sudden I was rewarded for the quirkiest stuff I ever did, and I was kind of ready, I was a grown-up by then. I think if it had landed on my plate when I was 20, I probably would’ve blown it. By the time good fortune landed, I was already on my way to being an adult, and I think that gave me a perspective that said, “Wow, this is really cool. I can be quirky, I can be myself, and I shouldn’t let anything change that.””

NWMS: “When there are lyrics in songs, the names are obvious, because a lot of times that’s what the song’s about. But with an instrumental, how do you come up with the name for the songs?”

J: “Well it’s pretty simple. I can be sitting down, let’s say on a morning like today, I could look out at my backyard and be struck by, say, the resilience of a tree. And I can think about that one word, ‘resilience,’ and I think about what that means in life. Maybe I think about my parents, or somebody recently in the news, like David Bowie, who was very resilient in his career. And I might walk over to the piano and start playing a song based on this inspiration that started with the weather, moved to the backyard, moved to my family, and then onto David Bowie, and then I would write that word down on a piece of paper, and sit down at the piano and I would write this song based on how the word ‘resilience’ was inspiring me, and who I was thinking about, and that would become the name of the song. That’s a serious subject, but sometimes it’s something silly, like “Surfing with the Alien,” or something just simple and fun like “Summer Song,” but sometimes it’s about people that are lost or something that you just completely make up, a complete fantasy. It could be something intellectual, something visceral, something spiritual but these titles usually come first, right when I’m inspired. And sometimes they need a little tightening up because they may be like 7 words long, and so then over time I learn how to refine the title, but generally the title comes with the inspiration.”

J: “Yeah, it looks like we’re going to do a show in the middle of May. I don’t think it’s public yet, but I don’t really care if you mention it. We’re getting together, just one show, the original band – I think it’s a Lake Tahoe show – we’re kinda working around the schedule of Chad, who’s got a rehearsal schedule at that point with the Chili Peppers, I’m in between my US and European tours, and I know there’s a Benioff Children’s Hospital benefit that I do with Sammy and James Hetfield, which comes up about a week before that.  And then we’ve got a track that’s pretty much done, it’s about 99% finished. We actually recorded a song; we’re the slowest working band in history, we take forever. But there is stuff happening, and we’re still laughing and communicating.”

NWMS: “Chad has came out in favor of Bernie Sanders. I’m curious whether or not you’re feeling the Bern yet.”

J: “I’m encouraged by Bernie Sanders. I’m a little discouraged by the choices presented to the American public this time around. I was a supporter of our president Barack Obama. I’d love to see the Republicans join the team a little more, trying to help the lives in America. It’s been really frustrating. I’ve never voted in that direction. Ever since I was a young kid, my parents were democrats, and so that’s where I’ve leaned. It’s almost like after a while, you go, “Enough of those people, enough of the Bushes and the Clintons.” There’s certainly things that they’ve done that’s just too much, like what we don’t like about politicians. I was really hoping that some knight in shining armor would show up and we’d go, “Oh, finally.” But there are some crazy people running for office, starting with Trump and all the way down.” So Bernie, I think that he’s probably the clear choice but on the other side of the fence that is about the craziest clown show I’ve ever witnessed as an adult. There have been some crazy people running for office right now, starting with Trump and all way down.  “Those are some crazy people”!”

NWMS: “The tour starts in Seattle on February 25th. Tell us something that’ll blow our minds, and what we can expect on tour.”

J: “The cool part about this tour is I think people will be blown away by the setlist. We’ve been calling it the “Surfing to Shockwave Tour,” but actually we’ll be playing stuff from the first record, Not of This Earth. I think that this band, the two guys from The Aristocrats, Bryan Beller on bass and Marco Minnemann on drums, are just over-the-top amazing musicians, and Mike Keneally will be playing more guitar. We’ve been spending a lot of time standing next to each other just kinda going crazy on stage. The setlist, I think, is so wonderfully broad and very well-balanced over my career, that I think it’s got more fireworks and emotional power than we’ve been able to handle before. We’ve toured for like three years collectively now, which is a lot of time actually as a group. These guys came out with me on the Unstoppable Tour, and that was kinda how we got to know each other as a group, and we spent nine weeks in Europe last year doing this particular tour, a little shorter version of it, but then doing this particular tour is “An Evening With…” so there’s no opening band, so we’re really taking the stage and controlling the environment, and I think this format allows us to play more music for the fans and put on a more dynamic show.

“It looks better, it’ll sound better, and I think the band is better than ever.”