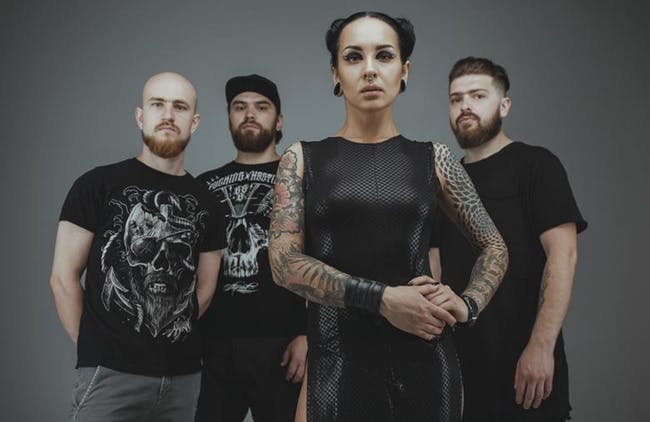 Jinjer to appear at El Corazon on Nov 1st

Jinjer at El Corazon . Special Guests include The Browning and Sumo Cyco.

JINJER is a Ukrainian female fronted band which plays a mixture of progressive metalcore and groove metal, with some inlays of funk, reggae and jazz, though on their second LP the band shifted a bit to death metal of the European school. JINJER were formed in 2010, when Tatiana Shmailyuk joined the guys as a vocalist. In 2013, the band were acknowledged as the best metal band of the year in Ukraine.

JINJER are often mistakenly compared to Iwrestledabearonce, Straight Line Stitch, Arch Enemy, etc. Which is completely wrong, as members of JINJER, being asked about their influences, always name such bands as Lamb of God, Pantera, Gojira, Killswitch Engage, Death, Chimaira, All Shall Perish, Protest the Hero. However, Tatiana says that she really appreciates Sandra from Guano Apes and Shamaya from Otep for being her biggest inspirations as a female metal vocalist. She also mentions Mikael Åkerfeldt from Opeth and Randy Blythe from LOG.

In April 2014 JINJER released their second LP – CLOUD FACTORY. The album is devoted to the devastating effect of the heavy industry and global businesses on the environment,nature and average people’s lives.

To support CLOUD FACTORY album the band went on a long European tour in April-May 2014 around Poland, Germany, Czech, Belgium, France, Switzerland and Russia. JINJER have shared the stage with TIAMAT, PAIN, CALIBAN, EKTOMORF, CLAWFINGER, EVENASCENCE, RASMUS, KATAKLYSM, BLESS THE FALL, etc. Over three years of touring JINJER have played more than 300 shows around the European Union, Russia and Ukraine. The band is a common participant of many top open-air festivals in Ukraine and the EU.

The Browning could very well be heavy music’s answer to the Terminator. Whereas everybody’s favorite Arnold Schwarzenegger cyborg hid an exoskeleton under a sheath of skin, the Kansas City quartet—Jonny [vocals, electronics], Cody [drums], Brian [guitar], and Rick [bass]—thinly veil a hard rock edge beneath a casing of skittering electronic dance music, hip-hop grime, metallic brutality, and industrial expanse. That signature style is “back” in a big way on their third full-length album and first for Spinefarm Records, Isolation.

Since emerging with a bang on 2011’s Burn This World and refining their attack on Hypernova in 2013, the group has destroyed stages alongside everybody from Fear Factory to Static-X to We Came As Romans to Alesana to Chelsea Grin to Shadows Fall on national tours. Hypernova would clinch “Album of the Week” honors from Revolver, while their fan favorite video for “Bloodlust” would rack up over 1.8 million views by 2016 as they built an impressive social media audience exceeding 212K Facebook fans.

Punk rock metal band based in Hamilton, Ontario. Formed in 2011

MASSACRE AT THE OPERA

Four guys from opposite ends of the metal spectrum who have come together to make a truly brutal sound. We are Massacre At The Opera.

Massacre At The Opera started out in early 2011 with the drive for hard hitting, fast paced metal.These group of guys are hitting the local scene with the force of a battering ram. With Chris Gumeson added to the line up in late 2012 on vocals, this group has come into their own. From playing their first show at The Central Ave Pub, winning the Seattle battle of the bands finals, opening up for Silence The Messenger and Sworn Enemy, playing their first out of state show at the Hawthorne Theater in Portland, To releasing their first EP titled “Mental Decay”. With their all or nothing attitude, this group will rock your proverbial face off.

GHOSTS OF THE PACIFIC

Ghosts of the Pacific is a Seattle based hard rock band that pulls roots from the rich history of the Seattle music scene. GOTP creates original hard rock songs with a metal energy and spirit. GOTP puts on a high energy live show, we integrate visuals and theatrics to bring a local rock show that stands out above the rest. We understand that even though the audience is coming to a local rock show, they expect to be entertained as if they were going to see a big budget touring band.

Ghost of the Pacific was founded by Sean and David Kebely in the late summer of 2016. The bands original lineup consisted of; Josh Williams on vocals, Sean Kebely on guitar, Francis Hunnycut on bass, David Kebely on Keys and Brad Turner on Drums.

In December of 2016, it was mutually decided that drummer Brad Turner would leave the band to pursue other musical interests. Michael Ball was the first drummer we auditioned that same month. He showed up completely prepared and ready to rock. He was such a good fit that we didn’t feel the need to audition anyone else and he was officially named in January of 2017.

Bassist Francis Hunnycut decided it was time to move on and focus on other areas of his life. Kyle McClelland filled in for a couple of shows but Francis eventually came back to rejoin the band on an interim basis until we could find a suitable replacement.

Several bassists auditioned in an attempt to fill Francis’ spot. When Tom Evans arrived for his audition and began playing with us, a wide-open pocket was created and his powerful, edgy sound was an awesome fit. Tom was officially announced as the new bassist early that September. Tom played with the band for a year before deciding to move on.

With the bass player spot being up for grabs once again, we recruited long time friend and videographer of the band Paul Cary. With Paul having a history with the band shooting our first two music videos and being a general fan of the band, it was an easy transition.

Our first studio album, the Human Machine, was released April 20th 2019. The recording line up for the album consisted of; Josh Williams on vocals, Sean Kebely on guitar, Paul Cary on Bass, David Kebely on keys and Michael Ball on drums. We came up with the concept for the Human Machine during the writing process of the album. We decided to tell story through a 3 part music video trilogy.

Shortly after the release of our album “Human Machine” bassist Paul Cary announced he would be parting ways with the band to focus on raising his new born son. Drummer Michael Ball also announced plans to move to Japan to pursue his career goals. Evan Ingalls was the first bassist we auditioned and new immediately that he was the man for the job. Evan is the youngest member of the band. Evan brings a much welcomed energy and discipline to the band. Jody Harstad fell into our lap completely by chance. We needed a last minute fill in for a show and Jody stepped in to help out. The very first practice with Jody felt like he had been playing drums for Ghosts since day one. Jody was as excited to join the project as the band was to get the privilege to play with such a seasoned professional.

Derived from the drizzle and gloom of Seattle, Washington. We are Black Sun Moon.Originally, Black Sun Moon was created in the basement of an old house with Cody and Eric sitting in front of their computer, tabbing out guitar and programming drums. Taking influence from our favorite groups such as; Karnivool, Dead Letter Circus, Thrice, Soundgarden, Opeth, Between The Buried And Me, ect. Many a case of delicious beer/band juice was slain in the efforts of finding our sound. We even slept on the kitchen counter for absolutely no reason. That, my friends, is dedication. After some time and many genres ventured, we arrived. The name Black Sun Moon was the title for a song written for the project. A few head nods later, it was agreed that we would now be known as such. With countless hours tinkering away in our rehearsal space, we were on to something. Something very special. One fine evening as if a gift from the heavens themselves, we heard an angelic knock on our studio door. There in the doorway, stood our lovely bassist, Craig. (Not really, we found each other on a Facebook forum) Recently transplanted from Pheonix, AZ. Craig brought to the table much musical experience and talent. Thus, Black Sun Moon was whole. With all our our stars aligned and the wind at our backs, we set sail on the music scene. Ready to share the stage with many amazing artists and share ourselves with all our wonderful fans!

2009 Hot Rocks Music Awards – Peoples Choice winners for Best Band and Myspace. Brutal and insanely fast with a touch of groove and melody. Having 2 vocalists and 2 guitarists opens the band to a lot of layering and unrestrained creativity.

Kill Closet is a 7 piece metal band from just north of Seattle Wa. Reformed in 2007 we have since gone through some member changes and played over 100 shows. We released our first cd in 2008 and in 2009 we won the Hot Rock’s People’s Choice Awards for Best Band and Myspace along with placing 18th in the nation in the Project Independent competition. 2010 began with drummer issues and ended with us working with our new drummer Bryan. We have since added Neil on percussion, keyboard and samples as well as Keith who runs our new light show and manages the band. In 2012 we released our 2nd self produced cd, a concept piece about a bio-plague that becomes self aware entitled Our Own Making. We have had the huge privilege of an overly devoted fanbase and have had the opportunity to share the stage with Anthrax, Testament, Death Angel, He’d P.E., Mushroomhead, Children of Bodom, Fleshgod Apocalypse, Carach Angren, Abigail Williams, Nekrogoblikon, P.O.D., Tyr, Chimaira, Threat Signal, The Browning, Dark Sermon, Carach Angren, Livan, Kittie, The Agonist, Blackgaurd, Bonded By Blood, Soulfly, Doyle, American Me, Suffokate, Murder Death Kill, Hundredth, Walking Corpse Syndrome and countless amazing bands in our area. If 2017 is anything like the last 9 years we can’t wait to see what it brings. Hope to see you all soon!!

Helping keep old school metal alive in the Pacific Northwest, Salem Knights has been bringing an intense energy and fury to their live shows since 2015.