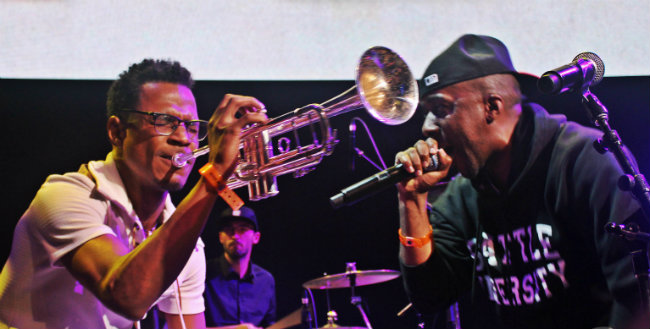 Playlist Seattle returns in April with the fourth in their ongoing series of music-inspired theatre. Volume IV comes with the theme “Women Who Rock,” and sees the company expanding their program to three nights of theatre and music, each featuring a special acoustic performance by one of the musicians highlighted. Seattle sirens Jamie Nova, Whitney Mongé and Amanda Hardy will take the stage along with the actors dramatizing their work. The show runs April 14th through the 16th at The Homestead in Ballard.

Since its founding in 2014, Playlist Seattle has created original plays and performance pieces inspired by a range of Seattle bands, from legends like Hendrix and Nirvana, to current artists performing in the scene today, such as Ayron Jones and Kris Orlowski. The company was part of the TPS Stage at Bumbershoot last year, and performed a flash mob-style piece at the request of Seattle rock band Into The Cold during their show at The Crocodile. Playlist Seattle is also a member of Shunpike and has received support from the Seattle Office of Arts & Culture.

For this next Playlist, Director Kelly McMahon says she is excited to be able to invite three musicians to be part of the series. “Playlist Seattle was founded on my desire to really connect with musicians who are performing in the city today. When thinking about expanding from our one-night-only format to a series of more performances, the main goal was to involve more of the musical artists I’m inspired by – both creatively and personally. I’m so happy we will have the opportunity to do so in this production.”

Jamie Nova has been described as a blend of Melissa Ethridge, Janis Joplin and Ann Wilson; and her music has been called fresh, touching, fun, and filled with passionate lyrics andsoul. Also the lead singer of the metal band Witchburn, Jamie began releasing “softer” music first as a solo artist, then bringing musicians in to form Jamie Nova Sky. The band includes JT Phillips on Lead guitar, Rick Friel on Bass and Chris Kiger on Percussion.

Alternative Soul artist Whitney Mongé was once known for being the “Best Busker in Seattle.” Her music has since transcended to a national level supporting acts such as Ziggy Marley, Allen Stone, Lukas Nelson & The Promise of The Real, Crystal Bowersox, and X Ambassadors. Catching the attention of the masses with her dynamic voice and heartfelt performances, Whitney’s music is often compared to Tracy Chapman and Alabama Shakes.

Amanda Hardy is a singer/songwriter whose career began at the age of thirteen when she was discovered off the internet covering the Alice in Chains song ‘Brother.’ Since then she’s been writing music and performing shows all over the Seattle area including opening for national acts Rob Zombie, Godsmack, Lacuna Coil, Sick Puppies, Anna Nalick, Styx and Queensryche. Amanda is also in Robert M. Knight’s Brotherhood of the Guitar. More recently she has been working on a new album with Grammy nominated producer Warren Huart. Through Robert and Warren, she was introduced to Yamaha Artist Relations who have taken her on as one of their artists.

The Playlist Ensemble will create 4-6 pieces inspired by each of the three musicians. Depending on the show, the “playlist” of theatre pieces will change, leaning more toward the musician who will join the theatre artists that night. Jamie Nova Sky will play Thursday, April 14th, Whitney Mongé is scheduled for Friday, April 15th, And Amanda Hardy joins Playlist for the Saturday show, April 16.

Playlist Seattle: Women Who Rock will be presented at The Homestead – 6541 Jones Avenue NW in Ballard – April 14-16 at 7:30pm. Tickets for the show are available via this location. Admission is $15 for an individual show, or $30 for a pass to see all three performances. More information about the show and Playlist Seattle can be found through the organization’s website.