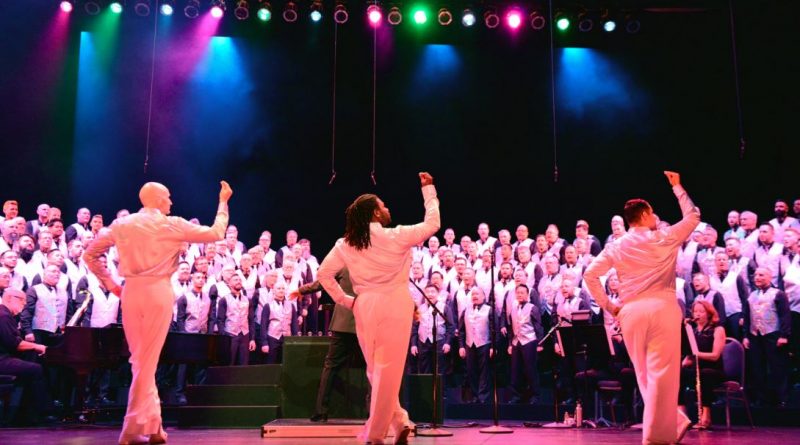 NWMS:  How have you seen the notions on Cher grown and change over the years?

Steven Smith:  Cher embodies the American notion of reinvention. From the breakup with Sonny [Bono], to her solo career, to the movies, to Vegas, and to her edgy Twitter account, she has kept herself relevant.  She has never undervalued her own personality and talent. I think that’s one of the reasons why she’s become a gay icon. She is unapologetic about being herself and she dares you to meet her where she is.

NWMS:  How did the kids from Washington Middle School get involved?  Are they only in for one night?  What will they bring in?

Steven Smith:  We’re in our third year collaborating with the choral program at Washington Middle School. Our singers join the students for six weeks of rehearsal, creating an inter-generational chorus. In the first year, we went in thinking we’d serve as LGBTQ role models and teach them about acceptance–it turned out they taught us! We all learned about courage, standing up to bullying, finding your own voice, and the challenges of growing up today.

Washington Middle School [singers] will be featured in the Sunday matinee performance only.  They are all excited to sing at McCaw Hall for a large and appreciative audience. Their appearance will be a short detour from Cher; they are singing a new piece that the students wrote collaboratively with composer Jim Papoulis. Later they will join ranks with the full Men’s chorus to perform Cher’s “You Haven’t See the Last of Me.”

NWMS:  How did Chad Michaels get involved?  What will he contribute?  Are Cher impersonators widespread?

Steven Smith:  With her outrageous costumes and wigs, lots of people–drag queens and civilians–want to be Cher. But as the winner of RuPaul’s Drag Race All Stars, Chad is actually considered to be the champion Cher impersonator. The chorus will sing the hits and Chad’s going to contribute the dresses, glam, and edgy sass that defines Cher.

NWMS:  How did the SMC decide on a Cher show?

Steven Smith:  Artistic Director Paul Caldwell and our team are always on the search for concepts that allow us to have fun with pop music in a way that also speaks to the experience of the LGBT community. Cher is at the obvious center of that Venn diagram for her timeless music and social activism.

As we were making the decision to program a Cher tribute last year, we hit a zeitgeist. We announced our season of shows just as news was breaking about her appearance in Mamma Mia!  Here We Go Again, and premiere of the new Broadway musical The Cher Show. Her award at the Kennedy Center Honors this December was the icing on the cake.

NWMS:  Which songs can we look forward to hearing?  How are you handling the Auto-Tune on “Believe”?

Steven Smith:  Cher’s hits span the ‘60s to today, so we get to sing everything from “The Beat Goes On” to “Believe.” One of the amazing things about Cher is that her songs always sound like the era she recorded them in. I’m not saying we’ll auto-tune the chorus, but it will sound like you expect! Also on the playlist are “Gypsies, Tramps and Thieves,” “Bang Bang,” “Strong Enough,” “If I Could Turn Back Time,” and a bunch more. A tribute to Cher is really a ride in a time machine.

NWMS:  What can we look forward to from the Chorus in the future?

Steven Smith:  On June 21st and 22nd, we will commemorate the 50th anniversary of the Stonewall riots by premiering a new music theatre work about the history and legacy of Stonewall. The piece has been co-commissioned by more than 20 LGBTQ choruses around the country. A mix of gay, lesbian, transgender, and black songwriters are weaving many stories together about the spark of the gay rights movement.

The concert is called Summer of ’69 to place that story in the psychedelic swirl of what was happening. During that one summer, 50 years ago, we not only experienced Stonewall, but also Woodstock, the moon landing and the Vietnam protests. The show will be like you turned on the radio with Marvin Gaye’s “I Heard It Through the Grapevine,” “Sugar Sugar” by The Archies, “Put a Little Love in Your Heart,” “Sweet Caroline”, and so much more. When you think about today’s political divide, 1969 might actually have something to teach us.