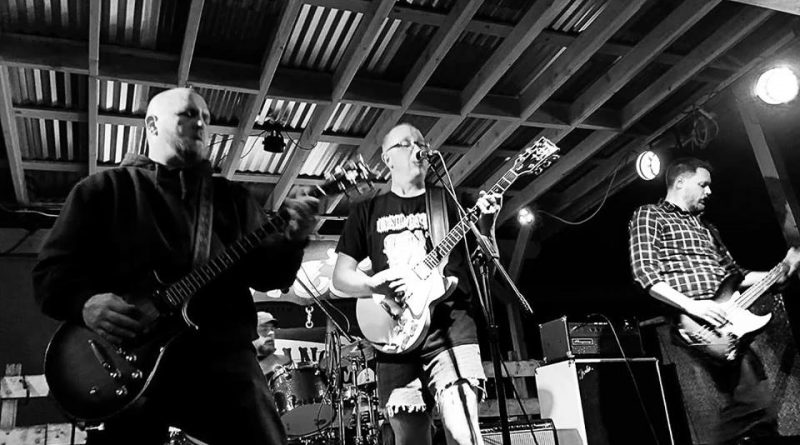 Peripatetic but passionate guitarist Sean Moe put together the Stereo Creeps to push his favorite obsessions with thankfully like-minded individuals. Their new album Suck dropped back in April, and they’ll hit Wally’s Tavern in Wenatchee on Saturday, June 15th.  Moe was considerate enough to take some questions.

NWMS:  Are you originally from Seattle? If not, where did you grow up and when did you arrive in Seattle?

Sean Moe:  I was born in Seattle but I have lived all over the Northwest. My family moved to a small town up north when I was a kid. I was a bit of an outcast growing up there because I liked “weird music” but as much as I hated growing up there it made me strive for underground music and made me get into metal and punk.

NWMS:  What music made you want to make music, growing up?

Sean Moe:  The first music I listened to as a very young kid was The Beatles, Isaac Hayes, Curtis Mayfield, and Elvis Presley. I got into my parents’ record collection and those were some of my favorite artists very early on.

I really got into metal after that. Bands like Iron Maiden and Judas Priest were really exciting to me. The album that totally changed my life was Led Zeppelin II and then I discovered punk rock like The Sex Pistols and The Damned. For me it was hard rock & metal first and then punk rock. Local bands like Mudhoney, Slam Suzzanne, TAD, Nirvana, and Soundgarden really inspired me to be in a band.

NWMS:  What bands were your first? How did you find your bandmates, and where did you play?

Sean Moe:  I started my first punk band called Psycoshits just out of high school. Stereo Creeps’ guitarist Robert Dollison was actually in that band with me all those years ago too. He and our bassist at the time were both fellow “music weirdos” from my school. We found our drummer by putting an ad in the now-defunct The Rocket magazine. When we first started playing out it was at parties, grange halls and eventually local clubs.

NWMS:  What are your favorite and least-favorite things about the Seattle scene?

Sean Moe:  I love how varied the local music scene is. There are so many great bands and talented musicians out there. I just wish the different genres would support each other more. I like putting together what some people call mixed bills. I try to put on shows that cover a lot of ground rather than a bunch of bands that all kind of sound similar.

NWMS:  What are your best, worst, and oddest stories from playing live?

Sean Moe:  The weirdest stories from playing on the road or locally are almost always after the gig is over. It is usually due to overindulgence in alcohol. That may be one of us or someone at the venue or both. A few fights have happened but luckily not too much.

I get heckled once in awhile but I kind of enjoy it. One time a guy kept messing with me so I said “Why don’t you come up here then and you sing!”. He didn’t want to but I insisted. He finally came up and was a drunk idiot and everybody laughed at him. It was great.

NWMS:  How did you put the Stereo Creeps together?

Sean Moe:  Stereo Creeps came together out of the ashes of the previous band I was in  called American School of Warsaw. Once that band ran its course I decided I wanted to play guitar and write songs with the bassist Mark Wardell and drummer Tim McAnally from ASoW.

We went through a few guitar players until our old friend Robert Dollison moved back to the area. After Tim left the band we went through a few drummers and now we are playing with Kai Strandskov and we couldn’t be happier. Kai came in after most of the tracking for our latest album Suck was already done.

NWMS:  I hear punk, post-punk, and some metal in the new songs. Which influences are the most important to the band and how?

Sean Moe:  The initial idea for Stereo Creeps was to encompass all of our favorite influences from all of the different rock n’ roll eras and just throw it in a blender and see what would come out. Artists like Killing Joke, The Stooges, David Bowie, Prince, The Beatles, Radiohead, Soundgarden, The Ramones, Queen, The Flaming Lips, Sonic Youth, Flipper, The Beach Boys, The Melvins, and Queens of the Stone Age are very influential to our sound just to name a few but I don’t think we sound much like any of them.

I think that’s the beauty of mixing it all up. The end result kind of just sounds like Stereo Creeps.

Sean Moe:  We started recording Suck at Soundhouse in Ballard with local musician/engineer Mikel Perkins who also performed the drums on the album before Kai joined. After the initial tracking we took the rest of the album over to our good friend and recording/mixing wizard Don Farwell at Earwig Studio in Wallingford. All of the vocals and fun overdubs were done there. Don mixed the album and then we had it mastered at Black Belt Mastering by Levi Seitz. Levi also cut the lacquers for the vinyl LP.

NWMS:  What are the band’s plans for the future?

Sean Moe:  We are getting ready to record a couple more singles soon with Don at Earwig. We lovingly refer to him as 5th Creep and he is like another band member in the studio. Our next two songs are gonna be quite different. They are a little longer and more epic, with a classic vibe.

After that I think we are going to do a bunch of really fast and crazy tunes that we’ve been working on for a bit. We love to create and write a lot of material so that’s what we’re gonna do!